Long-term treasuries continue to be one of the most fascinating areas of the markets to me right now. After a blowout 2014 when long bonds were up nearly 30%, they’re up another 3% in the first week of the new year as interest rates continue to drop. It’s almost like long maturity bonds have become a momentum stock that can’t be stopped.

Since no one can predict where interest rates are going over any reasonable time frame, I’m more interested in how these securities will perform over the long-term, since that’s where investors should be focusing their time and efforts.

Long-term treasuries currently yield well under 3%. I looked back at the historical performance data for long-bonds to see how the future performance was affected by the starting yield level. Here are the results over 1, 5, 10 and 15 years using quarterly yields as the various starting points: 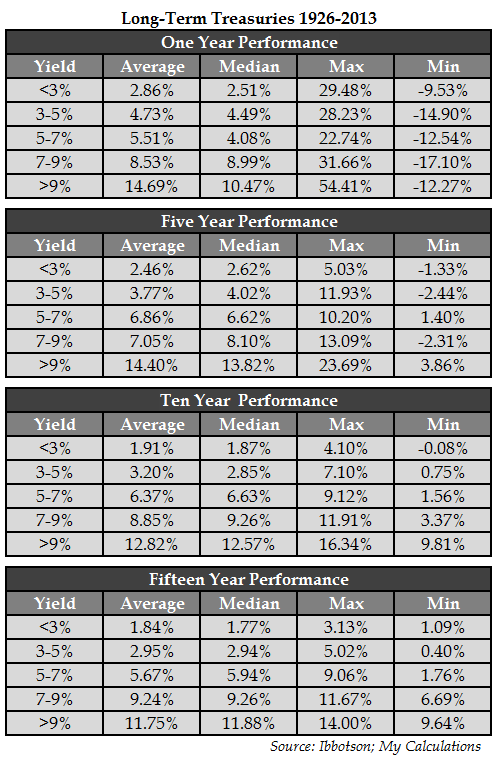 There’s an obvious relationship between the starting yield and the future performance, especially for the longer time horizons. The ranges between the highest and lowest returns are also much smaller over ten and fifteen year periods than they are over one and five years. Over any one year period you could potentially see huge gains in long-bonds, but over time the math of the yield and fixed income structure tends to win out.

Looking out ten and fifteen years from rates at similar levels as we are witnessing today, you can see that the annual returns have been less than 2% per year, on average. But over longer time frames bond investors also have to be aware of inflation risk. With that in mind, here are the ten and fifteen year results after accounting for inflation: 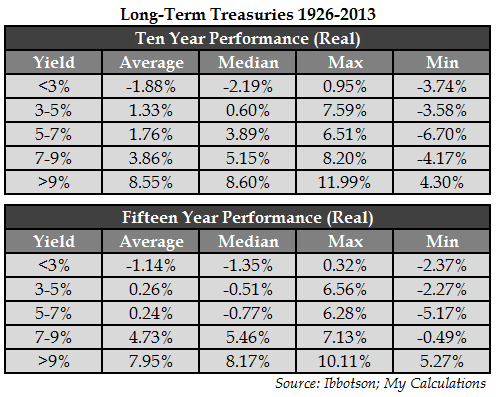 This shows why inflation is a bigger risk than an increase in interest rates to long maturity bond holders. The average and median real returns for yields under 3% over ten and fifteen years were annual losses. Even the very best performing periods were only slightly positive in the lowest yielding category.

The recent returns in the iShares 20+ Year Treasury ETF have been impressive — nearly 12% per year over the past five years and over 8% a year in the past ten. But five years ago the yield was almost double the current level and ten years ago it was around 5%. Now it’s half that.

No investment is without risks. Treasuries are backed by the full faith and credit of the U.S. government so repayment of principal and interest is never going to be an issue. However, at today’s yield levels, inflation and interest rate risk have to be accounted for. So while there could be one or even five year periods where longer maturity bonds perform fairly well from these yield levels, over the long-term they’re likely to be a poor investment in terms of earning a decent return over the rate of inflation.

Many bond investors have learned the hard way over the past few years that predicting the direction of interest rates can be extremely difficult. Determining your bond maturities by matching them with your future liabilities is a much more rational approach to portfolio construction than trying to guess when long or short yields are going to rise and fall.

Further Reading:
Are We Witnessing a Melt-Up in Long-Term Bonds?
How the Markets Tempt Us Into Making Mistakes