I recently got my hands on some longer-term market performance data over 15 and 20 year time frames through year-end 2014. I love digging into this kind of long-term data and there were some numbers that immediately stood out to me. Here are those numbers with annual returns over a wide variety of markets and styles: 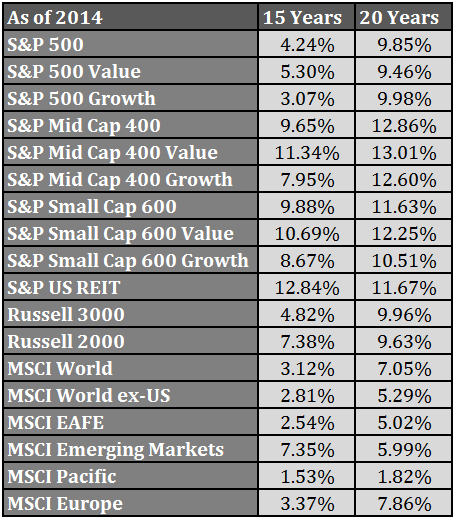 You can see that U.S. markets have been the big winners over these periods with small and mid caps leading the way. The only place where value didn’t outperform growth was in large cap stocks, but U.S. stocks have some very respectable 20 year return numbers. On the other hand, international markets have been noticeable laggards with the U.S. making up the majority of world equity market gains.

These are long time periods so you would think you could take this data at face value and come to some fairly certain conclusions about the various markets. Anyone that looks at these returns would assume global diversification is a sucker’s bet and that U.S. markets are the only ones that make sense.

For the opposing viewpoint, I decided to look at a handful of these same markets, but changed the end date to 2007, just before the U.S. relative outperformance started. These are the 15 and 20 year annual performance numbers through 2007:

If you would have looked at these same numbers at that time you would have concluded that many of the foreign markets offered much better long-term return prospects than the U.S. markets.

A few thoughts on each set of return numbers:

Historical market data is interesting, but I always say that it does a much better job of helping investors prepare for future risks as opposed to being able to guess what the future performance will be.