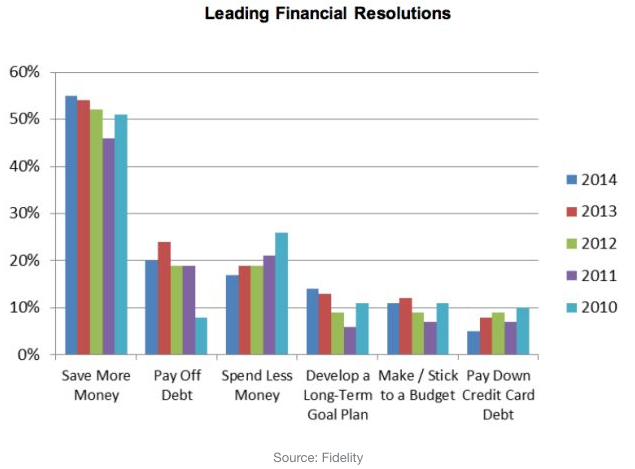 Save more money is consistently at the top of the list year in and year out, yet the savings statistics in this country are always terrible. This is because saving money is simple. Prioritizing is the hard part. It’s very easy to clip coupons or cut back on lattes to save money, but those little things don’t get you anywhere. They’re not going to make a big dent in your budget. To truly save money you have to focus on the big picture issues, including things like housing, transportation and making more money.

Most people spend more on transportation than they realize. In Happy Money: The Science of Happier Spending, the authors show that the average American worker will work 500 hours a year (or 2 hours out of every work day) to pay for their cars. This all-in cost includes gas, maintenance, plate fees and insurance costs. Because of these costs, the average household spends almost 20% of income on driving expenses. For low-income families, it can be as high as 40% of income.

Now take a look at the average transaction price of a new car from the Washington Post:

Is the new car smell really worth one-fifth of your income? A 4% car loan spread out over a 5-year term at the average cost is almost $600 a month. This is just an average, but it shows you how high the costs of car ownership can get, and this is before you add in the ancillary costs.

New cars lose around 10% of their value the moment it’s driven off the lot. After the first year, a new car depreciates by another 20%. Owning a car for five years leads to an average of a 60% loss from the original value.

Some will object, “But that new car will make me happier.” University of Michigan researchers looked into this and found that this wasn’t the case when they asked drivers to rate their experience:

Although their cars ranged widely in value, from around $400 (a Yugo, perhaps?) to $40,000, there was no relationship at all between the Blue Book value of the car and the amount of enjoyment the owners got from driving it that day.

In fact, they found that most people liked the narrative of driving a nice car more than the actual driving experience itself. People said they enjoyed driving expensive cars more when asked to describe the make, model and year. But this narrative didn’t translate when they were actually driving. It was more of a status symbol in their head than anything else. As with most things, the novelty wears off from a big purchase sooner than we think.

Another way to cut costs and improve happiness is to move closer to work to cut down your commute. A study showed that your income would need to rise by over a third to offset going from no commute to a 22-minute commute.

I’m not big on telling people what they should or shouldn’t be spending their money on. There are car people out there that absolutely have to have nice cars. That’s fine, as long as you are saving and have the rest of your financial house in order. The goal should be to take care of business up front (automated savings) and be able to spend on anything you want with the rest.

Regardless, focusing on the big picture details – housing, transportation, careers – is much more important for those looking to save real money than cutting back in minor areas. Finding ways to save money on things like lattes is easy. Prioritizing on the large expenses that actually allow you to save is the hard part.

Sources:
Most Americans want to save more in 2015 – but can they? (Yahoo Finance)
Happy Money: The Science of Happier Spending
Why Americans are loading up on cars again—and paying more (Washington Post)