Last week I looked at some of the options available to bond investors in a low rate world. I showed that subsequent returns over the next decade tend to track the current interest rate level very closely. Here’s that graph again from the Wall Street Journal: 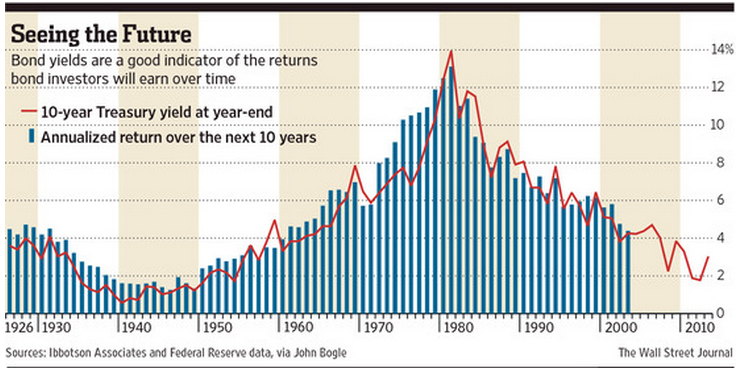 If only it were that easy. Thinking in 10 year increments isn’t something most investors can handle. One of my astute readers, named Jim, wondered how far out of whack the returns can get over any one year period from this long-term trendline. So if the current interest rate is very predictive of future performance, what happens when rates move or investor expectations trump this long-term reality? Here’s a graph that Jim sent me: 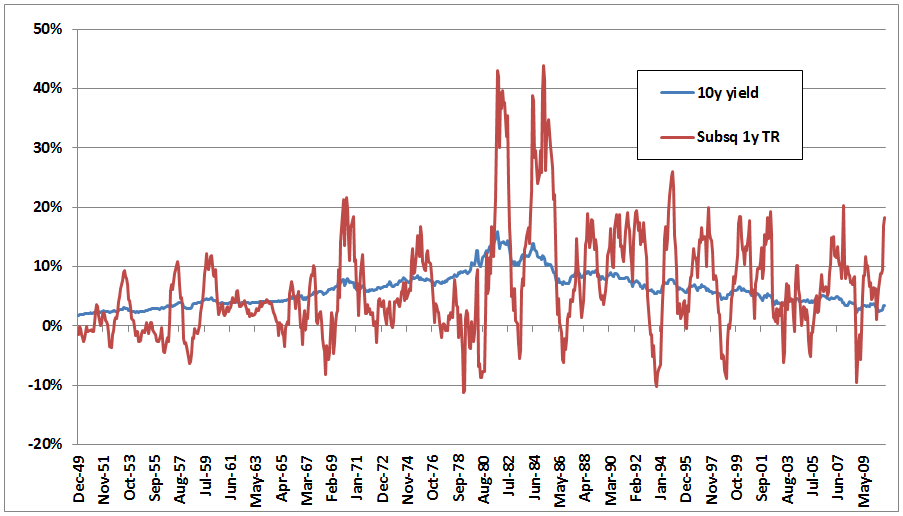 The blue line shows the same 10 year treasury yield from the WSJ chart, while the red line shows the subsequent one year total return on the 10 year bond. You can see how wild the fluctuations are. A couple of times in the 1980s the one year return was over 40%. This is pretty massive volatility for bonds, although the one year loss seems to have a floor at around 10%.

Holding individual bonds is often looked at as being superior to bond funds because you can simply hold an individual bond until maturity. In theory, you can ignore the price fluctuations if this is your strategy, but it still introduces temptation to make an unwarranted move.

I was talking with a retiree earlier this year who was worried about interest rates rising in the future. He set up a bond ladder by staggering the maturity of his bond holdings. For the uninitiated, a bond ladder is a way to spread out interest rate risk by buying bonds that mature at different times. As holdings mature and the principal amount is paid back, you reinvest the proceeds in a new bond at the prevailing interest rates. This keeps the portfolio balanced across the desired maturity profile and allows investors to take advantage of higher rates, should they ever materialize. l think a bond ladder is a great way to manage risk in a highly uncertain interest rate environment.

This gentleman set everything up so it would more or less run on auto-pilot, which is another good idea to keep emotions out of the equation. But once everything was in place, the markets tried to lure him out of his process as interest rates fell and the value of his bonds went up. Although this guy had painstakingly set up a bond ladder to take himself out of the equation, the market was tempting him with higher prices.

He wanted to know what he should do. He was considering selling the bonds to lock in the gains, but then he would still have to reinvest his proceeds at the now lower interest rates.

I didn’t have an answer for him but I did come back with a couple of questions — Why set up such an intricate bond ladder in the first place if you’re not going to follow it? Maybe it would be a good decision to sell your bonds, maybe not, but wasn’t the entire point of the bond ladder to take away the guessing game of what’s going to happen with interest rates?

This is the problem with the markets. They are constantly tempting us. It’s like they want us to behave badly so the market gods can laugh in our faces. Setting up a systematic process or portfolio is easy. Following that process is the real challenge because the markets never make it easy on you.