Generally, investing in different factors will give you a diversification benefit because certain styles tend to perform differently depending on where we are in the market or economic cycle. As with most investing rules of thumb, you can usually only bank on this relationship working out most of the time, not always.

The large cap fund returns are almost identical for value and growth stocks while small cap growth is only slightly outpacing the small cap value. The similarity between the two different styles is pretty remarkable when you consider all of the ups and downs we’ve experiences in that time.

You can get an even better sense of how close these returns are by looking at a chart that shows the growth of $10,000 starting in 2003. Here are the large cap funds, which have shown little-to-no variation over the past few years:

On the small cap side, the slight outperformance by growth over value really started at the bottom of the market in 2009, but still isn’t very pronounced over the entire window:

Interestingly enough, both large cap value and growth have outperformed the S&P 500, which is up 9% a year since 2003. But the Vanguard Small Cap Index Fund has slightly outpaced both small cap value and small cap growth.

Value stocks have outperformed growth stocks historically by a fairly wide margin over the long-term, but the relationship is very cyclical. Here are the Wilshire Large Cap Growth and Value Indexes going back to 1979.  You can see the how pronounced the cycles became in the late-1990s and the early 2000s as each style took its turn with outperformance: 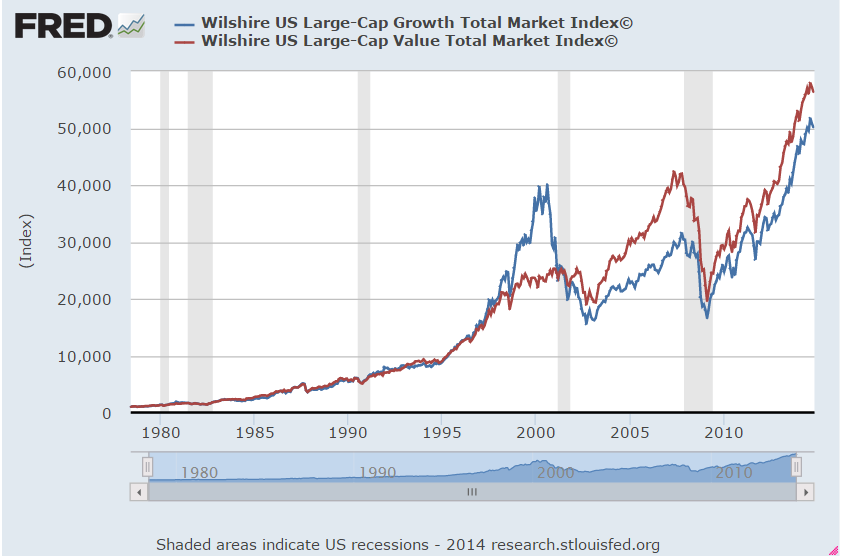 And the Wilshire Small Cap Growth and Value Indexes show their own cycles of over- and underperformance, although small cap value has been the obvious winner by a long-shot: 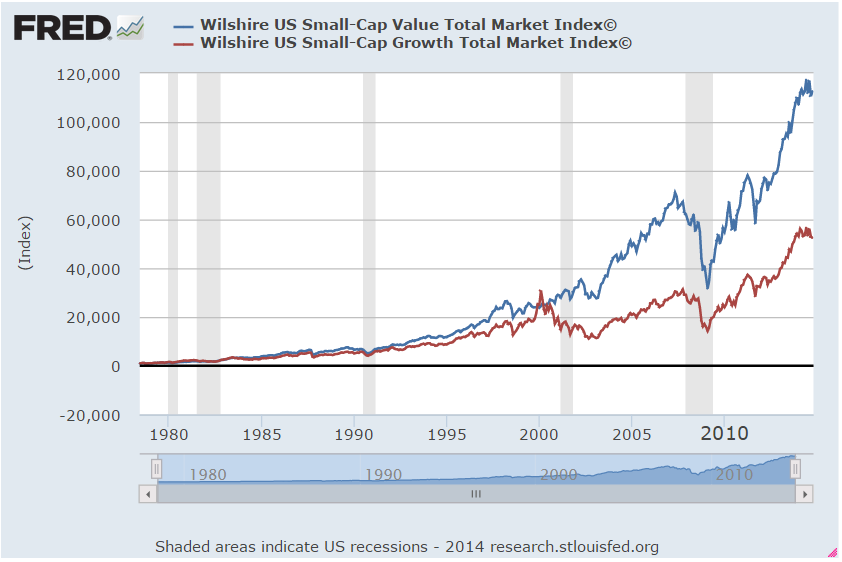 Still, I found it interesting how closely these two different styles have tracked each other over the past ten plus years, considering their historical relationships. A bull market, followed by a huge crash, followed by another huge bull market has definitely led to higher correlations.

In 2014, large cap growth is up 8.2%, outperforming large cap value which is up 7.3%. Small cap growth stocks have been one of the biggest underperformers this year, with the Vanguard fund down -1.7% while the small cap value fund is up 3.6% on the year.

It will be interesting to see if either style is able to show any clear leadership in performance going forward. Everyone says the easy money has been made (although I don’t think it’s been as easy as some would have you believe). If that’s the case, maybe we’ll start to see some variation between value and growth in the coming years.