With the wild swings in the markets lately, it makes sense that investors are getting nervous. But it becomes a larger issue when you start to take the market’s moves personally. Personalizing gains and losses is one of the worst places to find yourself as an investor.

The past month or so has given both bullish and bearish investors ample time to feel both good and bad about themselves as we took the elevator down and then back up again: 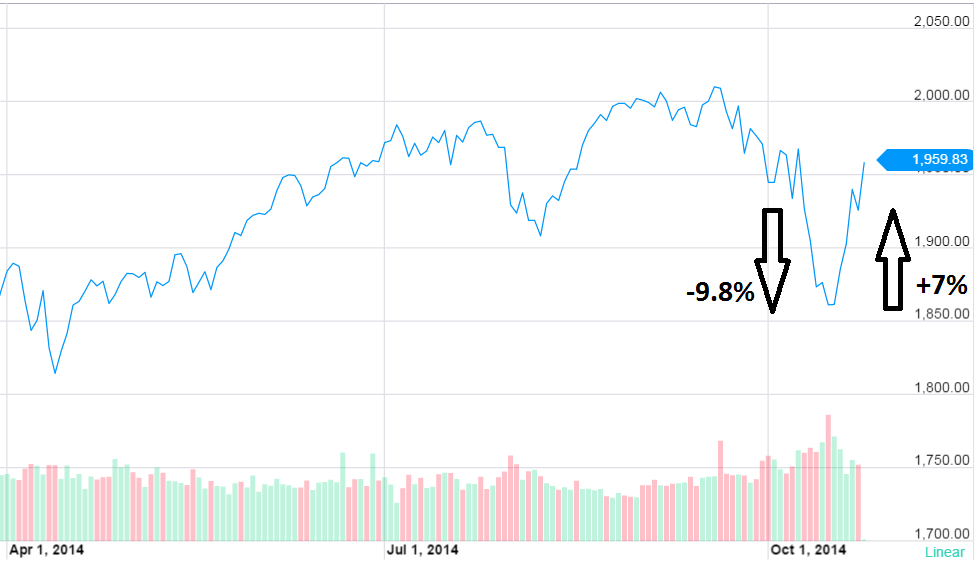 The problem with trying to be right about these types of moves is that really you’re banking on the market bailing out your opinion. There’s no way you’re going to be making level-headed decisions if you personalize every gain or loss.

When you personalize the market, you fall into the trap of trying to be right rather than trying to make money. And the more you try to be right, the less you rely on a systematic process. Instead it turns into a guessing game about short-term market moves. This is not investing, but gambling.

There was once a study performed at a horse racing track where they asked the bettors how confident they were that their horse would win the race. They asked both before and after the bets were placed. The researched discovered that people were much more confident in their horse after they placed the bet than they were before the money was laid down. For some reason, we are obsessed with keeping up appearances to show we’re consistent with the choices we’ve made. Somehow this helps justify the decision, even when there’s nothing we can do about it after the fact.

To relieve these feelings, investors tend to take more risk when stocks are rising but less when they’re falling. Or they dig in and try to never admit when a mistake was made. In a way, these are tactics that offer a false sense of security.

Remember, there’s a difference between losing money and being wrong. Just because you lose money does not mean you made a wrong decision, as long as you stayed true to your investment discipline. And just because the market works in your favor, doesn’t mean you made a good decision. In fact, being rewarded from making a poor decision is one of the worst things that can happen to an investor, because you think it can happen again.

Over time luck eventually runs out if you’re planning on the market agreeing with your investment stance every time you make a buy or sell decision. Learning how to lose money is actually much more important than learning how to make money. If you’re able to accept a loss that was out of your control, that’s a great first step in becoming a better investor.

It’s something that’s going to happen again and again over time so you just have to get used to it. If you have a disciplined process that you follow and the market goes against you, you can’t be mad. This just happens sometimes.

Making a decision off the cuff, outside of your plan, is where the wheels can start to fall off. Because then you start to feel either invincible or angry, depending on how it works out. If you somehow time a move perfectly by using your intuition, then there’s a good chance hubris sets in. And when your gut instinct is wrong, that’s when you start to lash out at the market and get angry. You begin to take credit when you’re right, but blame the market when you’re wrong. This is not the emotional state you want to find yourself in when managing money.

It comes down to the old adage of process over outcomes, but it’s also about focusing on what you can control, which doesn’t include which way the market is going. You should never take it personally when the market goes against you. A solid process should prevail over time, even if it means be wrong every once and a while. This changes decisions from being correct or incorrect to good or bad, an important distinction.

I found plenty of good reading material this week: