The prevailing wisdom on real estate investment trusts (REITs) is that they’ll be doomed once interest rates start to rise. Because of the way REITs are structured for tax purposes they have to pay out at least 90% of their taxable income in the form of dividends.

The thinking goes that higher interest rates will provide competition against the yields on REITs, making them less attractive. I’m never one to take rules of thumb at face value so let’s see how this theory worked in past rising rate environments.

The Wilshire REIT Index goes all the way back to 1979. Here’s how this index performed during prior rising interest rates environments: 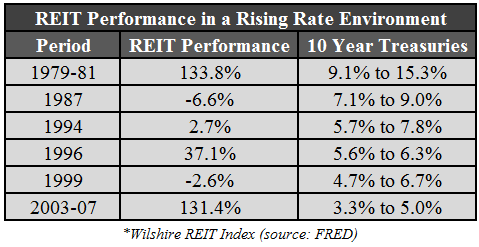 In four out of the six periods where rates went substantially higher, REITs were actually positive. And in three out of the four positive time frames, they showed outstanding performance.

If REITs were sensitive to interest rate moves, you would also expect them to be highly correlated with bonds. This hasn’t been the case. From 1979 to mid-2014, the correlation between the Wilshire REIT Index and the Barclays Capital Aggregate Bond Index was 0.02, signifying no relationship in price movements in that time.

As I’ve pointed out before, these relationships are never static over the years as the market environment is constantly evolving so it makes sense to look at the change in correlations over time. Here’s the rolling 5-year correlation between REITs and bonds from the inception of the Wilshire Index: 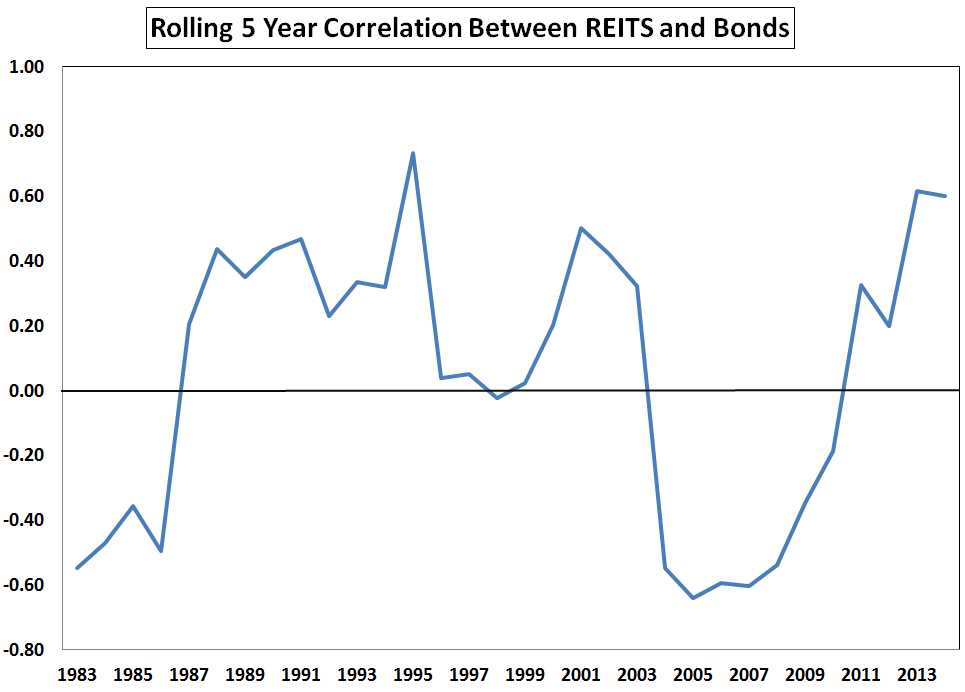 There are times when the two asset classes moved together in the past but there’s not much of a discernible pattern here. REITs are actually more strongly correlated with stocks. The S&P 500 has a correlation coefficient of 0.40 with REITs over the same time frame. But that relationship changes as well: 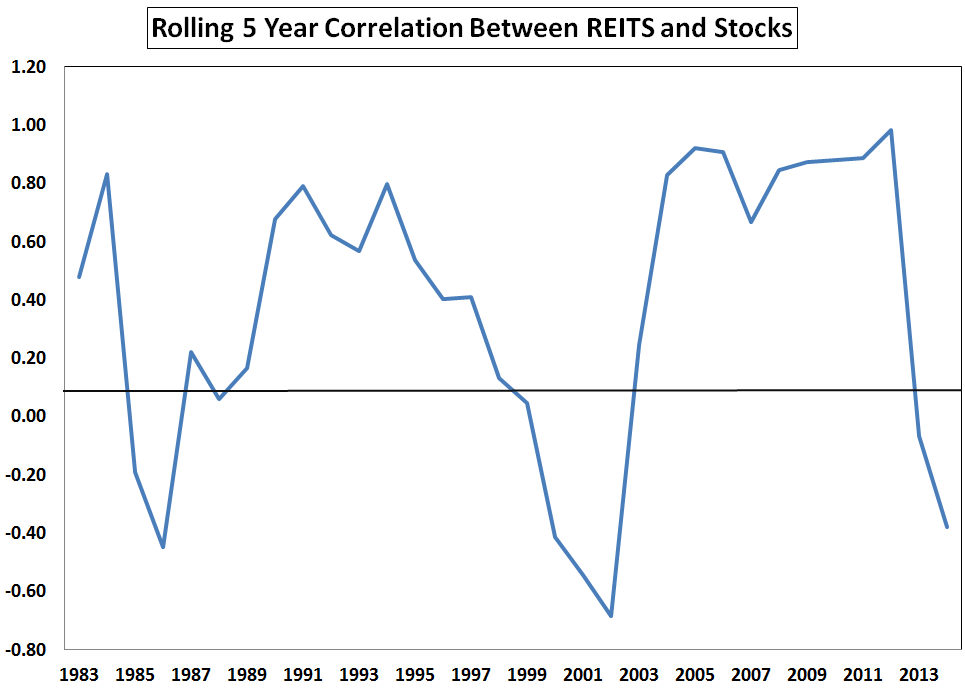 These changing relationships between asset classes can make it difficult for investors, but for a diversified portfolio, this is actually the kind of behavior you would like to see. For inclusion in a portfolio, a long-term investment should generally have an expected return above inflation and not move in lockstep with the other asset classes selected.

It would be a mistake to compare REITs and bonds simply because they’re both income-producing assets. REITs are much closer to stocks in terms of the risk-return profile. Here are the largest annual losses for the Wilshire Index: -39.2%, -23.4%, -17.6%, -17.0% and -6.6%. Interestingly enough, REITs have outperformed stocks and bonds since 1979:

There are a few caveats that apply here. There weren’t many REIT funds available during most of this performance history. Vanguard’s REIT fund wasn’t available until 1997.

Plus, the total market value of the REIT sector is fairly small compared to the entire stock market. While the total value of the commercial real estate market is roughly the same size as the U.S. stock market, it’s not easy to invest in the all of these properties. As of 2013, there were only about 200 REITs available to trade at a market value of over $700 billion.  But REITs actually make up about 2% of the S&P 500 so most investors probably have some exposure to them already.

REITs are up almost 15% this year so it’s possible they could be sold as investors look elsewhere for gains. There’s no guarantee that REITs will perform poorly if rates ever do have a sustained rise. It’s also likely that inflation will pick up as well, which would allow the management companies of the REITs to increase the rents on tenants. Even though the historical record during rising rate environments looks promising, investor preferences going forward are the only thing that matters, as always.