It’s not simply the news or the data itself that makes things interesting when following the markets, but the discussion and reaction that they bring about from investors. Interpretation and perception become the most important element, especially since information is so easy to come by these days.

Two stories caught my attentions last week and both generated a fair bit of discussion among the finance crowd. First up, the following chart from Urban Carmel shows stocks as a percentage of household assets: 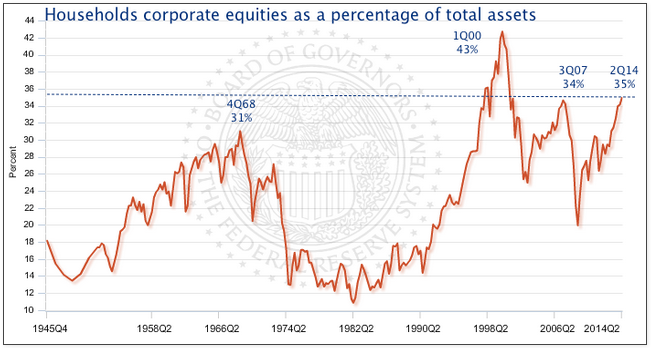 By this measure stock holdings are higher than they’ve been since 2000 before the bursting of the tech bubble and just north of the 2007 peak.

The second one came from the Wall Street Journal and covered Vanguard’s continued dominance with a new milestone in assets:

Average investors are constantly given some form of the following advice:

Now, if you look at the chart above and Vanguard’s $3 trillion in assets, it would appear that there are some people that have been listening to this advice.

Not so fast. There are some that are sounding the alarm based on these numbers. The fact that stock holdings by households are close to another peak has people worried about froth in the markets or another bubble since there may not be too many more investors willing to keep buying. And Vanguard’s $3 trillion in assets makes some believe that far too many investors are becoming passive simply because we’re in the midst of a five year bull market. It’s easy to be a long-term investor when everything is rising.

This is why financial advice can be so maddeningly confusing. First, people are told they don’t follow basic investment advice. Then when many do pick up the basics they’re told it can lead to imbalances. Damned if you do, damned if you don’t.

Why does it have to be this way?

Jim O’Shaughnessy gave as good of an answer as I could come up with in a piece last week:

Herein lays the key to why basing investment decisions on long-term results is vital: the price of a stock is still determined by people.

Especially when money is involved, people exhibit crazy, irrational behavior even if they know better. We can’t help ourselves. Not only do you have to keep your own behavior under control, but you have to at the very least be aware of the irrationality of others.

Focus on what you can control is some of the best financial advice you will ever receive. But you have to pay attention to the irrationality of others and how it could impact the markets. Investors will always make mistakes. Not everyone can win at the game of investing. Imbalances can grow from even rational behavior as stability can lead to instability when investors relax their risk controls.

Investors are notorious for underestimating their tolerance for risk in both bull and bear markets. Many investors will make terrible portfolio decisions the next time something goes wrong. That’s just the way it has to be.

Even if you act as rational as possible, the number of market participants that can completely overwhelm your rationality is immense. Although there’s nothing you can personally do to control other’s actions, it makes sense to understand how the crowd thinks. An awareness of the crowd can help investors avoid following the herd by making the wrong move at the wrong time.

I don’t know if or when Vanguard’s size or the amount of household equity ownership will lead to unsustainable imbalances. No one does. Markets fall for any number of reasons. But knowing that imbalances can happen allows us to prepare for a wide range of possibilities.

Sources:
It’s not different this time (What Works on Wall Street)
Why late 90s euphoria is not coming back (Fat Pitch)