“Investors are always fighting the last war, when in fact all crises are different.” – Harry Markowitz

People have a hard time understanding risk. We only seem to worry about something after it happens instead of preparing for inevitable problems ahead of time. This comes from last week’s Wall Street Journal after the earthquake in California:

One of the most predictable aftereffects of a hurricane or earthquake, such as the weekend’s California earthquake, is a spike in interest by homeowners in getting, or improving, their existing insurance coverage.

And there is a lot of room for improvement in California, when it comes to earthquake insurance. The costliest earthquakes in the U.S. have occurred in the state. But just 10% to 11% of California homes with homeowners insurance have earthquake coverage, which must be obtained on top of the standard homeowners policy, according to the California Earthquake Authority, a state-managed earthquake insurer.

This is not only predictable with natural disasters but with investors as well.

People understand that there are risks out there, but until those risks are attached to consequences it’s out of sight, out of mind. In the same way that homeowners in California rush to buy earthquake insurance after it occurs, investors are constantly fighting the last war by making decisions based on what they wish they would have done in the past to protect their portfolio.

According to the Investment Company Institute, since the beginning of 2009 investors have added $1 trillion to bond mutual funds while pulling out a net $100 billion from equity funds. You can see the huge spike in bond inflows starting in 2009 (and 2002 as well) right as the stock market was bottoming: 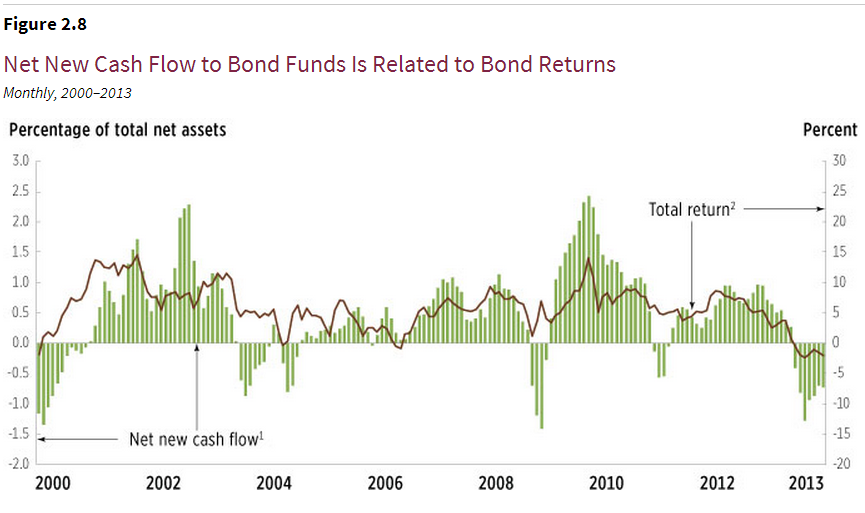 Bonds feel safer to investors after a crash while stocks feel riskier. We are thrilled when every other purchase we make in life goes on sale, but not so with our investments. We want to buy more stocks after they’ve risen and more bonds after stocks have fallen.

The stock market actually becomes less risky as prices fall and more risky as they rise, but this is completely counter-intuitive to our emotional state during times of stress or excitement.

It makes perfect sense to alter your level of risk taking once you have a firm grasp on what you can and can’t take as far as losses go. But it’s a huge mistake to take down risk after a crash only to ramp it back up again once the market recovers. As Carl Richards puts it: greed/buy…fear/sell…repeat until broke.

Everyone realized all of the sudden after 2007-09 that they needed downside protection. Yet the time for insurance policies is when things are going great, not after things have already fallen apart.

Source:
Insurance Coverage Likely to Get More Respect After the California Earthquake (WSJ)