“At any given moment, what the market is doing reflects how we’re feeling right NOW. Not how we’ll feel tomorrow and most likely not how we’ll feel in a month, let alone a year. Short-term market behavior is rarely about anything other than an interpretation of what we THINK is happening or will happen as opposed to what we KNOW.” – Carl Richards

One of my rules of thumb for investor behavior is that as the volatility of an investment increases, so too does the activity in and out of that investment.  When there are wide swings in price, the temptation to make changes and short-term moves simply overwhelms an investor’s time horizon.  Everyone gets the feeling that they can guess which way things will go next when there is the possibility for big moves.

Here’s a look at the 10 and 15 year annual return numbers for various bond fund maturities (20+ years, 5-10 years and 1-5 years) broken out into investor and investment returns along with the performance difference: 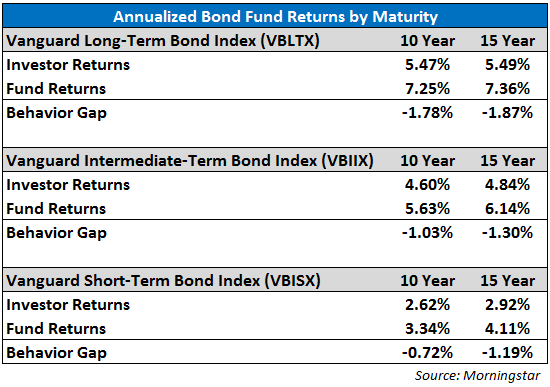 For bonds, the longer the maturity, the higher the volatility, all else equal.  Therefore, long-term bonds have the highest volatility (along with the highest interest rates). Generally, that means higher risk with the expectation of higher returns.

You can see that as the maturity of these funds increases (along with the importance of interest rate movements) so too does the behavior gap.  Long-term bonds have had better returns, but also worse behavior by investors.  The gap is still not great for intermediate and short-term bonds, but it is an improvement.

My theory is that the more stable, shorter-term bonds don’t get nearly as much action from investors that try to time the movements of interest rates (and thus bond prices — remember, bonds and rates have an inverse relationship) because there isn’t nearly as much bang for your buck in those maturities.

It would seem that forecasting interest rates should be easy.  The textbook rules for why interest rates rise and fall are fairly straight forward.  Unfortunately, theory doesn’t always translate so neatly into practice in the financial markets.

Interest rates change for a number of reasons including, but not limited to, the following:

Remember how many people thought rates could go no lower after spreads hit historic lows in 2007?  Or how many investors predicted much higher inflation and rates following the bank bailouts and government stimulus?  Or even the beginning of 2014 when the “easy” move was higher rates?

There will always be a seemingly no-brainer move for interest rates.  Rarely does the market cooperate and do what everyone thinks should happen.  Yes, rates will eventually rise.  But chances are you don’t have the ability to nail the timing and magnitude of that move by shifting in and out of different maturity bonds.

The majority of investors should probably steer clear of longer-dated bonds anyways.  This is more important now than it was in the past since there will be higher volatility in long-term bonds at lower interest rates because there isn’t the yield cushion there once was.

Try not to confuse your tolerance for volatility.  Most investors should be content to take their volatility in stocks and keep bonds at intermediate-term or less.  That way you avoid unnecessary fluctuations in the part of your portfolio that’s supposed to be used for stability (for both risk management and psychological purposes) and income.

Hopefully that will help close the behavior gap as well.