“Over the years, I’ve become convinced that fluctuations in investor attitudes towards risk contribute more to major market movements than anything else. I don’t expect this to ever change.” – Howard Marks

Small caps have been on everybody’s radar this year because the Russell 2000 experienced a 10% drop.  This is more commonplace than you would think, as Barron’s recently pointed out that 83% of all years have seen at least one double digit loss in small caps dating back to 1990.

Investors generally use small caps as a barometer of risky stocks while the S&P 500 and the Dow Jones Industrial Average are used to gauge the larger, more established companies. The median market cap for companies in the S&P 500 is roughly $68 billion while small cap stocks are usually categorized in the $2-3 billion range.

In-between there is a sweet spot of under-appreciated companies with markets caps of around $8-10 billion.  These mid cap stocks represent an under-rated section of the market that many don’t pay much attention to.

Small caps have huge potential while large caps are the more well-known blue chip stocks.  Mid caps are thus the in-betweeners.  Because they fly under the radar, mid caps have an excellent performance history.

Here’s a performance comparison going back to 1990 between the Russell 2000 and the S&P Mid Cap 400 indices:

The Russell 2000 gets all the pub, but mid cap stocks have crushed the small cap index over the past 24 years with less volatility to boot. But these numbers don’t tell the entire story.

Now we see that the small and mid cap S&P indices both performed much better than the Russell 2000 and with less volatility. I don’t have a statistically significant reason to offer for this discrepancy, but my guess is that it has to do with the size of the companies in each index.

If you’re going to take your risks in small cap stocks you should probably get compensated for those risks with higher returns.  It appears the Russell 2000 doesn’t hold up to this litmus test in comparison.

There are a number of simple ETFs that track the Mid Cap 400 and Small Cap 600. Here are the largest ones by market cap from iShares, State Street and Vanguard:

Of course, now that small and mid cap stocks have both had great runs over the past 5, 10 and 15 years now isn’t the time to pile in just because we’ve witnessed good past performance. That would be a mistake in my opinion.

But I think both have a place in a diversified portfolio for investors with a long enough time horizon and the ability to withstand periodic bouts of volatility or losses. Here’s the graph from Barron’s of the small cap losses since 1990 in the Vanguard Small Cap Index Fund I referred to above: 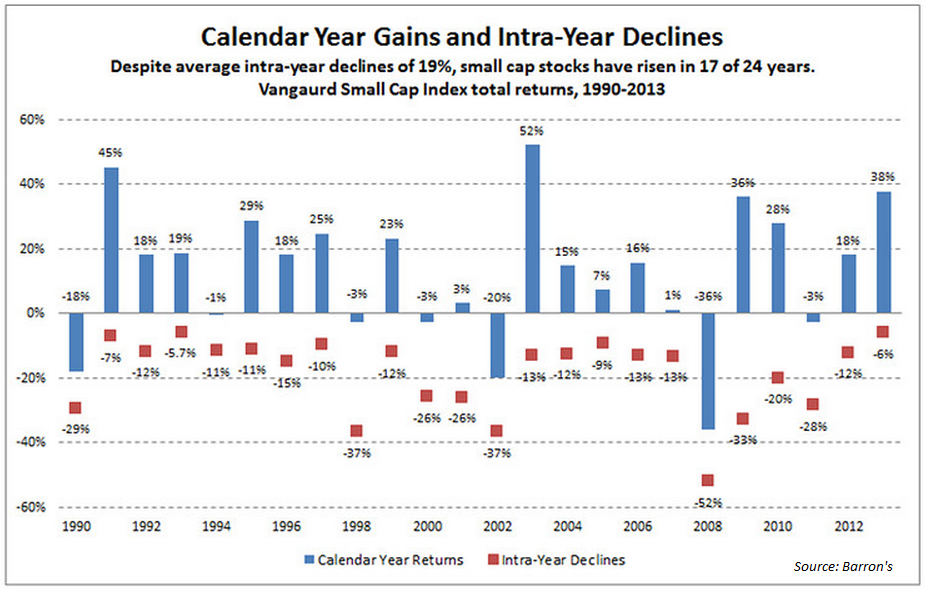 Assuming you don’t have any investments in the space, you could probably do much worse than legging into these asset classes when they have their periodic drops in price like we see here.  Just be aware of the fact that they happen more often than you’d think.

Doing the analysis on these asset classes I came across some interesting performance numbers. So here’s my fun fact of the day (assuming you find historical investment performance “fun” like I do):

From 2004 through the end of April of this year, the Vanguard Mid Cap Fund and the Vanguard Small Cap Fund are each up exactly 164.7% which means that have both returned 9.9% annually for the last decade and change.

Fun facts to bore all of your family and friends with over the long holiday weekend. Enjoy.