This past week I was watching the news and they showed the obligatory story on the $400+ million Powerball lottery.  There were the standard interviews with people buying tickets at gas stations and 7-11. What would you buy with that money? How would you spend your fortune?

At the end of the story they threw in the fact that $35 million has been spent so far on this particular drawing alone with roughly $80 billion spent annually on the lottery in the U.S.  That very same day my Twitter feed was full of stories on the retirement savings crisis in America.

First was an article from the USA Today:

About 36% of workers have less than $1,000 in savings and investments that could be used for retirement. Debt is weighing heavily on many people, with 58% of workers and 44% of retirees saying they have a problem with their level of debt.

Next came this one from a TIAA-CREF retirement study:

More Americans spent less time in the last year planning for an IRA investment for their retirement years than choosing a restaurant, flat screen TV or tablet.

And finally this video from economist Justin Wolfers:

Wolfers is talking about economic policy implications here, but the telling stat from the study he referenced is that 1/3 of all Americans live paycheck to paycheck, but 2/3 of that 1/3 are actually considered wealthy. So there is a 10% group of Americans who are poor and most of that group will always have a hard time saving (unfortunately). But over 20% of all Americans are living paycheck to paycheck even though they are considered “wealthy” by this study because they own houses, cars or boats.

The problem is that the term wealthy is being used in the wrong context here. Wealth is created by saving and investing more than you spend from your income stream. A house, boat or car are not considered an investment in terms of wealth creation because they are things that you consume today. You must pay interest, fees, maintenance costs, taxes and insurance on these personal balance sheet items.

Investing rests on the assumption that you delay current expenditures so that you have money for future expenditures. Cars and boats are depreciating assets that cost you money now.  On average, housing barely keeps up with inflation over the long haul and also costs you money today. I’m not saying you should forego buying a house and a car, because you need them to live your life, but these assets alone don’t help most people build actual wealth.

As Wolfers stated in the video, you can’t spend a house or a car.  Those that have tried to leverage these assets in the past learned the hard way that tapping equity for expenses doesn’t work out so well if that asset happens to fall in value. That’s the problem with low savings rates (currently at 4.5%). If something goes wrong, you are basically out of luck and bound to fall behind and go into debt, a form of negative savings.

The principle of living below your means is something of a lost art.  The most misunderstood yet important concept in personal finance is compound interest. I’m sure you’ve seen similar graphs in the past, but this one from JP Morgan Asset Management (via Business Insider) makes this point clear: 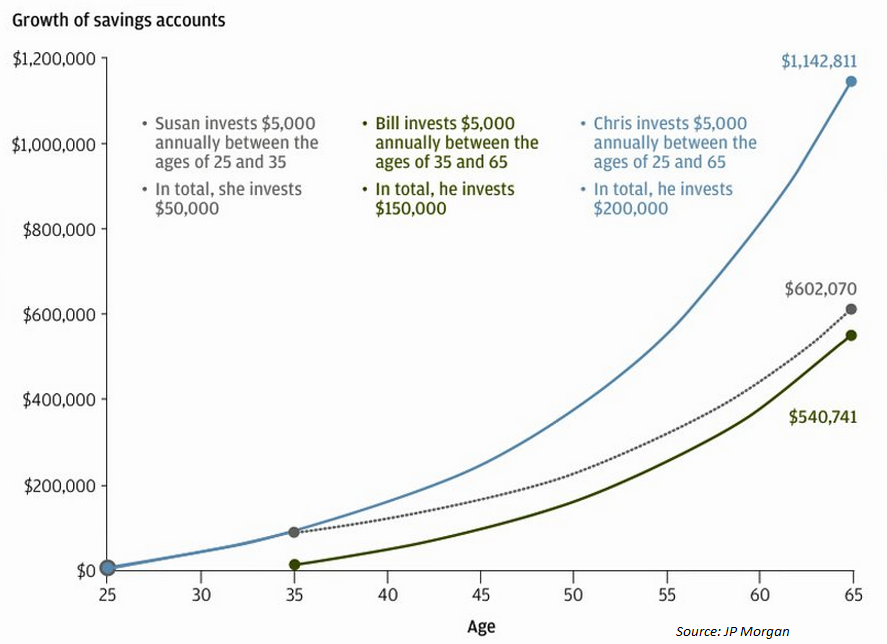 Compound interest and the amount of time you invest make up the differences in ending balances in this example, but all three cases show the possibilities of disciplined, periodic saving over time.  It doesn’t matter how great your investment strategy is if you don’t save money. This crucial first step in the process is often overlooked as we seek the quick fix to riches.

I’m not trying to go on a soapbox diatribe against buying lotto tickets, a nice house or a car here.  By no means am I a minimalist when it comes to spending money.  Spending money on the things that make you happy is very important, but we need to learn to cut back everywhere else to reduce the many issues that financial problems can cause (see Happy Money for the research on this).

Your personal finances can have a large impact on so many areas of your life.  We all generally know we have to save a decent percentage of our income to ease financial pressures, but that doesn’t make it any easier to make the necessary behavioral changes required to make a difference.

I wish we had a system in place that encouraged saving money instead of a singular focus on constant consumption.  Even a better balance between the two would work.  I don’t see this changing anytime soon.  The famous Walter Kelly quote says, “We have met the enemy and he is us.”  No one is going to care about your finances more than you.