“This year I invested in pumpkins. They’ve been going up the whole month of October and I got a feeling they’re going to peak right around January. Then bang! That’s when I’ll cash in.” – Homer Simpson

Here is a look at how the various asset classes and markets performed in 2013 along with the annualized 3 and 5 year return numbers: 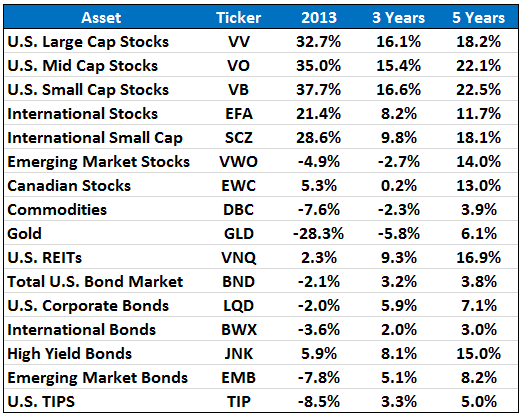 5 Year return numbers for stocks look incredible as of the end of 2013. The financial crisis returns from 2008 fell off this at year end and since then it’s been lights out.

Annual returns of 20% will double your money roughly every 3.6 years. Just don’t expect this type of performance to last forever.

Using the recent past to try to predict where the next top performing investment will come from can be dangerous. Momentum works until it doesn’t.

Fund companies have a habit of pushing their best performing funds or creating new funds that take advantage of the current market cycle to entice investors to buy their products (and pay them fees). Charley Ellis had a nice rant on this subject in a recent interview:

We emphasize past results if they are any good, we sell the dickens out of past performance. . . We overemphasize the performance factors enormously, and we never talk about risk. And then we have an interesting habit: We incubate new funds all the time, we drop the ones that don’t make it, we incubate some more. . . . The major fund management organizations will have 300, 400, even 500 different mutual funds in being. Guess which ones get advertised? If I had 500 children, do you think I would be able to find one that is pretty damned terrific? I think so.

Case in point on using past performance to predict future returns is gold in recent years. Here are the results from a Gallup poll in 2011 that asked what people thought was the best long term investment going forward:

Of course this was after gold ran up from under $300 an ounce in the early 2000s to a peak of just over $1,900 in 2011 (right around the timing of this Gallup survey interestingly enough.

We all know what happened next…gold got slaughtered and stocks continued climb the wall of worry.

COUNTRY PERFORMANCE
Even though stocks continued their dominance in 2013, there are a number of investments that lost money last year. Bonds, commodities and emerging market stocks all finished the year with underwhelming returns, which look even worse on a relative basis compared to U.S. stocks.

Also, the U.S. wasn’t the best performing country even though it gets the most press. And there were certainly countries that had terrible performance in 2013. Here are the 10 best and worst performing stock markets from last year: 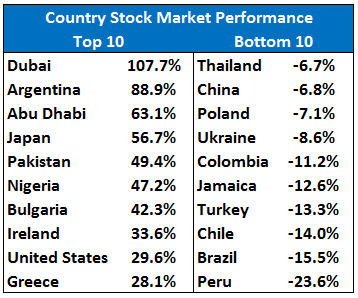 The lagging countries are down for a reason. Stocks don’t sell off because everything’s going great.  But it will be interesting to see how the top 10 and bottom 10 shake out in 2014.

Mean reversion is a powerful force of nature in the financial markets and the worst to first dynamic tends to play out over longer time frames.

It’s easy to invest in markets that are rising but not so comforting putting your money to work when things look bleak.

I don’t pretend to know how things will shake out over the next year or so, but I would be willing to guess that over the next 5 to 7 years the markets that lost big in 2013 will be closer to the top of the leaderboard than the bottom at some point.

Now if I could only time it perfectly I’d be all set.

Further Reading:
Does past performance matter?