One of the prevailing theories on the sad state of affairs of the retirement statistics in this country is that our employers have failed us. The line of thinking goes like this:

Employers used to provide the majority of workers with pension income for retirement as thanks for being a loyal employee.  Since pensions have gone by the wayside and the 401(k) or similar retirement plans have taken over as our retirement savings vehicle, the results have been disastrous.  I yearn for those simpler times.

Is this true? Have our employers abandoned us in favor of ever greater profits at our expense? Have they ruined our retirement funds?

The data would say otherwise.

This table comes from a 2009 Congressional report on retirees (click to enlarge): 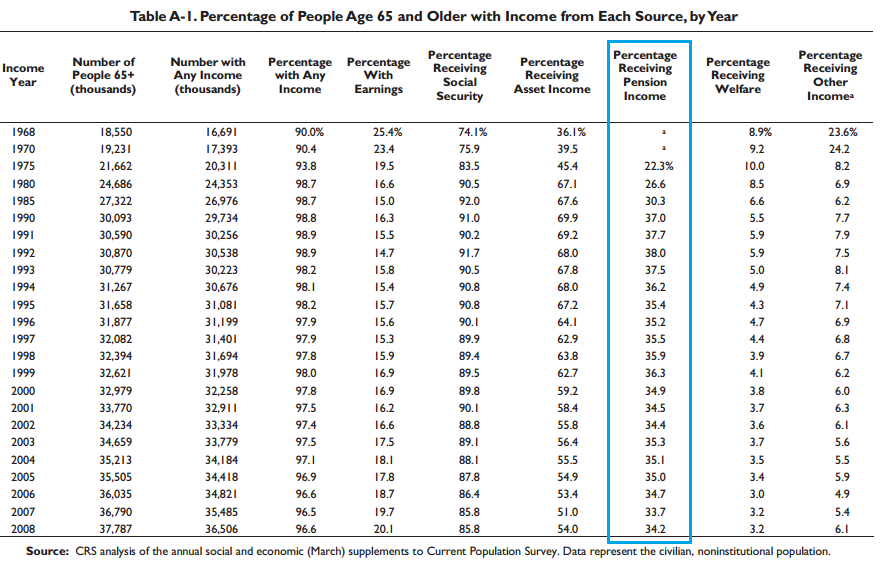 I’ve highlighted the column that shows the percentage of Americans over the age of 65 that receive pension income.

So it’s not like we’re all of the sudden on our own with a 401(k) plan. Nobody pulled the rug out from under us and stranded us on a deserted island. It’s been this way for a long time now.

People read about the lavish pension and healthcare benefits that a small number of government and auto employees have received in the past and think that it must have been like that for everyone at some point.

Turns out it was all a dream. Most people have always been forced to save and invest on their own.

What’s going on here is that people love to blame others for their own problems. The laundry list of culprits usually includes the banks, politicians, their employer, the Fed, the consumer culture, taxes and I could go on.

The one party that never gets blamed is the individual.

John Rekenthaler of Morningstar is never one to hold back his opinion on all things investment and retirement-related. It was a recent column of his that made me aware of these pension figures. Here’s John’s take on those that would like to blame others for our collective retirement crisis:

It should come as no surprise, therefore, that articles about the U.S. “retirement crisis” inevitably focus on the behavior of everybody but the employee. They never wonder why most countries that have lower incomes, higher taxes, a higher cost of living, and a stronger social safety net than the U.S. also have higher average savings rates.

I do. I would love to read a well-researched article about why U.S. savings rates are below those of countries that seemingly should have lower savings rates, rather than higher, than the U.S. It would sure beat reading the 700th version of the American retirement scandal.

Harsh words but they ring true for a large majority of people that have never saved and have only heaped blame on others for the tough spot that they’re in.

If you have a pension, consider yourself lucky. If not, it’s time to give up playing the innocent victim card.  You’re on your own if you wish to reach financial independence.