“If you know how to spend less than you get, you have the philosopher’s stone.” – Benjamin Franklin

The Bureau of Labor Statistics recently released a report that shows how Americans spent their money in 2012.

Here is a pie chart courtesy of The Atlantic with the breakdown: 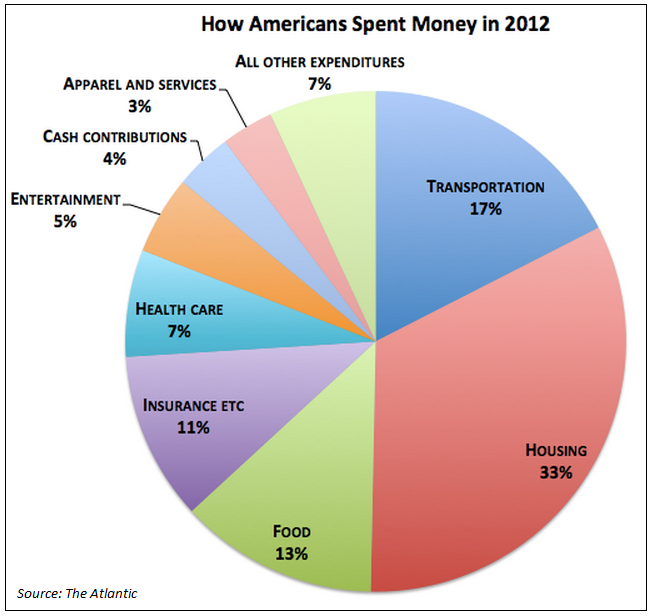 It’s great that the BLS is breaking down the spending habits of consumers into these various categories. This data set obviously contains a wide range of incomes and economic backgrounds, but it’s interesting to see the average spending patterns of the entire country.

However, it’s unfortunate that more people don’t keep track of their own spending in this way. Measuring your spending levels by category and tracking where your money actually goes can be eye-opening, but most people simply choose to avoid doing this simple act.

This just isn’t going to get it done for those that would like to have any shot at even keeping up their same lifestyle while in retirement or some day achieve financial freedom.

There are many reasons that people don’t track their spending habits. For one, it’s just plain boring. No one wants to talk about budgeting when it’s much easier to ignore the topic altogether.

Also, most people simply don’t want to know where their money is going every month. Change is hard, so most of the time it’s just easier to stick with the status quo.

Plus, most people assume they know exactly what they are spending their money on. But if you’re not tracking your spending, the results may surprise you. These surprises are usually unpleasant, so it’s easier to continue to keep a blind eye to our financial reality.

Most people say that you should live within your means.  Actually, if you are ever going to get ahead in life you have to live below your means.  That’s how you build wealth.

Source:
Where Americans-Rich and Poor-Spent Every Dollar in 2012 (The Atlantic)