“We should try to find value among the knowable – industries, companies and securities – rather than base our decisions on what we expect from the less-knowable macro world of economics and broad market performance.” – Howard Marks

Being a decent investor is fairly easy. You invest in low cost, highly diversified index funds, set a reasonable globally-based asset allocation plan, rebalance periodically, think long-term, ignore the noise and try to keep yourself from acting like a fool when the markets move one way or another.

This is a huge distinction for those that try to beat the market on a regular basis. This isn’t something you can just learn overnight either. It takes time, patience, intelligence, hard work and then you still have to be wired correctly to pull it off.

I was reminded of second level thinking recently when I was reviewing the best-performing sectors of 2013 in the S&P 500. Here they are along with the overall market return through October 31: 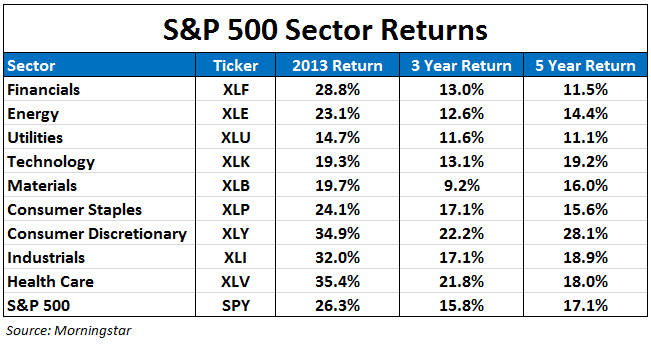 First level thinking suggests that the consumer is still badly wounded from the real estate and debt crisis of 2008. Unemployment is still far too high.

Consumers have no money to spend so the consumer discretionary sector (XLY) must be doing badly. Many so-called ‘experts’ have been claiming we are entering a depression and the only choice you have is to buy gold bars (and they have been wrong all the way up).

Second level thinking looks back historically and sees that even though it can act irrationally from time to time, the stock market can be quite good at discounting problems. This happened in 2007 when XLY was down nearly -14% while SPY was up over 5%.

Consumer stocks had a swift fall before the recession actually hit.

So the economic slowdown and consumer retrenching was already priced into the market and XLY has subsequently outperformed SPY every year since. Housing prices have been on the mend and financial markets have recovered their losses and then some. Consumers are still spending even though they have been deleveraging their debt.

First level thinking also suggests that the uncertainty surrounding Obamacare would severely affect healthcare companies. It will be tough to know who the winners and losers will be once it all shakes out, so it would be best to avoid the sector.

Second level thinking again uses history to see that the healthcare sector (XLV) severely underperformed in 2010, when the Affordable Care Act was first signed by the President, returning just under 3% versus the SPY return of almost 15%.

Second level thinking would have also led you to believe that the demographic shifts in the US would require continued spending in the sector, regardless of the changes in the new insurance program.

File this one away in the investing is counterintuitive folder and beating the market requires you to go against the crowd. This is also further evidence that investors will usually make more money focusing on the fundamentals rather than a false narrative.

I’m sure there were many great investors that missed these sector investment themes.

Use this as an example to figure out if you really have the temperament to be a second-level thinker and a great investor. There aren’t many that are. If not, the long-term results you can gain from becoming a decent investor are pretty good too.

Just don’t get caught up trying to be a second-level thinker on the side.  Being a decent investor is much less stressful and it doesn’t have to be a full time job.

Now here’s the best stuff I’ve been reading this week: