“Why does this matter to me so much? Isn’t it fundamentally stupid that this matters so much?” – Bill Simmons on being a sports fan

I’ve spent a lot of time learning, thinking and writing about the inherent behavioral biases that we humans all seem to share.

The greatest investors of all-time don’t do things exactly the same, but they all share the ability to detach their emotions from their decisions and control their behavior during the extremes.

It fascinates me how human nature can continually cause cycles of booms and busts.

The cognitive biases have always been a part of the markets and they will always be a part of them. We just can’t help ourselves so manias and panics are part of doing business.

I thought about this last weekend as I was watching my beloved Michigan Wolverines lose a college football game to Penn State in quadruple overtime.

For some reason, this graph that explains the emotions of investors at various points in the market cycle kept popping into my head as I watched the game: 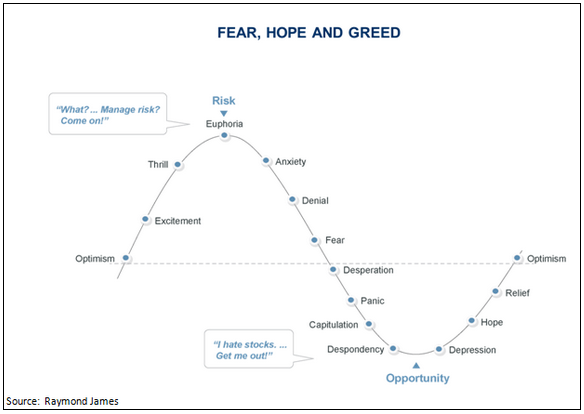 As Michigan went from losing in the first half to taking a 10 point lead in the second half to giving up a last minute touchdown to blowing several opportunities to win the game in OT to finally losing the game in the fourth overtime I could feel myself going through this same roller coaster ride that investors in the markets go through at the various stages.

I hit every dot on the chart at one point in the game and many of them more than once. I gave up in the first half and said I was done with them this year (I hate stocks…Get me out!). I believe it was at this point that my wife politely asked me to finish the game in the basement by myself.

When they took over in the second half I was back on board (What?…Manage risk? Come on!).

The ups and downs continued until Penn State scored in the final overtime and won the game after U of M blew several chances to put the game away and I ended up stuck in the depression stage.

My take away from stepping back and looking at my own actions as a college football fan is that it is very difficult to control your emotions when you really care about something.

That’s why it’s so difficult to keep your emotions out of financial decisions. In one way or another, we all really care about money or at least what it can do for us.

This causes people to make irrational decisions by spending more than they can afford, running up credit card debt and letting fear and greed guide investment choices.

While I’m a lost cause when it comes to controlling myself when watching my favorite teams play, there are some things you can do to keep yourself grounded with your money.

The first step is acknowledging that human nature plays a role in your decision making process. This is why I don’t gamble on sporting events. It’s way too hard to think and act rationally when picking the winners and losers when you can’t detach yourself from the teams on the field of play.

Here are some other ways you can take your behavioral biases out of your investments or at least minimize their impact:

1. Automate good behavior. Use technology to keep bad behavior in check.
2. Make your financial plan rules-based to focus on process and your system instead of outcomes.
3. Learn or understand the history of market and economic cycles. Cycles are one of the few constants in the financial markets.
4. Focus on what you can control.
5. Avoid forecasting and making decisions based on market & economic predictions.
6. Measurement helps performance so track your progress.
7. Think long-term. Keep an optimistic bias but also be realistic about short-term risks.
8. Ignore the noise from the media. They have to fill air time, but you aren’t forced to watch.

Sometimes I wish I could automate my fan experience, but the ups and downs are part of the reason why we love sports so much. Although, sometimes I do think to myself: Why do I care so much?

Just remember to save your emotions for your favorite team(s) and try to stay cool, calm and collected when dealing with your finances.

It’s stressful enough when you have to watch your favorite team lose, even though it has no impact on the rest of your life whatsoever. Financial decisions, on the other hand, can play a huge role in your life and overall happiness.

Source:
The six stages of bull markets – and where we are right now (Minyanville)