I’ve been wrong a lot in my life.

I was wrong to think Joey Harrington and Charles Rogers were going to be the saviors for the Detroit Lions.

I was wrong when I let my brother drive my 1989 Honda Accord from Michigan to Martha’s Vineyard  to visit friends when I was in high school (it broke down immediately when he brought it back).

I was wrong to stock up on boot-cut jeans right before the slim look was about to come into fashion.

And I was wrong on this blog last year when I wrote why interest rates need to stay low for a very long time.

This was my thinking at the time:

I don’t see how the Fed or Treasury could allow interest rates to get back to 4-5% again at the current levels of debt and spending. I guess it’s possible the government would simply spend even more money but that would be a tough sell if inflation does remain elevated for some time.

Inflation may be even harder to predict than the path of interest rates so we’re in a wait-and-see economic environment but I wouldn’t be shocked if interest rates stayed relatively low for many years.

In that post I referenced a stat from Barron’s that said a 3% jump in government borrowing costs would send the debt service expense from a little more than $300 billion to nearly $1 trillion.1

That’s more money than we spend on defense and nearly as much as we spend on Social Security. 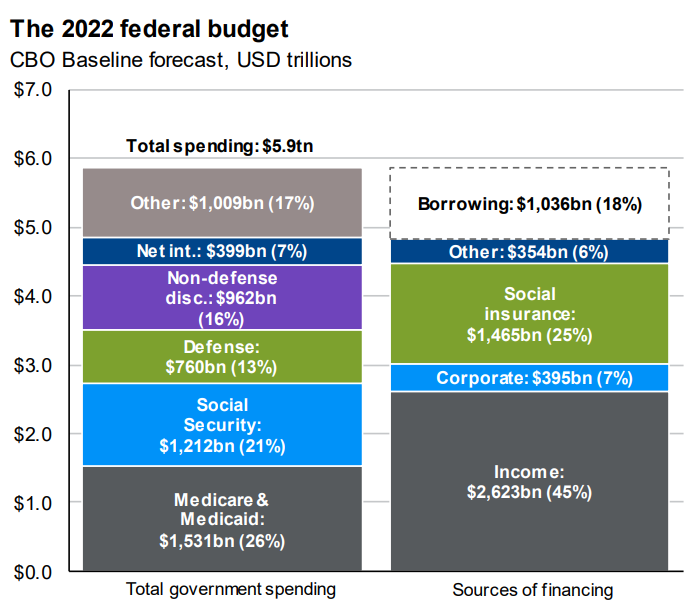 I assumed interest rates would have to stay low to allow the government to continue taking on our enormous debt load, especially with the trillions we added during the pandemic.

To be fair, I did give myself an out here by concluding the piece with this:

Barring a situation in which inflation gets out of control, I don’t see how they can allow rates to go much higher than 3% or so in the coming years.

However, I didn’t exactly predict 9% inflation or the ginormous amount of backlash it would receive.

In the information age it feels like we can collectively only care about one big problem at a time. That problem right now, economically speaking, is inflation.

However, if interest rates stay elevated for some time people are eventually going to take notice.

Federal debt as a percentage of GDP is already forecast to hit new all-time highs in the coming years. 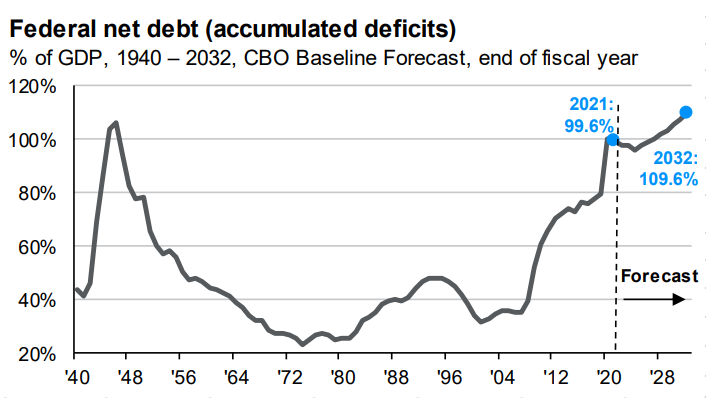 My guess would be this baseline forecast does not include government borrowing costs in the 4-5% range.

A new report from The Committee for a Responsible Federal Budget estimates the most recent rate hike by the Fed will add $2.1 trillion to the government deficit over the next decade. And that’s just the most recent 0.75% raise. So that $2.1 trillion is on top of the hikes we’ve already seen this year and any further rate hikes to come.

Short-term government borrowing is already around 4% across the maturity spectrum. If the Fed tries to get short-term rates in the 4-5% range to stamp out inflation, it’s certainly possible those rates will go higher.

Maybe inflation eating into the debt offsets this somewhat but at what point do the politicians begin worrying about how much federal spending is going towards interest expenses?

At what point do citizens become concerned that other services will be harmed because so much money is being paid to service our debt?

Will higher interest rates make it politically unviable to invest in things like our infrastructure?

Am I doubling down on my wrong take here?

A Martingale strategy is when you keep upping your bet after losing to try to make your money back. I had a friend who used to do this at the blackjack table, simply doubling his bet every time he lost.1

Should I double down here?

Maybe this is just a short-term burst in rates that comes back down once we tame inflation. Maybe the pressure point on the government will change from inflation to debt.

It does feel like there are still a lot of long-term factors in place that should keep a lid on interest rates — demographics, the number of retirees seeking income, technological progress, etc.

If that happens the interest expense could become the next hot-button political talking point.

Michael and I talked about the impact of the Fed’s rate hikes and more on this week’s Animal Spirits:

Further Reading:
Do We Need to Worry About Government Debt?

1The problem with this strategy is, of course, eventually you can run out of money. It rarely worked out for him after multiple trips to the ATM.