Hey guys please explain why an inflation-linked bond could have lost money this year with inflation at 9%.

I’ve been getting this question a lot lately.

How could bonds that have an implicit inflation kicker be down almost 7% this year? 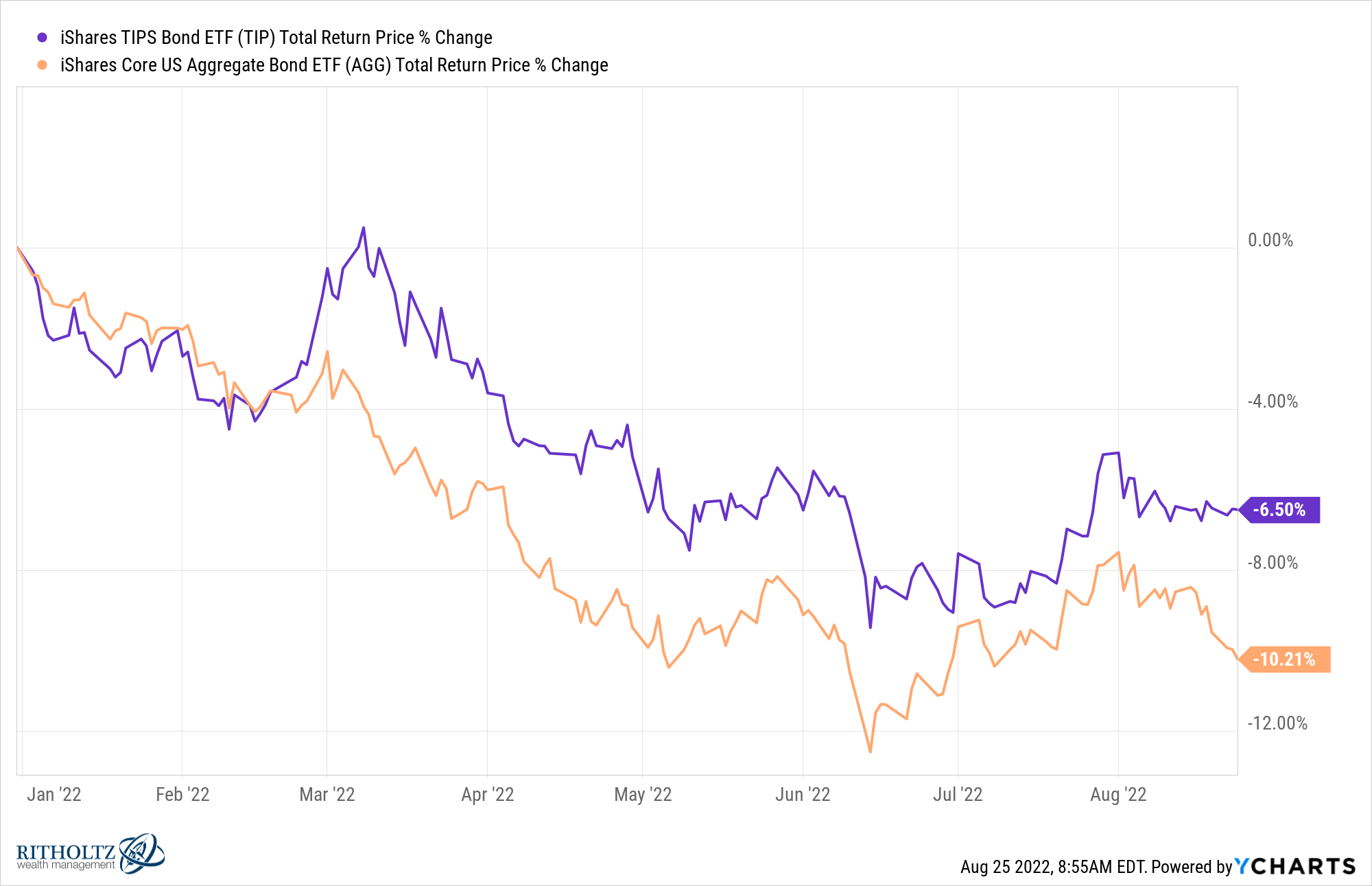 Treasury inflation-protected securities (TIPS) are one of the most peculiar assets in the investment universe.

They’re relatively new and have some unique characteristics when it comes to bonds. They’ve been around in the UK since the 1980s but the U.S. government didn’t start offering them until the late-1990s.

But investors don’t get the inflation-adjusted principal value until maturity.1 The economy can be all over the place in the meantime which means inflation, deflation, rising rates, falling rates and everything in-between.

So while the inflation protection built into these bonds is one of a kind, TIPS can be volatile along the way.

For example, the biggest inflation-protected bond fund is the iShares TIPS Bonds ETF (TIP). This fund lost nearly 15% in the fall of 2008: 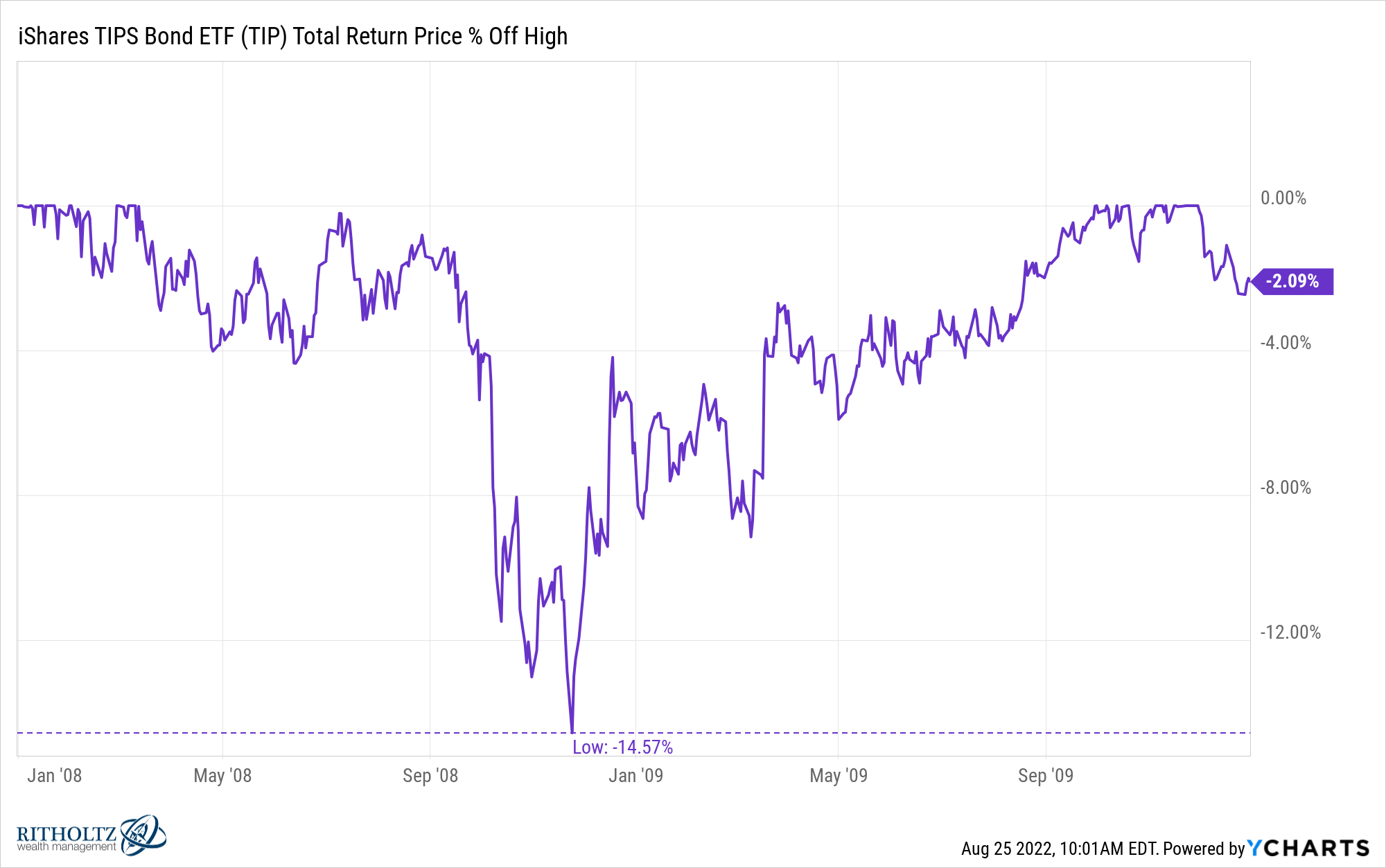 Part of this had to deal with the deflationary nature of the Great Financial Crisis, but Lehman Brothers had also used TIPS as collateral for some of their loans and became forced sellers of these bonds.

There are no systemic reasons for TIPS selling off this year though. The problem in 2022 is TIPS are acting more like a bond than an inflation hedge.

You can see in 2021, TIPS outperformed the aggregate bond market by a wide margin: 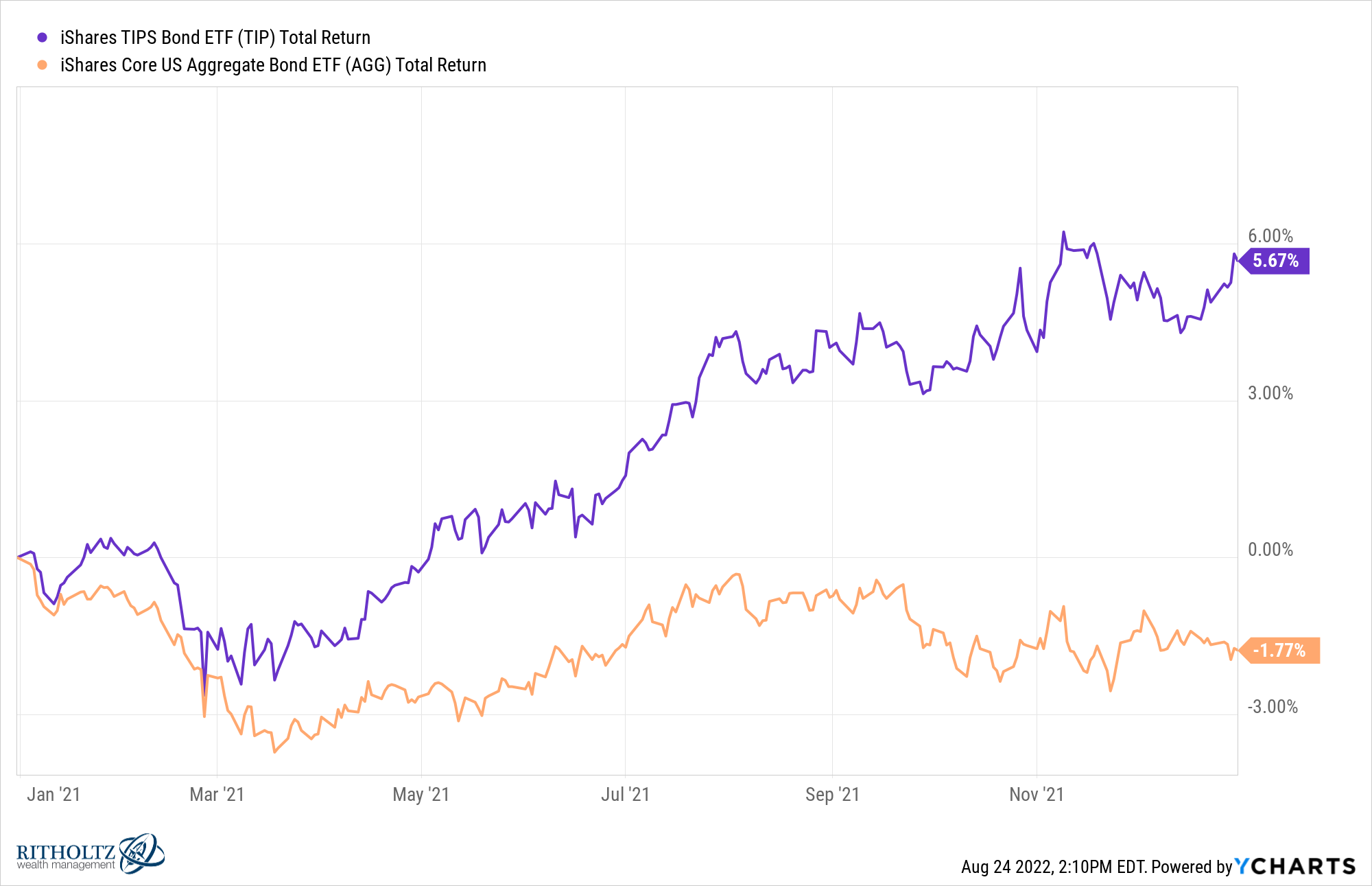 That made sense given inflation came in much higher than most expected.

I’m sure most investors assumed a similar pattern would repeat this year but instead TIPS are down just like regular old bonds.

There are a couple of reasons for this confusing performance.

Investors began pricing higher inflation into these bonds so the outperformance has narrowed this year substantially.

But the biggest headwind this year is rising interest rates. The 10 year treasury yield has doubled, going from 1.5% in January to 3% now. When rates rise that much, TIPS are going to act more like bonds than an inflation hedge.

This is especially true for longer-duration TIPS.

For example, the TIP ETF has an effective duration of 7.1 years.

Duration is simply a way to measure interest rate sensitivity. A duration of 7 years implies that for every 1% move in interest rates, the bond fund should move up or down by 7% in price. This relationship has some other variables but that’s a good rule of thumb.

The simplest explanation for the poor performance this year is that interest rates are up and inflation was baked into the pie more than it was last year. The good news for investors from here is rates are now higher — the bad news is you needed to eat some losses to get to this point.

There are ways to reduce the impact of interest rate changes on your inflation-protected bonds.

The Vanguard Short-Term Inflation-Protected Securities ETF (VTIP) has an average duration of just 2.7 years, making it much less sensitive to changes in interest rates.

The U.S. inflation rate first broke out above its long-term average of around 3% in April of 2021. Look at the performance of VTIP vs. TIP since then: 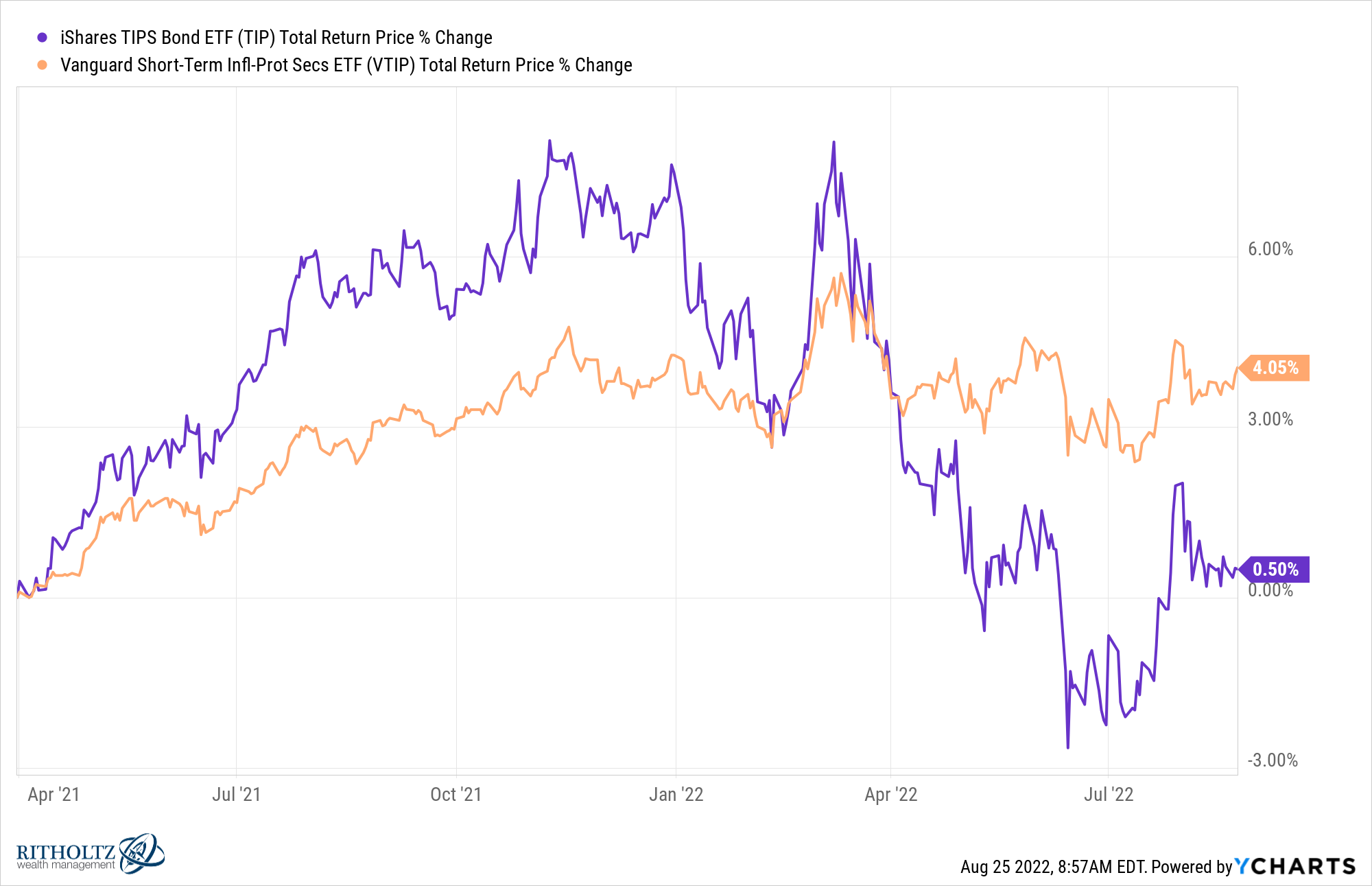 Short-term TIPS have outperformed longer maturity TIPS in that time and have done so with far less volatility. These bonds are outperforming because the inflation-indexed component is playing a larger role in their total return.2

So if you would prefer less volatility and a closer relationship to those inflation-adjusted yields, short-term TIPS are an option.

I would be remiss if I didn’t mention Series I Savings Bonds here as well. These bonds are about as good as it gets when it comes to inflation protection without any interest rate risk (read here for more details).

Unfortunately, there is a cap in terms of how much you can put into these bonds.

We discussed inflation-protected bonds and much more on this week’s Portfolio Rescue:

Josh Brown joined me to go over some questions on finding younger clients as a financial advisor, how young people should allocate their retirement funds and paying off student loans with winnings from a 10-bagger stock pick.

Here is the podcast version of today’s show:

1At maturity you get the higher of the original principal value (par) or the inflation-adjusted principal. That way you have a floor if there is deflation over the life of the bond.

2The opposite will be true if/when rates fall again. Then you would expect TIP to outperform because the bond component would carry greater weight in the total return.