In a 2014 interview with Justin Fox, former Federal Reserve Chair Alan Greenspan relayed a comment he made to Warren Buffett about the Oracle’s approach to investing:

Buffett is not the best example for normal investors because he has so much money it doesn’t really matter what he does with it. But one of the ways in which he built such a large net worth is through buying and then holding onto both public and private companies for a really long time.

Charlie and I have very pragmatic reasons for wanting to assure Berkshire’s prosperity in the years following our exit: The Mungers have Berkshire holdings that dwarf any of the family’s other investments, and I have a full 99% of my net worth lodged in Berkshire stock. I have never sold any shares and have no plans to do so.

In the bull market that preceded the current crisis, it wasn’t all that difficult to be a buy and hold investor like Buffett. Sure, there were a few corrections along the way, but nothing like the current situation.

Buy and hold is relatively easy when you’re making money. In fact, when stocks are going up, that’s typically when any type of risk management is punished. Doing nothing is the right move the majority of the time when investing but it’s far easier to sit on your hands when things are going well.

With all of the money that poured into index funds, ETFs and passive investment vehicles over the past 10-15 years, many professional investors were predicting a comeuppance when the next crash hit.

Surprisingly, the buy and hold investors at Vanguard are doing a nice job staying the course. The company released a report showing the number of clients who have traded in March, one of the worst months in stock market history: 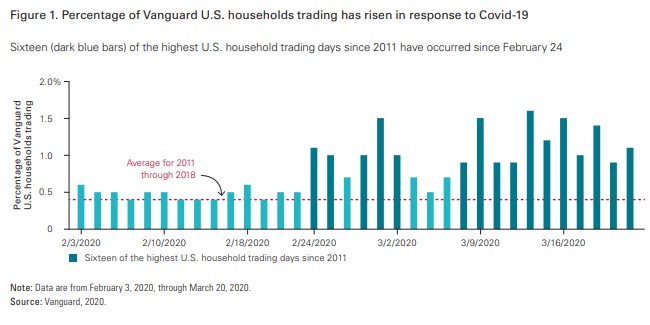 This data goes through last Friday, at which point the S&P 500 was down roughly 32%. You can see the trading is slightly above average but the numbers are commendable considering the situation.

They show that more than 90% of their self-directed investors haven’t made a single trade during the turmoil. And of the 8% or so of clients who have made portfolio changes, half of them made just one trade (and many of those trade were used to buy more stocks).

This thing could get worse. Maybe this crash happened so quickly these investors haven’t had time to allow the situation to sink in. If stocks don’t recover quickly or continue to fall, it’s always possible passive investors will panic sell.

But don’t go blaming mom and pop for the current volatility. They aren’t the ones doing the selling. If anything, most retail investors are doing nothing or even stepping in to buy.

I’m sure there are bound to be some casualties of capitulation by the time this crisis is over. But that has nothing to do with the type of investment vehicles people are using. There will be long-term investors, short-term traders, hedge funds, institutional portfolio managers and plenty of other investors who will sell for the wrong reasons at the wrong time.

If someone is buying at the bottom that means someone is on the other end of that trade selling to them.

I’m sure there will be stories in the coming months about the death of buy and hold. You can set your watch to it during a serious bear market.

This is only true for those who don’t understand how markets work over the long-term.

If you’re a buy and hold investor it’s important to remember a market crisis such as this comes with the territory. I’m stating the obvious here but it’s worth repeating — the stock market has returned roughly 9.7% per year over the past 90+ years. That 9.7% includes the Great Depression, wars, recessions, rising interest rates, falling interest rates, various political regimes, bear markets, booms, busts, inflation, deflation and everything in-between.