I’ll admit it. I didn’t think the 2010s would play out the way they did in the financial markets. Sure, stocks hit a few rough patches, but nothing like we experienced in the prior decade. This has been a fantastic 10 years for U.S. stocks.

And I’m not sure anyone predicted the not-too-hot-not-too-cold economic environment that saw no recession in the U.S., subdued inflation and a continued drop in interest rates following unprecedented central bank intervention.

Here’s my look back at what happened (and maybe more importantly, what didn’t happen) in the 2010s as it pertains to the markets.

To call the first decade of the 21st unkind to markets and the economy would be a massive understatement. It was a debacle. We lived through two recessions, including the worst economic crisis since the Great Depression, and two enormous stock market crashes which saw stocks drop by half each time.

Those brutal crashes bookended the decade of the aughts, and that led to a lost decade in the S&P 500, which saw the largest stocks in the U.S. as a whole fall nearly 10% in total from 2000 to 2009. Although the stock market had rallied mightily off the March, 2009 lows by the end of that year, many were predicting more of the same dose of pain in terms of crashes, volatility, and economic calamities in the years ahead.

So, naturally, the ensuing decade did the complete opposite. In fact, the 2010s was the first decade since 1850 (which is about as far back as we have good data) that the U.S. didn’t experience a single recession. The stock market had minor bouts of volatility but every correction turned out to be a buying opportunity as we’ve now seen well over 200 new all-time highs on the S&P 500 this decade alone.

As the 2010s wind down, and we get ready to usher in the 2020s, here’s a look back at what happened in the markets over the past decade that got us to this point.

The S&P 500 followed one of its worst decades on record in the 2000s with one of its best in the 2010s on both an absolute and relative basis. The S&P crushed all of the main asset classes as you can see from the total returns:

The S&P was up nine out of 10 years with the only down year in 2018, a loss of just 4.2%. Seven out of those nine years showed double-digit gains while stocks were up 20% or more three different years. 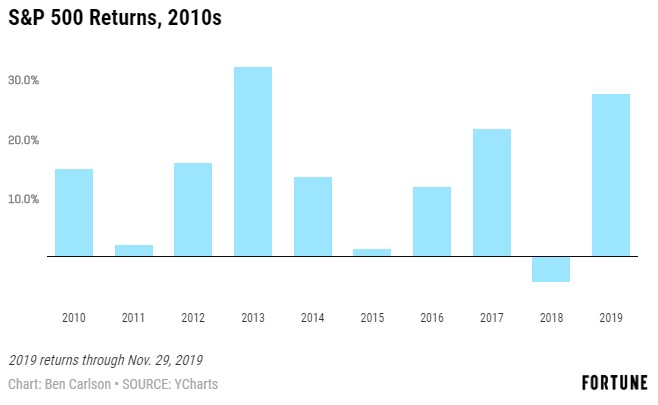 While large-cap U.S. stocks were tough to beat, there was a subset of stocks within that universe that did even better. Technology stocks had a phenomenal decade in terms of both growth and stock performance. Through the end of November 2019, the Nasdaq 100 was up nearly 400% over the course of the decade. That’s more than 150% better than the S&P 500 during that time.

Much of that growth came from a small handful of what are now some of the largest companies in the world. The combined market cap of Apple, Amazon, Microsoft and Google was $716 billion heading into this decade. That number currently stands at more than $4.1 trillion. 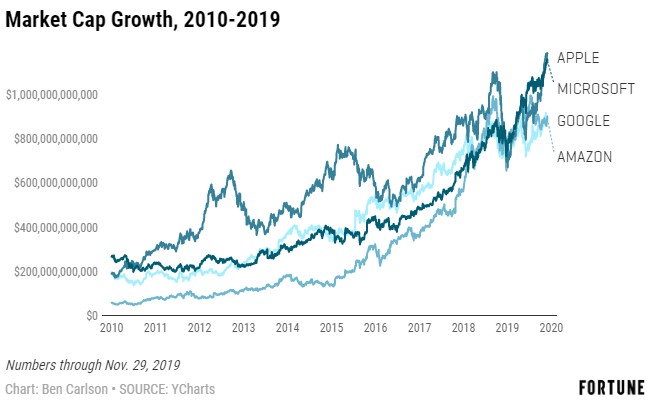 And these numbers don’t include the massive growth in Facebook shares; it went public in 2012. In what was surely one of the best acquisitions of the decade, Mark Zuckerberg and company bought Instagram for $1 billion that same year. It’s estimated Instagram will do close to $14 billion in revenue alone in 2019. Facebook is now a $575 billion market cap, rising from roughly $80 billion when the company went public. These 5 companies now make up just shy of 17% of the entire S&P 500 index.

The tech industry has quickly gone from scrappy upstarts to world-beaters in just a few short decades.

The 2000s were a wonderful decade for commodities, especially in the earlier part of the decade because of massive infrastructure spending by China. The current decade did not follow the same path. The Bloomberg Commodity Index, a basket of different commodities, was down nearly 45% this decade. The price of WTI Crude oil fell more than 27%. The lone bright spot was gold, which was up close to 30% in the 2010s but most of that price increase came in 2010 and 2011. Gold prices are actually still 25% below their peak from August, 2011.

Commodities are known for being a sector filled with varying periods of booms and busts. The 2000s were a boom. The 2010s were a bust.

It seems like every year throughout the past decade economists and market prognosticators predicted rising rates, but the actual pattern was more down than anything else. In fact, rates have actually been range-bound for most of the decade as you can see from the chart of the benchmark 10 year U.S. treasury yield: 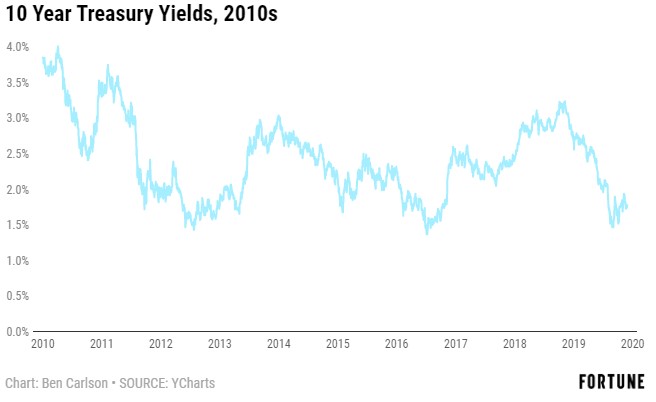 The 10-year yield began the decade just shy of 4%, and touched an all-time low of 1.37% in July, 2016. But rates essentially remained in a tight range between 1.5% and 3.5% for the majority of the decade. Rates have been falling since the early-1980s and seemingly don’t have much further to fall, so it’s no surprise we see a consistent stream of higher rate calls. But rates have not cooperated, and still sit below 2%.

After getting taken to task for more or less missing the financial crisis, you have to hand it to the Fed for their role in getting the economy on better footing this decade. Quantitative easing and near-0% nominal rates for a number of years led many to predict hyperinflation, a double-dip recession and more pain in the stock market from these unorthodox central bank actions. Instead, we’ve had the biggest decline in the unemployment rate since World War II, falling from a peak of 10% to the recent low of 3.5%.

This is even more impressive based on the fact that we’ve had three different Fed Chairs this decade (Ben Bernanke, Janet Yellen and now Jerome Powell). Many say the Fed waited far too long to raise rates after the Fed Funds Rate was effectively 0% from December 2008 through December 2015. That’s when the Fed embarked on a series of hikes that brought rates up well over 2% by the end of last year. Alas, we’ve now had three rate cuts in 2019 alone, which sounds like a lot until you consider the average decade since 1960 has experienced 23 rate cuts.

The Fed is not perfect. Nor are the central bankers omnipotent. But you have to give them credit for navigating the recovery much better than they navigated the onset of the financial crisis.

No one knows what the next decade has in store for investors but one thing’s for sure: the next 10 years will look nothing like the last 10 years.