My editor at Fortune asked if I had any thoughts on the potential market impact from the impeachment. I was hesitant at first because I don’t think you can put too much stock into these events in terms of how they’ll impact the markets.

And looking at the market impact from the admittedly small sample size of historical impeachments proceedings showed the markets basically do what they’re going to do regardless of the political theater. Here’s what I came up with.

This week Nancy Pelosi announced a formal impeachment inquiry of President Trump. In the summer of 2018, President Trump said, “I will tell you what, if I ever got impeached, I think the market would crash. I think everybody would be very poor.”

When investors see these types of headlines, the immediate reaction is to wonder how this will impact the markets. I’m not the first one to make these comparisons, nor will I be the last, but it can be instructive for investors to see how these things have played out historically to provide some context around these types of events.

The impeachment process was formally initiated against Richard Nixon in early May of 1974. This is how the S&P 500 reacted after these proceedings began: 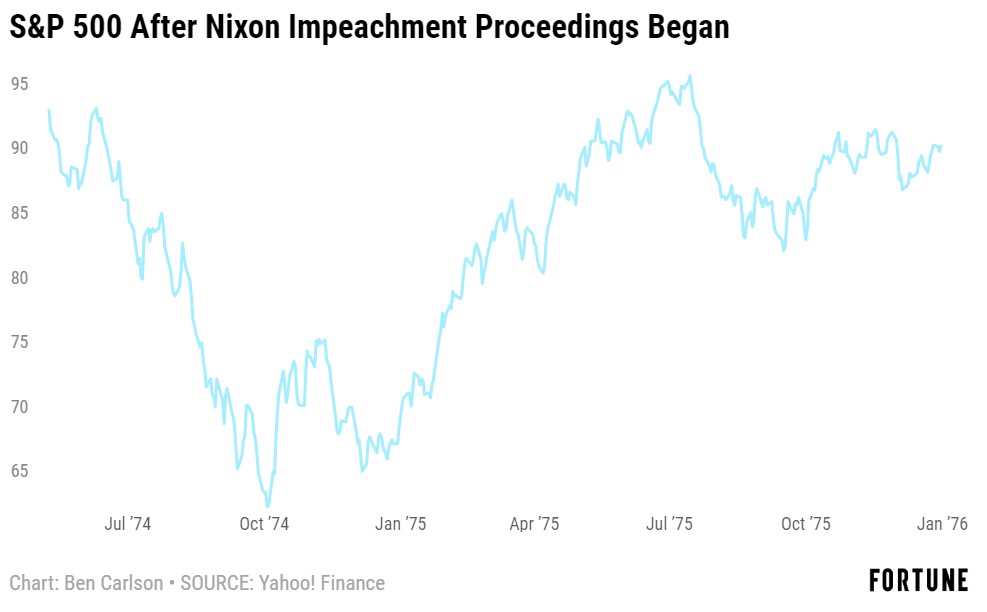 Nixon resigned on August 9, 1974. That day, the stock market was down a little less than 1%. The following week, stocks fell an additional 6.4%. From the time the impeachment process began until the time he resigned, the S&P 500 was down 13%.

You could say the uncertainties surrounding the resignation of a president caused upheaval in the stock market but if we zoom out a bit you can see the trend in stocks was already going down before this happened: 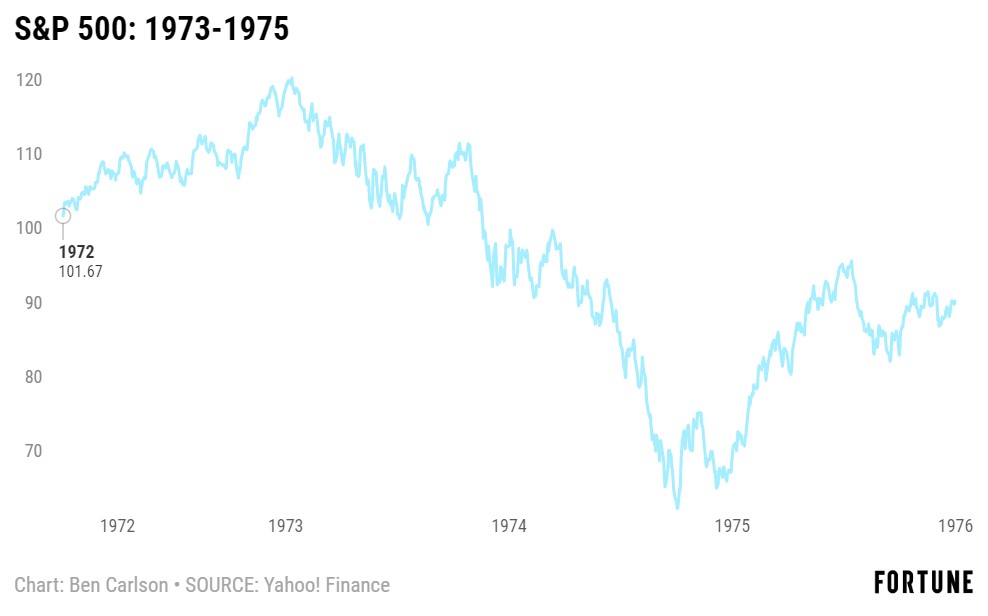 The stock market was already down 23% from the highs seen in early-1973. Not only was the market already going down, but the U.S. was in the midst of a recession that began in November 1973. So while you could make the point that Nixon’s scandal added to the market volatility, it certainly wasn’t the main cause of it. The market and the economy were both already heading south.

Impeachment proceedings for Bill Clinton began in October 1998. The stock market didn’t even pretend to care about this political drama: 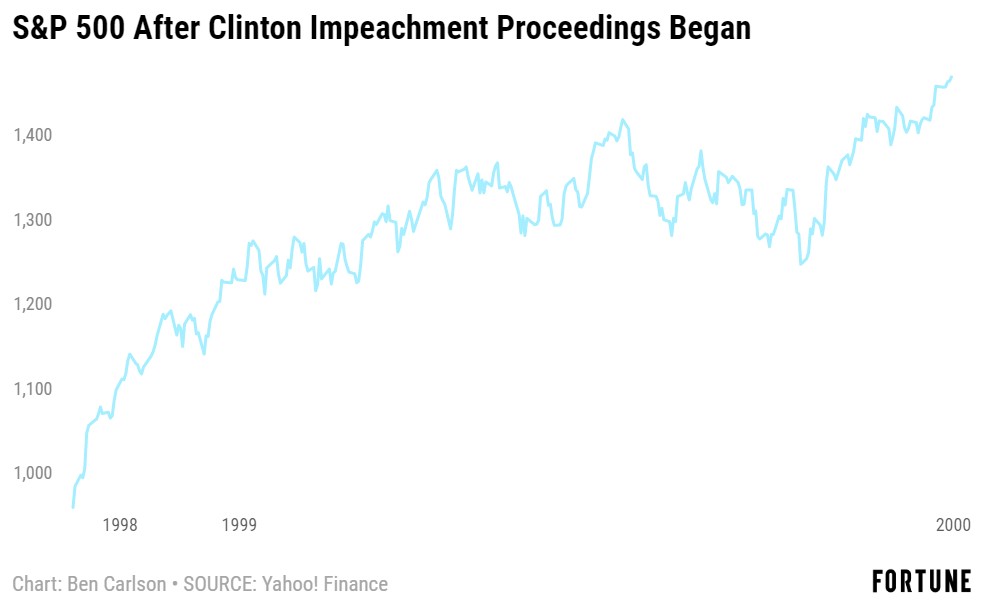 Clinton was acquitted in February 1999 but I’m not sure stock market investors would have cared either way. The tech bubble overwhelmed pretty much everything else in the late-1990s and this was no different. You can see stocks had already been rising well in advance of the Clinton impeachment proceedings: 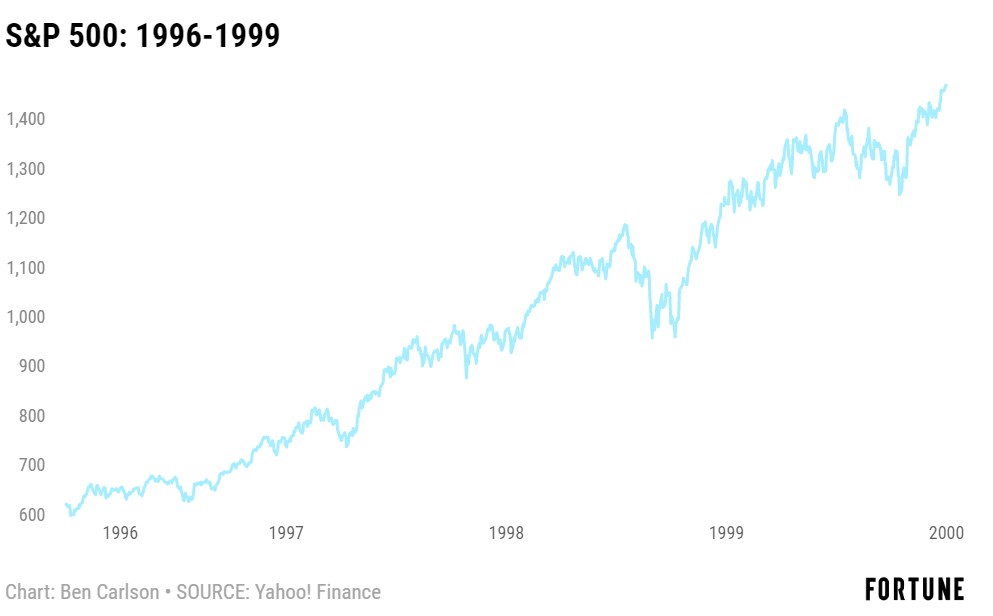 The S&P 500 was up more than 20% every year from 1996-1999. The dot-com bubble was a runaway freight train by the time Clinton’s impeachment saga hit the news. The stock market did sell off nearly 20% in the fall of 1998 prior to the formal impeachment process but that was due to Russia defaulting on its debt, not worries about the American presidential situation.

Geopolitical events are nearly impossible to handicap in advance when it comes to the market’s reaction. President John F. Kennedy was assassinated in Dallas on November 22, 1963. The stock market was closed the following Monday but when it opened again on November 26, 1963, it popped 4%. The S&P 500 finished up the following year, 1964, rising more than 16%.

There are a few reasons it’s so difficult to predict how political events will impact the markets:

1. There’s a big difference between the news itself and the market’s reaction to the news.

The stock market tries to be forward-looking so investors can never be sure exactly what’s baked into the price of stocks. This is especially true over the short-term as investors have been known to both panic buy or panic sell when the volume gets turned up in the news.

2. The sample size is extremely small.

In terms of a president being impeached, we’re dealing with a sample size of two here (Andrew Johnson was impeached in 1868 but that was well before the modern stock market existed). There’s no way we can draw any concrete conclusions from this data nor can we use it to make predictions about how the current situation will play out.

3. Investors should keep politics out of their portfolio.

Politicians and their partisan followers often like to think they have more control over the markets or the economy than they actually do. Markets don’t care nearly as much about politics or who the president is as most would assume.

Sure, there could be some short-term swings in price depending on the narratives or outcomes as this ordeal plays itself out. But eventually the market will win out and do what it wants to do.