People have seemingly been predicting the next recession before the last one even ended (remember the double-dip recession forecasts?). The problem is the economic machine is a complex organism. It doesn’t operate on a set schedule. And even if you could predict the exact timing of the next recession it still might not be all that useful for your investing needs. Here’s my exploration of this idea in a recent piece for Bloomberg.

Predicting a bear market can make you famous in financial market circles, but it’s certainly not an easy feat. Markets never follow the same script more than once, so trying to predict a peak in stocks is more about forecasting human emotions and sentiment than figuring out a precise formula or equation to follow. And people are unpredictable, to say the least.

There are a number of variables that could cause stocks to tumble, but the highest-probability event is simply an economic contraction. Stocks don’t need a recession to go into a bear market, but a recession increases the probability of seeing a bear market if we’re using history as a guide.

Since World War II, 10 out of the 12 recessions saw the S&P 500 go into a bear market in plus or minus 12 months around an economic slowdown. The old joke is that the stock market has predicted nine out of the past five recessions. That’s a decent batting average when compared with the endless parade of recession calls from pundits, strategists and portfolio managers since the last one ended in the summer of 2009.

I understand why so many people are intent on calling for a recession. It’s bound to happen eventually. The business cycle is called a cycle for a reason. But the economic machine doesn’t operate on a set schedule. As defined by the National Bureau of Economic Research, here is every recession in the U.S. going back to the Great Depression: 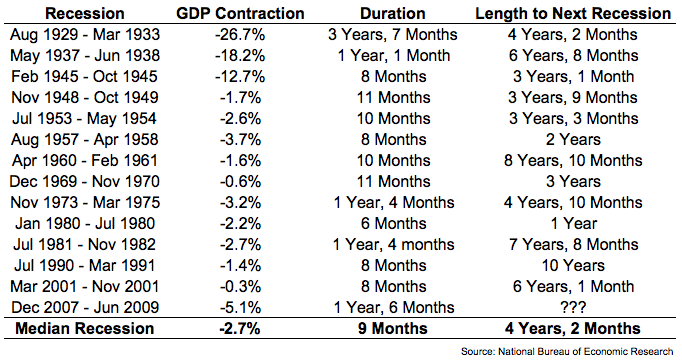 The Great Recession looks tiny in comparison to the downturns the economy experienced in the 1930s and 1940s. It’s worth remembering the U.S. was once an emerging market. From 1836 to 1927, the country went into a recession every three years or so. The average contraction was a drop in GDP of 23 percent.

Since the 1980s, recessions have been fewer and far between as the U.S. economy has matured. If the current expansion lasts another two years it will be the longest on record in the U.S.

Even if I were to tell you the exact date when the next recession will hit, you still may not be able to profit from this knowledge as much as you think. Take a look at the performance of the S&P 500 during, leading up to and after each one of these recessions:

The stock market was actually up during half of the past 14 recessions. Stocks don’t show any clear signs of melting up or melting down in the lead-up to an economic downturn either. Stocks are supposedly a forward-looking indicator, but looking at the performance in the six months prior to a recession, it doesn’t appear to have a very solid forecasting track record.

There’s no rhyme or reason for the market’s performance during these slowdowns. While stocks got crushed during the Great Depression, the most recent recession and the recession of 1937, the double-digit contraction in 1945 saw a big uptick in stock prices. The highest-probability bet for investors is to invest when the recession is over. The median gain in the 12 months after a recession is over was 14 percent.

What makes this even more difficult is the fact that many people don’t even know we’re in a recession when it’s going on. While it was fairly clear in late 2008 that something terrible was happening with the economy, NBER didn’t announce it was a recession until December, a year after it officially began and just six months before it was over. The recession that began in the summer of 1990 wasn’t officially declared until April of 1991, a month after it was done with. The mild contraction that began in 1980 wasn’t announced until a year later, just as the country was heading into yet another recession.

The point is that each economic and stock market environment is unique. There are no playbooks that will tell you when to get out and when to get back in again. The severity of the next recession will have a lot to do with how things play out in the stock market, but it all depends on how well investors handle it when it finally arrives. The level of panic will rule the day, and that’s not something that can easily be calculated or forecast.

Even if I had the ability to tell you the exact date the next recession will begin, you still wouldn’t have any idea how stocks will perform. The best you can do as an investor is to build a portfolio that is durable enough to withstand a wide range of outcomes.