There’s an old say that, “History doesn’t repeat itself but it does rhyme.”

This one is used quite often in the finance realm. But when it comes to financial news, this phrase needs to be reversed to, “Financial news doesn’t rhyme but it does repeat itself.”

The biggest reason for this is the fact that pundits and investment professionals alike have a hard time changing their mind. This issue has been on full display in recent years. For example, everyone wants to call the next stock market bubble following the meltdown we saw in 2008:

On the flip side, apparently this has been the most hated bull market of all-time for a while now:

Not to be outdone by stocks, there has also been chatter about a bubble in the bond market for years:

October 5, 2014: Bond market may be more fragile than you think (USA Today)

June 9, 2013: When the bond bubble finally bursts a lot of investors will get hurt (Telegraph)

It’s also hard to forget the technology bubble in the late-1990s, so plenty of people have been on the lookout for the next tech bubble, as well:

September 1, 2015: Is Silicon Valley in another tech bubble? (Vanity Fair)

And it’s not just bubble spotting that people predict on a regular basis. People are really hung up on trying to predict the death of things. The 60/40 portfolio apparently has nine lives:

November 27, 2013: Investors sticking to the 60/40 portfolio rule are likely to get badly hurt (Business Insider)

Value investing is in the same boat. Value seems to die every 7 years or so:

And just for fun, here’s one of these I did before on the Fed: 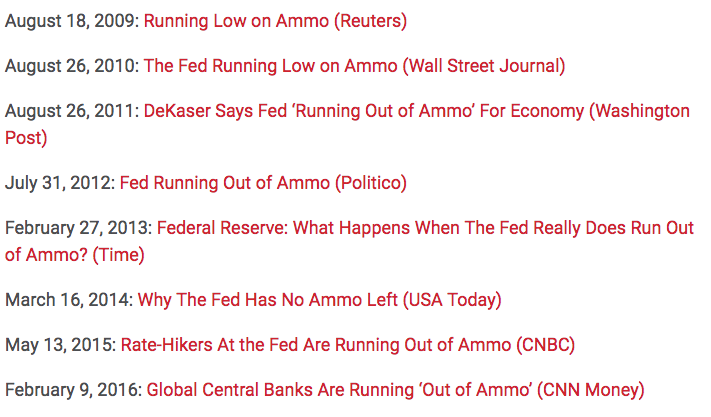 The Jim Rogers crash predictions one was a big hit too: 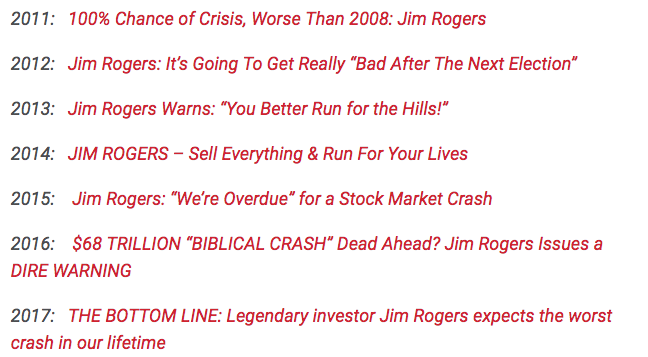 Maybe all of these things are true but they just haven’t happened yet. There are no counterfactuals in the markets. Stocks or bonds each could have gotten crushed in an alternate universe assuming a few things would have gone differently.

But it’s important for investors to remember that investing based on the headlines is a bad idea. The fact that we have access to more information than ever these days is a great thing, assuming you have the correct filters in place. Most people don’t, so they become consumed by every little snippet or viral headline they glance at.

One of these days one of these warnings will seem prescient. More likely than not, the next person or firm to “call” the next bubble or crash will be more lucky than good.