I remember reading an article at the start of 2013 that concluded, “This market reeks of euphoria.” The S&P 500 is up around 90% since then. The problem with the firehose of information these days is that it’s easier than ever to latch onto a narrative that fits your current world view. In the financial markets, this makes it harder than ever to gauge investor sentiment. Here’s a piece on wrote for Bloomberg that describes why this environment has been so difficult to handicap.

The finance industry is full of people who are paid to worry about risks in the markets. And there is never a shortage of things to worry about  — geopolitical risk, corporate earnings, valuations, interest rate changes, inflation, monetary policy, ETFs, bond market liquidity, to name just a few. The latest risk everyone seems to be worried about is a lack of risk, or rather volatility has been so low for so long that investors have become complacent.

Markets are tricky since even a lack of risk can be worrisome because investors could become subdued into thinking low volatility is here to stay and then overreact when it inevitably returns. For example, the S&P 500 hasn’t had a 5 percent pullback since July 2016. That’s the longest such streak without a minor market correction since 1996. The VIX, which is a supposed to be a measure of implied or expected volatility, is at or near its lowest levels in history.

So volatility has been low and the market hasn’t had a correction in some time. But does this necessarily mean that investors are complacent? Has everyone already forgotten about the carnage the markets experienced during the financial crisis?

It’s always difficult to gauge the emotional stability of the market as a whole since there are so many competing opinions, ideologies, investment strategies and investor goals, but we can take a look at a few different data points to get a better idea about how investors view the markets today to check the level of complacency.

Retail investors were once used as a sentiment indicator but now that greater than 90 percent of all trading is done by professionals it’s become much harder to use mom and pop as a market tell. According to a recent Bank of America survey, almost 40 percent of fund managers think that global equity markets are overvalued, the highest level since January of 2000. And 80 percent see U.S. markets as the most overvalued in the world. 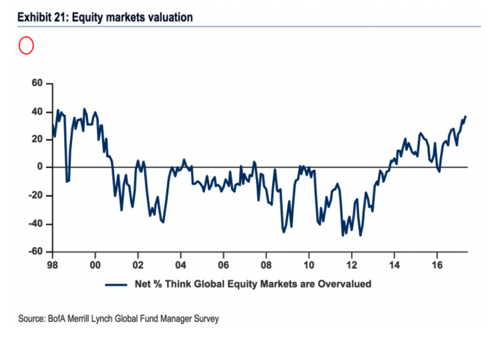 Professor Robert Shiller has been sending out questionnaires to professional and individual investors since the late-1980s to learn about their opinions on the stock market. The percentage of investors who think the Dow Jones Industrial Average will rise over the next year is at all-time highs but concern for market valuations and a potential market crash are both showing much higher levels of anxiety.

Also, the VIX is not the only gauge of stock market fear using options. The CBOE SKEW Index (aka the black swan indicator) is an index that looks to derive the price of tail risk in the S&P 500. Tail risk is simply the idea that events will occur far outside of the normal range of possibilities. The current reading of the SKEW Index has come down but it reached its highest level ever in recent years and remains elevated: 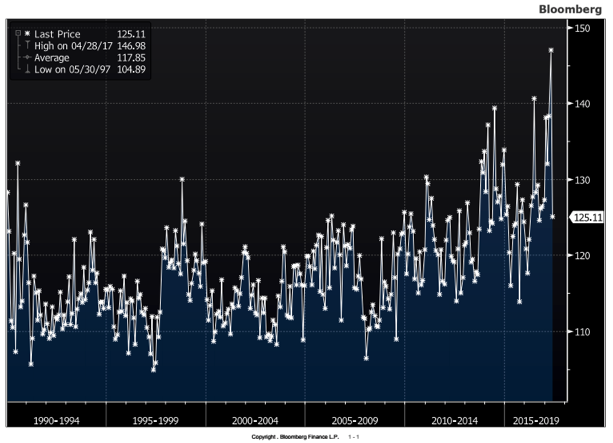 The index typically vacillates between 100 and 150. The closer the current level is to 100 the more likely it is that investors assume a tail risk event is negligible. But as the indicator rises it means investors are far more worried about an outlier event because they are buying downside protection for tail risk events in the form of put options. The higher this index goes the higher the probability investors are assigning to a market crash. The market didn’t crash in 2015 but there was a correction and the SKEW index was also elevated in the run-up to the Flash Crash in 2010.

You’re never going to get a perfect all-clear or get-out-now signal from the markets and this time is no different. Investors are being given reasons to be complacent but that doesn’t necessarily mean everyone is. In an interview earlier this year Oaktree Capital’s Howard Marks told my colleague and fellow Bloomberg columnist Barry Ritholtz that he felt investors had reservations about the markets but most don’t have many other good options:

I believe that enthusiasm is not unrestrained, on the other hand, people may be thinking in not a bullish way but I think they’re acting in a bullish way. What accounts for the difference? Rates near zero. And when you live in a low return world, you have to take risk to get return. People are willing to take risk because they’re handcuffed volunteers. People who do things not because they want to, but because they have to.

In the past, bull markets were mixed with investor optimism, euphoria and participation in the markets. Investors are participating in this bull market but you get the feeling that many of them aren’t happy about it because they’re waiting for the other side to hit in the form of a sustained market sell-off. The low interest rate environment has made it very difficult to use sentiment indicators as a predictive tool in the markets.