Investors love a good story which is why rules of thumb and simple cause and effect relationships tend to get a lot of traction whether they’re backed by actual evidence or not. In terms of policy, many seem to believe that a reduction in tax rates will be a huge boom to the stock market. In this piece I wrote fro Bloomberg I take a look at this claim to see how this one stacks up.

President Donald Trump and his staff have promised a “big announcement” this week on tax reform and an overhaul of the code. Based on Trump’s public pronouncements, most people assume this means lower taxes for most individuals and corporations. The president tweeted: “Big TAX REFORM AND TAX REDUCTION will be announced next Wednesday.”

Those in the markets hope that lower corporate and individual tax rates will spur more spending from consumers and more investment from businesses.

In theory, this would make sense. Lower taxes mean more money for individuals and businesses to spend as they please. But the markets don’t always adhere to textbook theories because the humans making the decisions in the markets aren’t always perfectly rational agents operating in a vacuum.

Here is the question for investors: Does the stock market care about tax rates?

Before we get to that question, let’s look at the history of corporate and individual tax rates (Obviously, only a small share of the population pays the top marginal tax rate, but these numbers work for illustrative purposes because these rates tend to see the biggest changes). The following graph shows the highest marginal tax rates for both individuals and corporations going back to the mid-1920s: 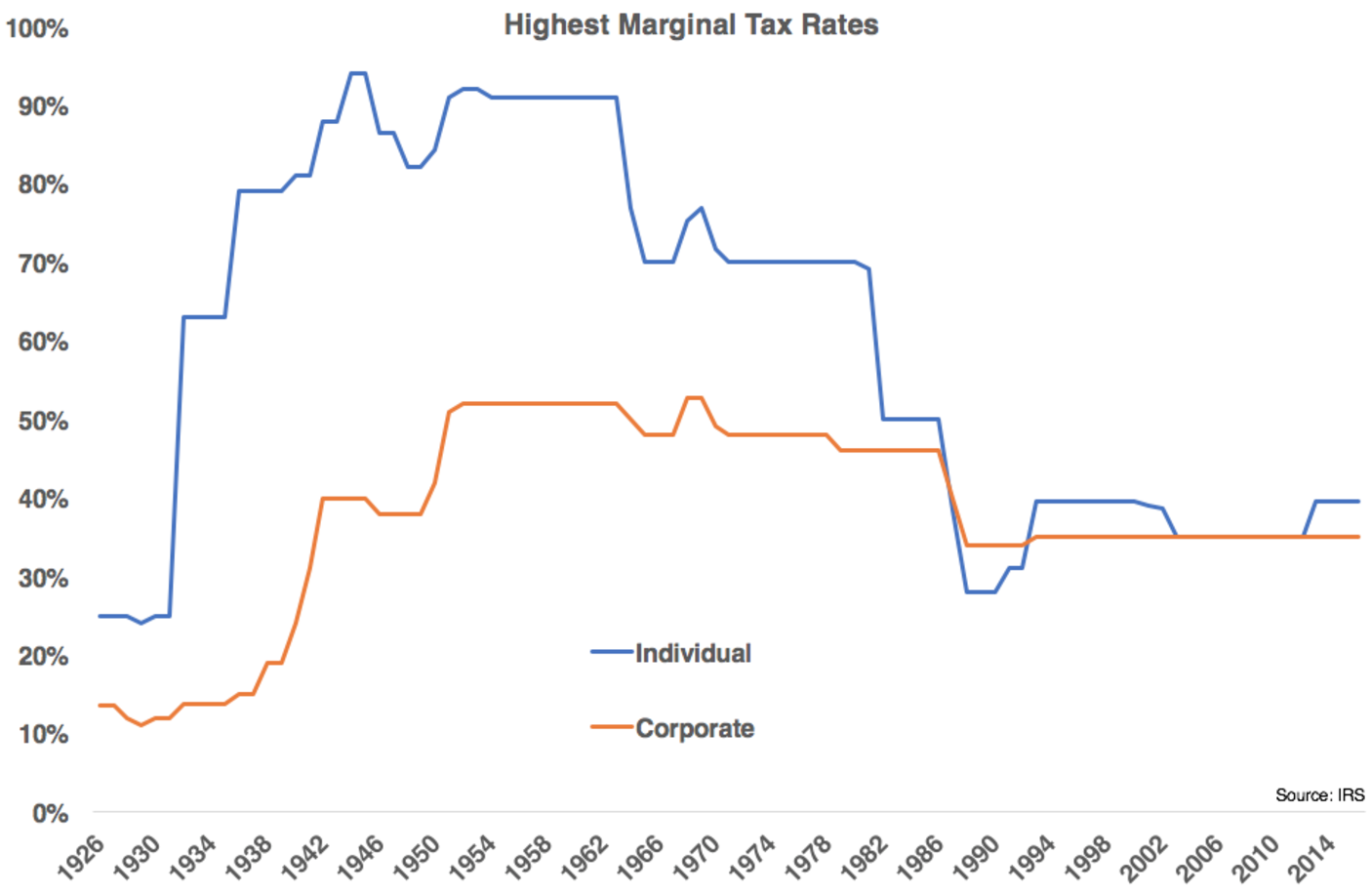 Tax rates were fairly low in the 1920s but ramped up quickly following the Great Depression and through World War II. Mixed in with a few plateaus, tax rates have more or less been falling ever since, save for a marginal increase in the highest rate individuals pay a few years ago.

Using this same data, I took the average top marginal tax rates and compared those to the corresponding annual stock market returns in each decade since the 1930s: 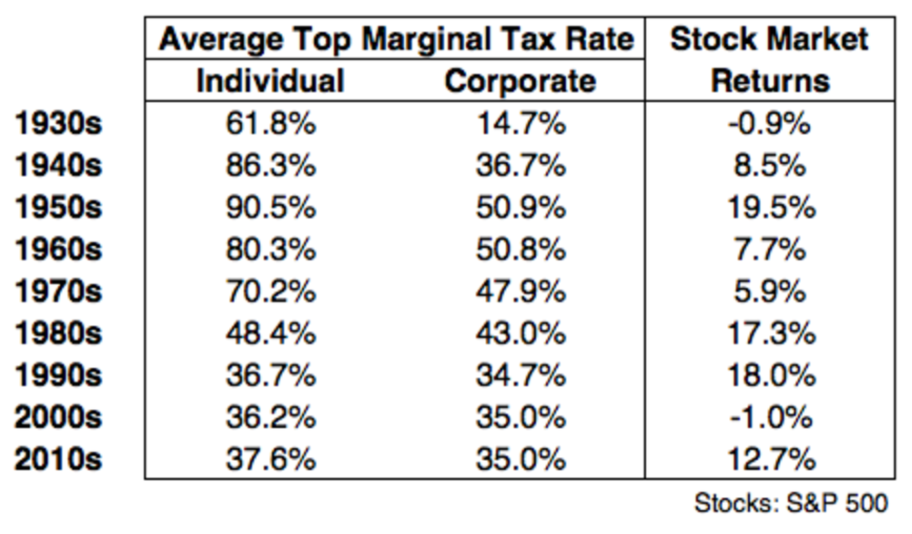 Corporate taxes were extremely low in the 1930s, but stocks had some of their worst performances in that decade. Tax rates were rising in the 1940s and 1950s, but stocks did well. The top tax rate on individuals was falling throughout the 1960s, 1970s, 1980s and 1990s, with mixed results.

President George W. Bush introduced a series of tax cuts in 2001, during a mild recession. Stocks were down by more than 10 percent for two more years, but that had more to do with the bursting of the tech bubble than fiscal policy. In terms of stock market performance, the 1960s tax cuts were much more successful, but that boom had already begun in the 1950s. Rates also fell substantially in the 1980s under President Ronald Reagan, which likely acted as a tailwind for the boom in the stock market during that decade.

Tax rates for both individuals and corporations were more or less stable during the 1990s, which turned out to be one of the greatest economic and stock market periods in U.S. history. Rates remained stable over the following decade, but the 2000s brought negative returns along with two recessions.

It’s difficult to draw any hard conclusions based on the historical data. The stock market has been able to handle high marginal tax rates in the past, though investors can’t count on smooth sailing simply because corporations or individuals pay less in taxes.

Trump has stated that he favors a decrease to a 15 percent corporate rate from the current 35 percent. We’ve never seen such a drastic drop in corporate rates, though the top marginal tax rate for individuals did fall in similar fashion during the 1960s and 1980s.

This remains unclear, however. An uptick in the fundamentals is something this market could use, considering that earnings for the S&P 500 peaked in early 2014 and have yet to breach that level again, but it’s hard to say how the market will react to these changes.

The big question is whether tax reform will boost the confidence of the corporate sector to invest more money in people, plants, equipment, or research and development. We won’t know until we see how the markets react to any potential changes in the tax code. While there’s no clear relationship between historical tax rates and subsequent stock market performance, anything that gets animal spirits going by inspiring confidence in our business leaders should be a positive for the markets.

Unfortunately, getting things done in Washington is never easy. And even if we do see an overhaul of the tax code, these measures often operate on a lag and take time to have an impact. There’s an old saying in the markets that the reaction to the news matters more than the news itself. Regardless of what happens, the only thing that matters to the market is how much of any changes is already priced into share prices.