Bloomberg’s Eric Schatzker had a wide-ranging interview this week with Larry Fink, head of the $5.1 trillion fund behemoth Blackrock. The entire interview is worth a read for anyone interested in investment management but Fink’s thoughts on the retirement crisis stood out to me:

We don’t spend enough time as a society understanding how bad the retirement system is in this country. I think so much of the anger in this past election is based on people’s fear of their future. People are frightened; they know they haven’t saved enough money for retirement. They’re going to be highly dependent on Social Security—which, if that’s the only source of income, means living in poverty. In addition, the bigger problem many of our cities and states are facing is that their retirement plans are defined-benefit plans. Their liabilities are so large, and increasing, especially as we transform deadly diseases into chronic ones. That translates into greater longevity and—you’re witnessing it every day as an American—underspending on our infrastructure. It’s a direct cause of the financial positions of state and local governments. And it’s only going to get worse.

I believe the recognition of our precarious retirement position is one of the most underappreciated future crises in this country. I think this crisis is going to be much bigger than health care. Health care is immediate. If you don’t have proper health care, it is today’s problem. But as you know—investing, the whole concept of compounding—if you’re not building your nest egg year after year after year, you’re not going to have enough savings to retire with dignity.

There’s a lot to unpack here. I agree with Fink that pensions are going to cause a lot of problems for state and local governments. It’s going to be very difficult for municipalities to prioritize in the years ahead as pension burdens continue to grow.

But I also think his thoughts about health care and saving for retirement were enlightening. Echoing these sentiments, the Wall Street Journal surveyed a group of retirees to gauge their biggest worries about retirement. Here’s what they found: 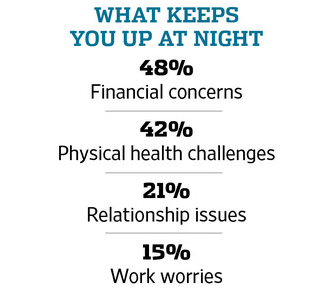 Health and wealth were the two biggest worries for those in or approaching retirement. The difference here is that while science will continue to progress and make advances in health care, it’s really difficult to make advances in retirement saving when you’ve already missed the boat.

I like the way Fink frames health care as being immediate while building a nest egg takes time to compound. This is quite common when dealing with our finances — urgency tends to trump importance. Obviously, your health is important but at least there are short-term solutions to most health issues. For many personal finance issues, there really aren’t any short-term fixes.

Former President Dwight Eisenhower once told a group he was giving a speech to the following when discussing how he would prioritize his presidential duties: “I have two kinds of problems: the urgent and the important. The urgent are not important, and the important are never urgent.”

This is a huge part of the problem with trying to get people to think in terms of saving early and often to enjoy the fruits of compounding later in life. Things that are important (retirement planning, saving, insurance needs, etc.) are easy to ignore. Instead, there’s a long list of urgent items you can do right this instant that makes you feel like you accomplished something, even if they don’t allow you to get ahead.

You’re checking things off of a list that have a minor impact but give you small wins.

In The Power of Habit, Charles Duhigg talks about how this idea of small wins can help you succeed, as long as you learn to focus on the right areas. He gives the example of how gold medal swimmer Michael Phelps and his coach experimented with this idea:

“We’d experiment, try different things until we found stuff that worked,” Bowman [Phelps’s coach] told me. “Eventually we figured out it was best to concentrate on these tiny moments of success and build them into mental triggers. We worked them into a routine. There’s a series of things we do before every race that are designed to give Michael a sense of victory.”

Small wins are exactly what they sound like, and are a part of how keystone habits create widespread changes. A huge body of research has shown that small wins have enormous power, an influence disproportionate to the accomplishments of the victories themselves. Once one small win takes place, forces are set in motion that favor another small win.

It helps to see progress and get that sense of victory to stick with the important stuff. It’s just that saving and compounding take a while to get to that point. The paradox here is by the time important financial tasks in life become urgent it’s probably already too late to do anything about them.

Further Reading:
Overcoming a Late Start to Saving for Retirement