Since winning the election in November there’s been constant speculation about what Donald Trump’s policies will mean for the markets.

While it’s always fun for investment people to debate the merits of economic plans or tax policies, there are plenty of risks to consider with Trump’s ways of doing business. He’s tweeted or made statements about a number of different industries and corporations. People are worried about his regulatory ideas. He’s threatened several countries or their leaders.

My colleague Josh Brown spoke with NPR’s David Brancaccio this week and voiced some concerns about the potential ramifications:

The reason why U.S. stocks trade at a premium to stock markets around the world — one of the main reasons why, there are several, but one of them is that people know that the rule of law is respected. Our financial markets are governed. We’ve got a strong regulatory system. Contract law is first and foremost in business dealings. So when you exchange your dollars for essentially a piece of paper, the only thing backing that piece of paper is the rule of law. So if you feel like the rule of law is being corrupted or disintegrating or worse, then it’s hard to get your head around: “Well, do I really want to pay 25 times earnings or 20 times earnings for a business and I’m only receiving essentially a certificate? Maybe I’m willing to pay less.” And that kind of thinking starts off subconscious, but ultimately that can be very damaging.

No one really knows if Trump’s policies will have these effects but it’s a risk worth considering.

Other than the inflation-induced bond bear market of the 1950s-1980s, U.S. investors haven’t really experienced much in the way of deep risk in the post-WWII era. Stocks fall occasionally but have always recovered in due time.

The four main causes of deep risk according to Bernstein are hyperinflation, prolonged deflation, devastation (wars or geopolitical disasters) or government confiscation of assets. Here are his examples of each in what he calls the four horsemen of financial disaster:

For the most part, modern-day investors in the U.S. haven’t really had to deal with any of these risks, which is nice. None of these risks are very fun to consider, but there are ways in which you can protect yourself. Here’s a table from Deep Risk that lays out how to manage each risk: 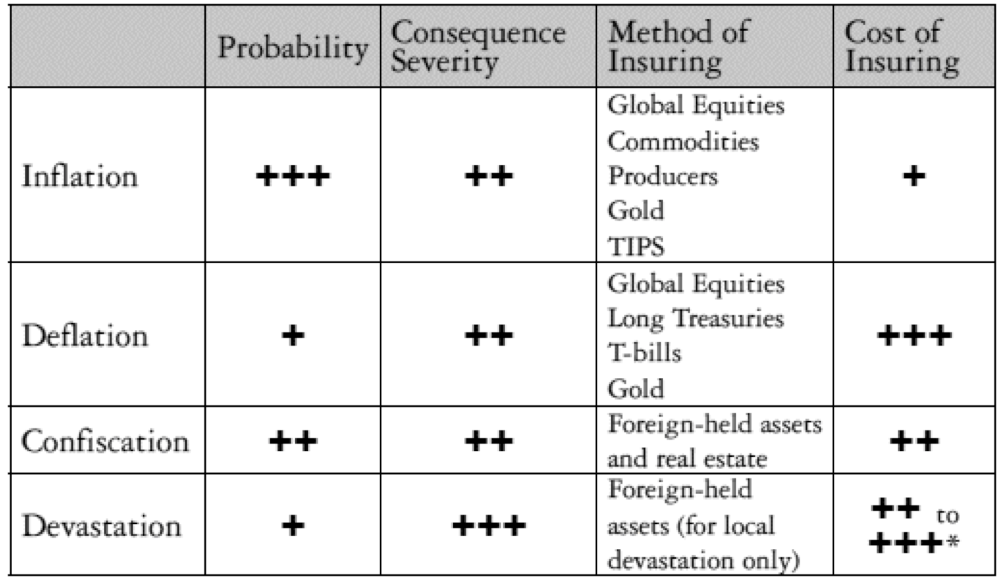 The good news is that a globally diversified portfolio can mitigate many of these risks. The biggest problem for investors dealing with deep risk is the concentration of assets in a single country. Home bias is a killer if you’re dealing with severe inflation, deflation, war or confiscation.

You can also think of shallow risk and deep risk in terms of where you are in your investment lifecycle. As a young person with many years ahead of you and oodles of human capital at your disposal, shallow risk should be the least of your worries. You should welcome bouts of volatility because it will allow you to buy in at lower prices over time.

On the other hand, older or retired investors should have a more balanced take on how they approach these risks. While you still may have a few decades in retirement to grow your assets, you also have to worry about seeing your investments decline when you need to spend down your portfolios.

Let’s hope shallow risk — run-of-the-mill market volatility — is the only thing we have to worry about over the next four years. But with Trump threatening countries, companies, regulations and industries, it’s worth understanding what could happen if we do experience deep risk within our financial markets.

Investors have to understand how to protect their financial assets under a wide range of scenarios and different types of risk.

Sources:
How the rule of law can affect the stock market (Marketplace)
Deep Risk: How History Informs Portfolio Design