In the summer of 2007, the markets experienced a huge dislocation that was something of a precursor to the financial crisis. Many of the largest, well-known quant hedge funds all started blowing up at the same time. Everything they were buying was going down while everything they were shorting was going up, causing massive losses for some of the biggest funds in the business.

These strategies had performed brilliantly for years, but all of the sudden they stopped working. The assumption is that a large fund made some bad bets and received margin calls because they used leverage to amplify their returns, requiring them to sell anything they could. And since many of these funds use similar approaches, many fund managers capitulated after large losses which led to even more selling.

A few months later, AQR’s Cliff Asness, himself a quant fund manager, wrote a post-mortem for Institutional Investor to try to get to the bottom of what happened and come to the defense of his style of investing. One line he wrote has stuck with me ever since:

Upon seeing a friend in good health — or even on death’s doorstep — would you really approach the person and say, “Great to see you — are you still alive?” If you have to ask, you probably already think quant investing is dead.

Lately, I’ve been hearing a lot of people ask a similar question because of the rise in popularity of index funds — Is active management dead? If you have to ask…

It seems like we can’t go a single day without seeing another article talking about how indexing or passive investing is taking over the fund industry. And looking at charts like this, one would assume that it is (from the latest Mauboussin piece): 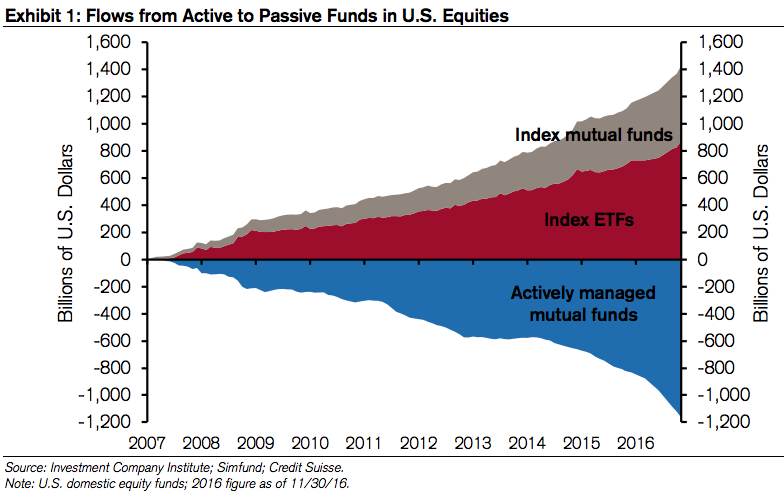 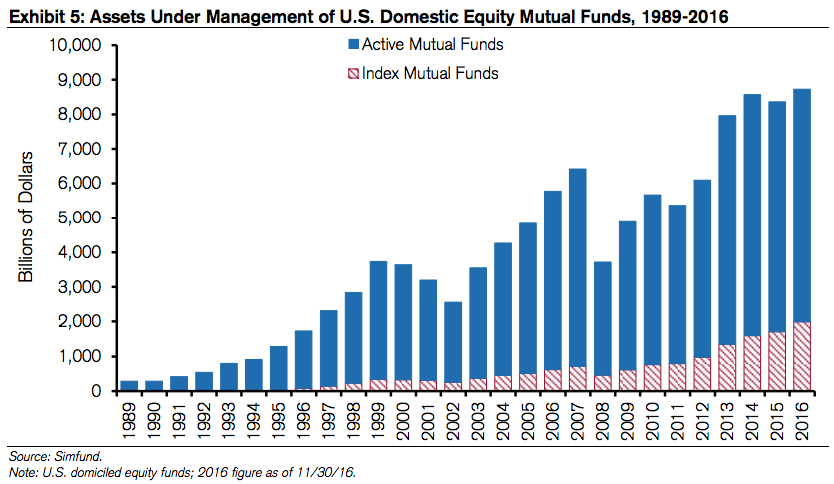 The availability heuristic is a mental shortcut that causes people to rely on recent examples that come to mind when evaluating certain concepts. I think there’s some of that going on in this instance because of the constant drumbeat of stories on the popularity of index funds and ETFs. People don’t realize that active management is still the dominant force in the markets.

According to Vanguard’s CEO Bill McNabb, although indexing represents over 30% of the mutual fund world, it’s only 15% of the entire U.S. stock market while it’s less than 5% of the global market.

In his book, The Institutional ETF Toolbox, Eric Balchunas estimates that there is a combined $75 trillion or so of institutional capital (pensions, insurance companies, endowments, foundations, sovereign wealth funds, etc.). These funds have just around 1% of that $75 trillion in ETFs. Institutions have trillions of dollars in separately managed accounts and other fund structures such as limited partnerships.

My point here is that while everyone has been busy writing the obituary for actively managed funds, we’re not even close to seeing the grim reaper just yet.

The average fund fees for actively managed funds still dwarf those of index funds and ETFs by about 400%, give or take. That means these fund firms are still raking in way more money in fees than their low-cost counterparts. You’re going to have to pry that revenue from their dead, lifeless hands in most cases. My guess is we’ll see a lot of captains in the fund world go down with their ship as many firms will die off or get bought out. But they’ll still be earning a decent living in the meantime.

At our EBI Conference a few months ago, Charley Ellis brought up the fact that there are 325,000 Bloomberg terminals worldwide (the premium data source for investment professionals), 120,000 CFA charterholders (plus another 250,000 candidates looking to obtain their CFA). Add to that the countless MBAs, PhDs, economists, quants and wanna-be Warren Buffett’s and Stanley Druckenmiller’s and there is still a ton of brainpower looking to outperform the markets.

Here’s Ellis in his book, The Index Revolution, discussing why he doesn’t feel active management is going away anytime soon:

First, while index funds and exchange traded funds (ETFs) now approach 30 percent of stock market assets, their turnover is so small compared to that of active investors that they account for less than 5 percent of trading, and trading is what sets prices.*

Second, the only way to reduce the competitive striving of active investment managers would be to make their work so unrewarding that they would decide to quit. Given how highly compensated active managers are these days, it would take an awfully large drop in compensation to cause many active managers to leave the market.

The trend towards low-cost investment products is one of the best things to ever happen to investors. And I believe this trend is a secular change. There’s no going back now. Many of these highly-priced mutual funds and hedge funds will continue to charge high fees but eventually, this trend is going to overwhelm this business model and they’ll lose assets, have to lower their fees, get bought out by another firm or go out of business.

But these things never happen overnight. It will take some time to see changes.

We’ll see some consolidation in the fund world in the years to come. And this tidal wave from active to passive products probably won’t slow down for some time. But don’t get it twisted — active management is not dead. It still dominates the markets, even if indexing is gaining ground in huge chunks.

Further Reading:
The Passive Investing Revolution That’s Not So Passive

*It is worth pointing out that some ETFs can see enormous turnover so the trading is shifting from individual names to ETFs themselves.