Nearly four out of five working households have retirement savings of less than one times their annual income. For those who carry a balance on their credit card, the average amount owed is over $15,000. Forty-seven percent of people would have a hard time coming up with $400 in the case of an emergency.

The problem with these types of statistics is that they don’t tell you anything about the actual people enduring these financial struggles. Tim Maurer has a very simple quote that speaks volumes on this when he says that, “Personal finance is more personal than finance.”

There are so many factors that affect a person or family’s finances — where you live, what career path you take, how much financial support you receive from family, how your family and friends view money, good luck, bad luck, how much money you make, poor choices, hard work, student loans, healthcare spending, a lack of education or understanding about how to run your own finances, what your lifestyle inflation looks like, what your personal relationship is with money and the list could go on and on.

I was reminded of how personal this finance thing can be by two stories I read this week on the subject.

The first was a piece in The Atlantic written by Neal Gabler. Gabler is a successful author who has written critically acclaimed, award-winning books. He’s been a writer for TV shows. He’s owned homes in Brooklyn and the Hamptons. He’s also, for all intents and purposes, broke:

In my house, we have learned to live a no-frills existence. We halved our mortgage payments through a loan-modification program. We drive a 1997 Toyota Avalon with 160,000 miles that I got from my father when he died. We haven’t taken a vacation in 10 years. We have no credit cards, only a debit card. We have no retirement savings, because we emptied a small 401(k) to pay for our younger daughter’s wedding. We eat out maybe once every two or three months. Though I was a film critic for many years, I seldom go to the movies now. We shop sales. We forgo house and car repairs until they are absolutely necessary. We count pennies.

It wasn’t a single poor decision that caused his financial issues. Gabler overextended himself on his real estate purchases and credit card debt. His wife stopped working once they had kids. He sent his children to private school and some of the top universities in the country. He also failed to communicate the family’s financial issues with his wife as the problems piled up.

Each of those decisions probably seemed very reasonable at the time. Just like compound interest slowly builds upon itself over time until it becomes an unstoppable force, so too does the debt cycle, but leverage works against you.

The second story was in this month’s money issue of Esquire. They detailed the financial lives of four men at different levels on the income scale. Each was asked the same questions about how much money they have, what their budgets look like, how happy they are, what they can afford and so forth. It was fascinating to see the different responses. The following one stood out to me (the first response is from the highest earning gentleman on the left and the second comes from the gentleman on the right making the least): 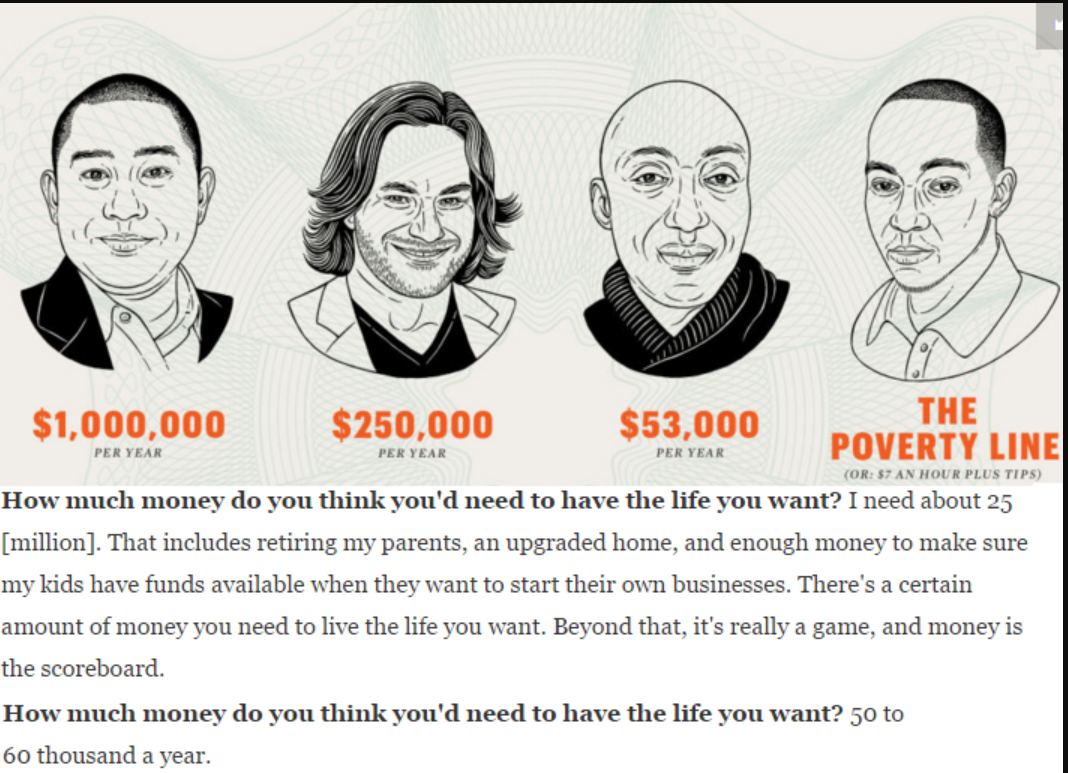 Reading through these kinds of stories is a great way to humanize the problems people face with their finances. Everyone worries about their finances, but those worries change depending on your standing and how much money you have.

Just like there’s not a single problem that causes people’s financial troubles, there’s not a single solution that’s going to solve all of their troubles either. It’s easy to judge others, but also easy to see how things can get out of control for some people. Some experts think you need to be a minimalist who eschews the consumer lifestyle. Others think you should focus on making more money and spending it however you like. Some call for more personal responsibility while others want the government to step in to make saving mandatory or expand the safety net.

I don’t have all the answers, but here are a few takeaways from these articles:

Talk about money. Gabler’s piece in the Atlantic was brutally honest, and I applaud him for laying it all out there like he did, but that level of transparency much earlier in life could have helped. He kept their financial troubles from his wife:

With my antediluvian masculine pride at stake, I told her that I could provide for us without her help—another instance of hiding my financial impotence, even from my wife. I kept the books. I kept her in the dark.

People don’t mind talking about the problems with politicians, sport figures or celebrities, but we seem to have a hard time talking about out own financial struggles. One study showed that couples would rather talk about sex or infidelity than how to handle the family’s finances or how much money they earn.

Pay attention to your money habits. People assume they know what they spend their money on, but one study showed that 70% of people have never balanced their checkbook. Another showed that people underestimate the amount of credit card debt they owe by a third. The best way to figure out what’s important to you is to check your credit card bill and checking account statement every month. Budgeting is a four letter word for many, but just having an understanding about where your money is going and how it’s being spent can be eye-opening.

Have a plan, even if it’s a bad one. This stuff isn’t easy, but it’s impossible if you don’t sit down and draw up a plan about where you are and where you’d like to be to figure out how to get there with your finances. Getting started is half the battle.

Both pieces are worth a read:
The Secret Shame of Middle-Class Americans (The Atlantic)
4 Men with 4 Very Different Incomes Open Up About the Lives They Can Afford (Esquire)

Further Reading:
How to Teach Your Children About Money