In a recent Q&A with Patrick O’Shaughnessy, I said the following when asked about the momentum factor:

I’m a huge fan of the momentum factor, mainly for its diversification benefits. It’s also the least understood of the well-known risk factors. I’ve done a ton of work on momentum in my day job, but haven’t been too impressed with the retail products available. Most cost too much or they’re not tax efficient because it’s a higher turnover strategy.

One of the reasons I think momentum is so widely misunderstood is because not enough advocates of the strategy have explained it well enough (although maybe that’s on purpose). It’s also counter-intuitive to almost every other strategy out there, which can make investors uncomfortable if they don’t know what they’re doing.

Even if you aren’t a practicing value investor, the value anomaly is easy to explain — buy at a discount and then wait. The momentum factor is based on buy high, sell higher or alternatively, cut your losses and let your winners run. Value investing is based on a long-term reversion to the mean. Momentum investing is based on that gap in time that exists before mean reversion occurs. Value is a long game, while momentum is usually seen in the short- to intermediate-term.

Another misunderstanding comes from the fact that investors are constantly told that it’s a huge mistake to chase performance. And it is a terrible idea to chase performance if you don’t know what you’re doing or why you’re doing it. Momentum is chasing performance, but in a systematic way, with an entry and exit strategy in place. Momentum tries to take advantage of performance chasers who are making emotional decisions. This is why the best momentum investors use a rules-based approach, to avoid those emotions.

Here are the long-term risk premium numbers from the Fama-French database, courtesy of Larry Swedroe and Andrew Berkin: 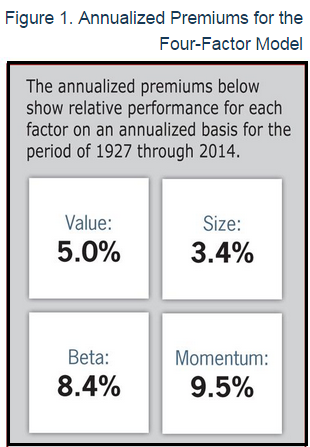 As with any strategy that has been proven to work historically, there are usually two explanations given — either the strategy takes more risk and is compensated for those risks or there are behavioral factors involved that allow the premium to persist. To me, the behavioral explanation always makes more sense, because really the only way for one investor to outperform is for another investor to underperform. To do better you have to be able to take advantage of someone else’s mistakes. This is the foundation that any viable long-term investment strategy rests on.

There’s a laundry list of mistakes and behavioral biases that investors exhibit that have been covered in detail here and elsewhere. Many of these emotional responses and mistakes are the very reason that momentum works. Research shows that investors hold onto losing stocks too long in hopes they will come back to their original price while selling their winners too early. Investors also anchor to recent results, so initially markets underreact to news, events or data releases. On the flip side, once things become apparent, investors herd and overreact, causing an overshoot in either direction. Fear, greed, overconfidence and the confirmation bias can lead investors to pile into winning areas of the market after they’ve risen or pile out after they’ve fallen.

All of these behavioral issues can lend a helping hand with short- to intermediate-term momentum in markets for those who are willing and able to take advantage. Basically, momentum tries to benefit from irrational market participants. This can be easier said than done as these trends don’t last forever and can have swift reversals when they do come to an end after they overshoot.

There’s a huge body of research to back this up, but you’d be hard pressed to find many average investors who actively seek out the momentum factor. Other than the fact that it’s misunderstood by most investors and counter-intuitive, momentum can also be a high turnover, high cost strategy to implement if not done the right way. As I said to Patrick, there really aren’t that many retail products available at a low cost that make sense for investors to legitimately invest in this risk factor. Momentum typically involves high turnover in holdings over short time periods, which can lead to increased costs and tax inefficiencies if used in the wrong structure. Momentum can also lead to severe drawdowns, often larger than the overall market, at the inflection points. As usual, nothing works all the time.

In my next post, I’ll explore Gary Antonacci’s book, Dual Momentum, which explains the two different types of momentum — relative and absolute. Antonacci has also devised a system that tries to minimize the flaws that are seen in most momentum investment strategies, so I’ll explore Dual Momentum in more detail to see how it works.