A couple weeks I looked at the history of corrections in long-term U.S. treasury bonds. I received a few follow-up questions from people asking for the same information on intermediate bonds for a comparison between the different bond maturities from a risk perspective.

The Barclays Aggregate Index, the industry standard for an intermediate bond benchmark, only has a data going back to 1976 so you don’t get the full history all the way back to the 1920s. But you still get a good sense of the risk differential between bond duration and maturities when looking at this losses:* 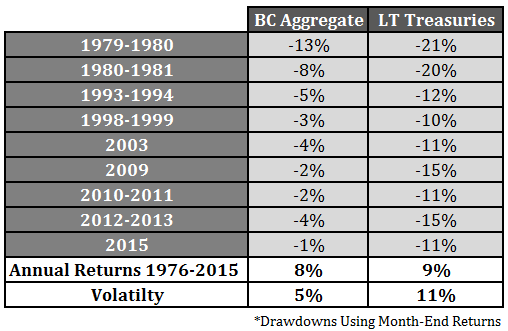 The average double digit loss since 1976 in long-term treasuries was -14% while the average loss in the BC Aggregate during these drawdowns was just -4%. So the losses in the BC Aggregate were roughly 70% lower, on average, with around half the volatility. But the returns were nearly 90% of the long-term treasury performance numbers. So to earn slightly better performance numbers, an investor would have had to deal with much higher volatility and much larger losses in long bonds.

It’s also worth noting that there’s a huge caveat on these return figures. Fixed income returns in the 8-9% range on high quality bonds over four decades are a historical aberration based on the huge yields seen in the late 70s and early 80s along with a fall in rates ever since.

The starting yields for both intermediate and long bonds in 1976 were close to 8% and peaked at over 15% by 1981. The current yields are in the 2-3% range, which means there is a much smaller buffer from the income payments when interest rates do rise and prices fall. Bond investors always have to remember that the long-term returns will track their starting interest rate fairly closely.

If you’re a trader, it’s possible long maturity bonds make sense if you can ride the trend and get out before a large loss. If you’re a long-term investor, I think you really have to consider the risk-reward relationship in long-term bonds. When rates were much higher it’s possible that long maturity bonds were worth the risk. For many investors, it may not make sense to invest in long-term bonds at today’s yield levels and maybe any yield levels if you cannot handle large losses in fixed income.

Further Reading:
A History of Bond Market Corrections
What Returns Can Investors Expect in Long-Term Treasuries?

*These drawdowns are calculated using month-end data so they don’t count the continued decline in long-term treasuries in May which has seen them fall an additional 5% or so. The BC Aggregate is down roughly 1% this month.