One of the most heavily debated topics in retirement planning is figuring out the safe withdrawal rate. The general rule of thumb is 4% of your portfolio, but if you have the bulk of your assets in tax-deferred accounts such as a 401(k) or IRA, the government makes it easier on retirees to figure out their withdrawal rate once they turn 70 through required minimum distributions (RMD).

At age 70.5, you have to take distributions from these accounts because the government would like to collect taxes on your gains. Here are the RMD distribution rates by age: 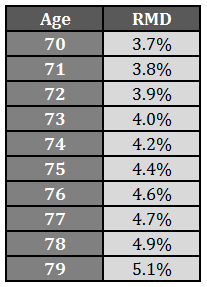 I decided to take distributions from either the stock or bond allocation depending on which one had the better gains each year. There was also am annual rebalance to bring the allocation back in line with target allocations and the RMD was taken out at year end. Let’s see how things would have looked with this strategy over the past decade, starting in 2005 going through the end of 2014 using a $1,000,000 starting portfolio value. Here’s the 60/40 portfolio:

The highlighted ending values show where the RMDs came from each year. You can see that the majority of the distributions were taken from stocks, while bonds picked up in the slack in 2008 and 2011 when stocks fell. Things worked out pretty well with this strategy considering the huge loss in 2008. The balance still grew by over one-fifth even after taking a decade’s worth of distributions.

RMDs were taken from the same places, but there were far fewer fluctuations in the portfolio’s value because of the fixed income tilt. On the other end of the risk spectrum, here’s a stock-heavy 80/20 portfolio:

These three scenarios do a great job illustrating the general risk-reward relationship in the markets. All three portfolios took distributions of close to half a million dollars over the 10 year period, but the 80/20 portfolio showed an ending balance of nearly $100,000 higher than the 40/60 portfolio and about $36,000 more than the 60/40 mix.

But the ending balance will always depend on where we’re at in the cycle. The 40/60 portfolio fell just 16% in 2008 while the 80/20 portfolio was down more than 30%. The 60/40 allocation fell 25%. Including the RMDs, here were the annual returns for each portfolio over ten years:

It would be a mistake to make a portfolio asset allocation decision based on the highest ending balance or annual return. Each individual has to figure out how to balance returns with their sanity depending on how much risk they’re willing and able to take. Holding an 80/20 portfolio might work out in the end, but not if you give up on it in 2008 and sell all of your stocks. You’ll notice that the 40/60 portfolio had a balance that was more than $120,000 higher than the 80/20 mix by year-end 2008.

There are a number of other ways to take your retirement distributions, so this is just one example. The rebalancing period could be changed or even where and when you take out the cash. This is simply for illustrative purposes to see how this type of strategy would have worked out over the past decade. As with all strategies, the investor has to go with the one that makes sense for them. You have to be able to follow through on a plan consistently because the future won’t play out exactly like the past.

*For the 60/40 portfolio the allocation was 40/20/40, respectively. For the 40/60 and 80/20 portfolios, the U.S./Int’l ratio was kept in the same proportion of 2/3 US and 1/3 international for stock market allocation. The ending value in stocks and bonds are shown after the RMD and annual rebalance. The usual disclaimer applies here — do what works for you and don’t plan on future returns looking like they did over the past ten years. Feel free to let me know if there are any problems with my calculations.