A funny thing happened as the end-of-the-world crowd was busy predicting a collapse of the U.S. dollar caused by the Fed’s monetary policies – the dollar has rallied mightily. Karen Damato at The Wall Street Journal ran a very telling chart this week that shows the effect the dollar’s rise has had on foreign stock performance: 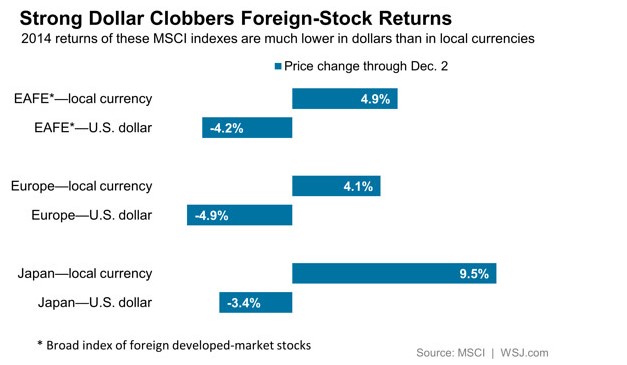 Most investors don’t spend a lot of time thinking about currency exposures because once you finally spend down your portfolio, you do so in your local currency. But as you can see from the chart, currencies can have a big impact on performance.

While these foreign markets are performing reasonably well in their local currency, when translated into U.S. dollars, they are losing money. For the uninitiated, when you buy shares of an international stock fund, the returns must get translated back into your own local currency.

Think about when you travel abroad — with a rising dollar, your money goes further because your dollars buy more of the local currency. In the reverse situation, it’s more expensive for foreigners when they travel to the U.S. Any U.S.-based investor with holdings in international stock funds is in the same position as a foreigner from a currency perspective. When the dollar rises, there will be a foreign exchange loss in international stock holdings. It just so happens that this loss has been fairly extreme this year. Just look at how wide those spreads are.

These trends go in both directions and a falling dollar has been a huge tailwind to foreign stocks in the past. Jeremy Schwartz of WisdomTree has been all over the impact of the U.S. dollar on international stocks the past few years. Here’s a graph he shared in a research piece a couple of months ago that shows the currency impact over a longer time frame:

You can see the performance boost that a falling dollar provided during the late 1980s and mid-2000s for U.S. investors in international stocks. Schwartz noted in his piece that over 40 years, U.S. investors have been rewarded with a 1.6% annual increase from foreign exchange movements (meaning the dollar has declined by 1.6% per year over this time).

WisdomTree is one of the few fund shops that offers currency-hedged products. So their ETFs have no currency impact one way or another, meaning investors would simply receive the total returns of the local stock market.

The most recent action in the markets always seems like it’s the most important because it’s fresh in our memory, but there are a few things to consider before thinking about hedging your currency exposure to international stocks.

If you think it’s difficult to predict the movements of the stock market or interest rates, the currency markets are probably even harder to forecast. They’re open 24 hours a day. The foreign exchange market is by far the largest market in the world in terms of trading volume. Currency hedging isn’t something you take up as a new side hobby.

Trying to go back and forth between being hedged or unhedged is probably a bad idea. This is especially true after we’ve just witnessed a big move. While the trend can most certainly continue, there are far too many factors involved when making the hedge or unhedged decision on a consistent basis for the average investor.

Also, foreign exchange hedging is not free. It does come at a cost (although this year it’s been worth the price of admission).

There will certainly be regions where it will make sense to hedge currency risk. And while there are a few investment firms that can game these movements, the majority of investors would be wise to simply pick one strategy and stick with it over time. Make your hedged or unhedged decision upfront and don’t try to guess which way the dollar or some foreign currency is going to go next. This not only lowers the risk of mistiming a currency move one way or another, but it also reduces the impact on your portfolio over time as the cycles will more or less cancel each other out in a globally diversified portfolio.