The best thing I read this week comes from Bob Maynard, CIO of the $14.2 billion Idaho Public Pension Plan. Maynard’s entire approach is based on the premise that increased complexity is failing professional investors.

Instead of fighting complex markets with complex strategies, Maynard favors a simpler approach, as he states in a write-up for Chief Investment Officer:

However, a complex investment world does not require a complex response, either in the nature of the investment organization or the particular investment strategies chosen.

The cockroach lives in a highly complex environment with one of the best long-term success rates of any creature. Yet it has only one defense mechanism – running in the opposite direction from a puff of air. The equivalent for the investment world is, at the core, a very simple structure founded upon public market diversification with one basic defense mechanism: see a volatile movement, react in the opposite direction (i.e. rebalance into it). A simple structure and strategy, if adhered to, has one of the best chances of surviving for many decades.

It’s difficult for intelligent people, especially in the world of finance, to admit that less is more and simple can be a far more effective framework than complex for the majority of investors. Some view this as an admission of ignorance. In fact, I view it as the ultimate sign of intelligence. Understanding your limitations is one of the best ways to improve.

Maynard goes on to compare the short-term moves in the stock market to an earthquake, an apt analogy. Here’s what the seismic activity during an earthquake looks like: 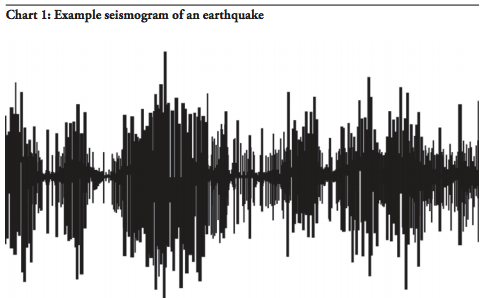 Now compare that to the daily moves in the stock market: 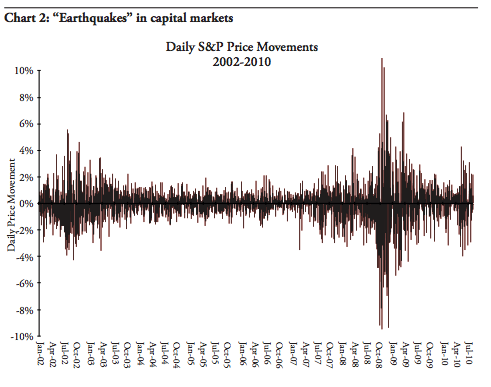 It looks eerily similar. Although the market is more or less random on a daily basis, these short-term moves do have an impact on returns: 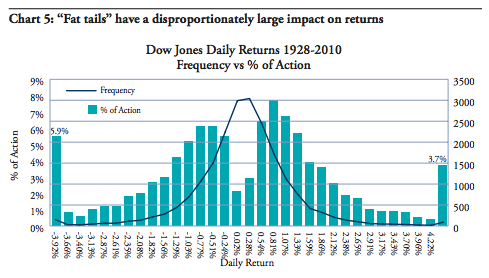 The fact that we’ve had so many fat tail events over the past couple of cycles has pushed most investors to focus even more on the short-term behavior of the markets.  But Maynard’s conclusion is that, just like an earthquake, it’s impossible to predict with any precision when the next market correction or crash will hit.

Ralph Wanger, the eccentric portfolio manager of the Acorn Fund, once summed up the stock market to Bill Bernstein with an analogy about walking a dog:

He likens the market to an excitable dog on a very long leash in New York City, darting randomly in every direction. The dog’s owner is walking from Columbus Circle, through Central Park, to the Metropolitan Museum. At any one moment, there is no predicting which way the pooch will lurch. But in the long run, you know he’s heading northeast at an average speed of three miles per hour. What is astonishing is that almost all of the market players, big and small, seem to have their eye on the dog, and not the owner.

Maynard is focusing on the owner, but most investors are preoccupied with the dog. It’s easy to say you should ignore the noise in the markets, but this is nearly impossible in today’s world because information is all around us. Your plan should include ways to eliminate the amount of noise that finds it’s way into your portfolio, even though you’ll never be able to completely escape it. The trick is being able to sift through the noise and figure out the difference btetween what’s actionable and what’s entertainment.

This is why portfolios should be managed for risk, not returns, a simple yet important distinction.

Sources:
The Four Pillars of Investing
Managing Risk in a Complex World