Earlier in the year many investors were under the impression that something had to give because stocks and bonds were both rising.  I looked at the historical data on positive stock and bond returns to show that this is more common than most investors assume: 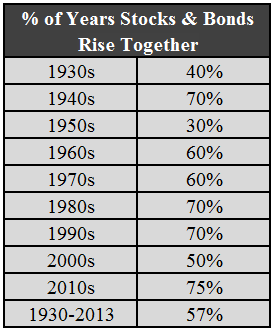 Since performance has been so strong in both stocks and bonds during this cycle, the chorus continues to grow for lower returns going forward for both, something that’s not out of the realm of possibilities. This brings up the question about how often stocks and bonds decline at the same time to prepare for the possibility.

It’s actually extremely rare on an annual basis historically when looking at the S&P 500 and 10 year treasuries from 1928 to 2013:

It’s only happened three times and the last occurrence was in 1969. That’s less than 4% of all annual periods, an impressive record.

Breaking it down a little further, when we look on a quarterly basis, stocks and bonds have fallen together more often.  Going back to 1976, using the more diversified Barclays Aggregate Bond Index, here are the 14 instances where both fell: 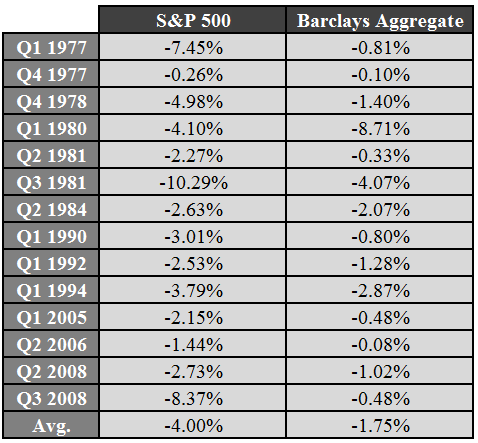 That means about 9% of all quarterly periods saw both go down together.  It’s interesting to note that since the inception of the Barclays Aggregate Index, the two have never declined during the same annual period. Hard to believe but true.

Obviously, although something is rare, doesn’t mean it can’t happen in the future. But these numbers show the benefits of utilizing different asset classes to smooth out your results.