Morningstar had an interesting piece out this week about the alternative mutual fund universe. While Morningstar studies have shown that the most dependable predictor of future fund performance is low expenses, investors in this universe of funds aren’t following that advice:

From 2011 to 2013, only 36% of the net $58 billion that has flowed into alternative mutual funds has gone to funds in the cheapest quintile.

Here’s why this may be the case:

The recent stampede into Bronze-rated MainStay Marketfield (MFLDX), which has swallowed up one fourth of the $58 billion of net inflows since 2011, is a good example of money going after good returns. The $18 billion fund isn’t cutting investors any bargains. It has an expense ratio of 1.52% for its institutional share class, which falls right in the middle of similarly distributed alternative funds, despite its being the group’s largest.

To put this performance chasing into perspective, check out this graph from my friend Jake (follow him on Twitter @EconomPic) on the relationship between fund performance and the growth of fund assets: 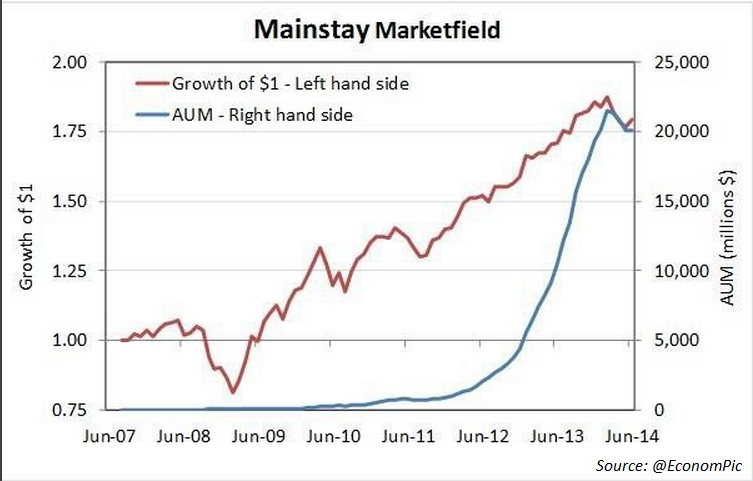 The Mainstay Fund has been one of the best performing funds in its category so investors have predictably piled in.

Fundraising is aided by the fact that the fund’s mandate allows it to invest in not only stocks but also bonds, commodities, futures, options, and even ETFs. The portfolio managers also have the option to go short to try and profit from down markets. This is the holy grail for investors and obviously, they don’t mind paying for it.

Most investors probably don’t understand what they’re getting themselves into with a fund like this. Investing in products you don’t understand can lead to familiar poor behavior. The Morningstar investor and fund return comparison show how this type of strategy can magnify buy high, sell low issues:

The three and five-year numbers for this fund are some of the worst I’ve seen on a behavior gap basis, underperforming actual fund returns by 6-7% annually.

These types of funds can be difficult to benchmark because they’re meant to behave differently than the typical stock or bond fund. This can cause investors to alter behavior if they don’t have the correct expectations.

The problem with a market timing, long/short strategy like this is that investor misbehavior gets amplified. You end up trying to time the timing of the fund which leads to what Charlie Munger calls the lollapalooza tendency when a confluence of psychological factors can act against you all at once.

It remains to be seen what the future returns will be from the Mainstay Fund after the large inflow of new money. Future fund returns won’t matter if investors continue to chase past performance.