“Temperament is more important than IQ. You need reasonable intelligence, but you absolutely have to have the right temperament. Otherwise, something will snap you.” – Warren Buffett

There’s a great scene in the movie Zero Dark Thirty where all of the top CIA operatives hunting down Bin Laden get together to discuss their options once they feel they’ve possibly located the compound where he’s hiding out.

The director of the CIA (played by the late-great James Gandolfini) goes around the table and asks for everyone’s opinion on how certain they all are that it’s actually Bin Laden since they can’t get visual confirmation.

His deputy director says, “We don’t deal in certainty, we deal in probability” before asking for everyone’s estimates (that’s a great quote for investors).

After hearing out everyone’s arguments Gandolfini is walking out of the meeting with one of his aides. He asks him for his thoughts about the lead analyst on the case who says she’s absolutely sure Bin Laden is there. The guy says he thinks the CIA analyst is very smart.

At the top of the CIA hierarchy, everyone has a high degree of intelligence. You can’t separate yourself by sheer intellect alone when everyone else in the room is just as smart as or smarter than you are.  Once a certain level of intellect is reached, you start to see diminishing marginal returns.

This is the paradox of skill that Michael Mauboussin described in The Success Equation. Here’s Mauboussin with more on this from a Credit Suisse follow-up piece to the book:

If the variance in the skill distribution is shrinking and the variance in luck is stable, luck plays a growing role in shaping results. An absolute improvement in skill, when combined with a relative decline in the range of skill, means that luck is more important than ever. This concept is called the “paradox of skill.”

The paradox of skill says that in activities where results combine luck and skill, luck is often more important in shaping outcomes even as skill improves. In many competitive interactions it is the relative level of skill that matters, not the absolute level of skill. In many fields, including investing, the dispersion of skill is shrinking, which leaves more to luck.

When everyone in your field of choice is intelligent it’s much harder to separate yourself from the crowd.  The paradox of skill is what makes it so difficult to beat the market over time.  Finding undervalued assets isn’t as easy today as it was in the past because there are more smart people who know where to look.

Mauboussin shows how the increased skill in the industry has reduced the amount of excess returns by active managers as more competition has narrowed the level of outperformance: 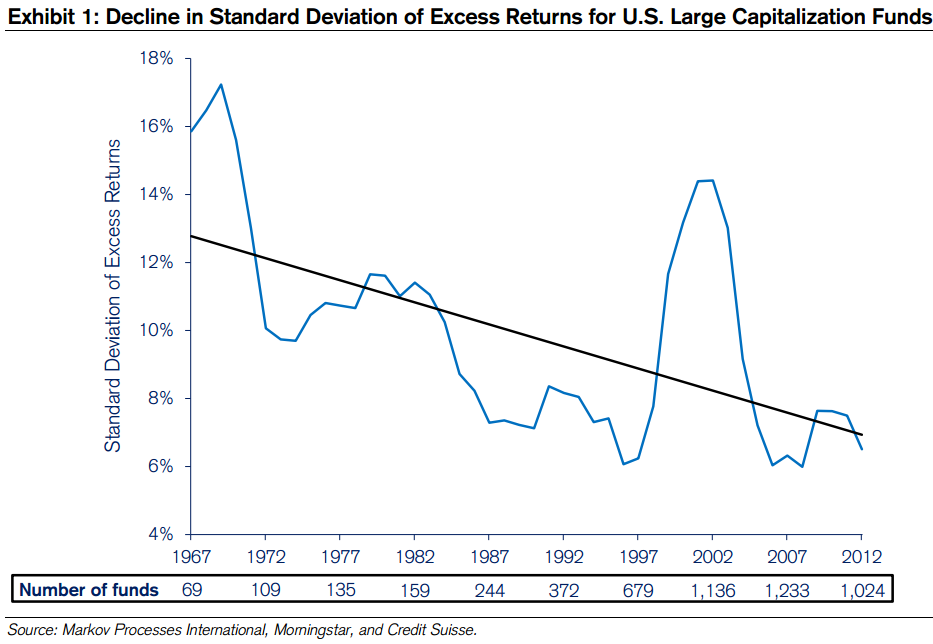 The competition isn’t going to stop anytime soon either.  There were roughly 12,000 CFA charterholders in 1990. Today there are more than 120,000. There are also over 150,000 MBA graduates each and every year.  Hedge fund manager Renaissance Technologies employs nearly 100 Ph.Ds. on staff in such areas as quantum physics and artificial intelligence.

Henry Blodgett discussed this dynamic with Nate Silver in The Signal and the Noise:

He went to Harvard and has been doing it for twenty-five years. How can he not be smart enough to beat the market? The answer is: Because there are nine million of him and they all have a fifty-million-dollar budget and computers that are collocated in the New York Stock Exchange. How could you possibly beat that?

Beating the market and your investing peers is hard, but it’s probably harder now than it’s ever been.  This is particularly true over shorter periods.  Arbitrage opportunities to profit from short-term divergences have to be much smaller in today’s markets because so many investors are looking to exploit them.

Once a strategy becomes well-known through academic research and historical back-tests there are going to be more investors interested in that part of the market.

The very best investors in the world understand this and stay out of the short-term game because they know it’s impossible to do on a consistent basis.  The best way to succeed is to arbitrage the long-term that so many investors ignore through patience, discipline and a recognition of mistakes.

Too much intelligence can actually be a problem if you don’t recognize the fact that even the smartest people make mistakes and have their own set of biases.  This is part of the Charlie Munger approach:

It is remarkable how much long-term advantage people like us have gotten by trying to be consistently not stupid, instead of trying to be very intelligent.

Emotional intelligence and self-awareness are the attributes that separate the truly intelligent investors from those that are just well-educated.

Intelligence can be a very seductive quality, especially when money is involved.  It’s an important quality to look for but it’s not the only deciding factor in successful investing.

Source:
Alpha and the paradox of skill (Credit Suisse)

Further Reading:
Index funds and the paradox of skill