“Conventional valuation is established by the mass psychology of a large number of ignorant individuals…the market will be subject to waves of optimistic and pessimistic sentiment.” – John Maynard Keynes

The American Association of Individual Investors publishes their investment sentiment survey on a weekly basis. They poll individual investors to get a sense on whether they are feeling bullish, bearish or neutral on the stock market at the moment. The results reveal the percentages of investors in each of the three camps.

Here are the results of the survey going back to 2009 for both the bullish and bearish responses along with the performance of the S&P 500: 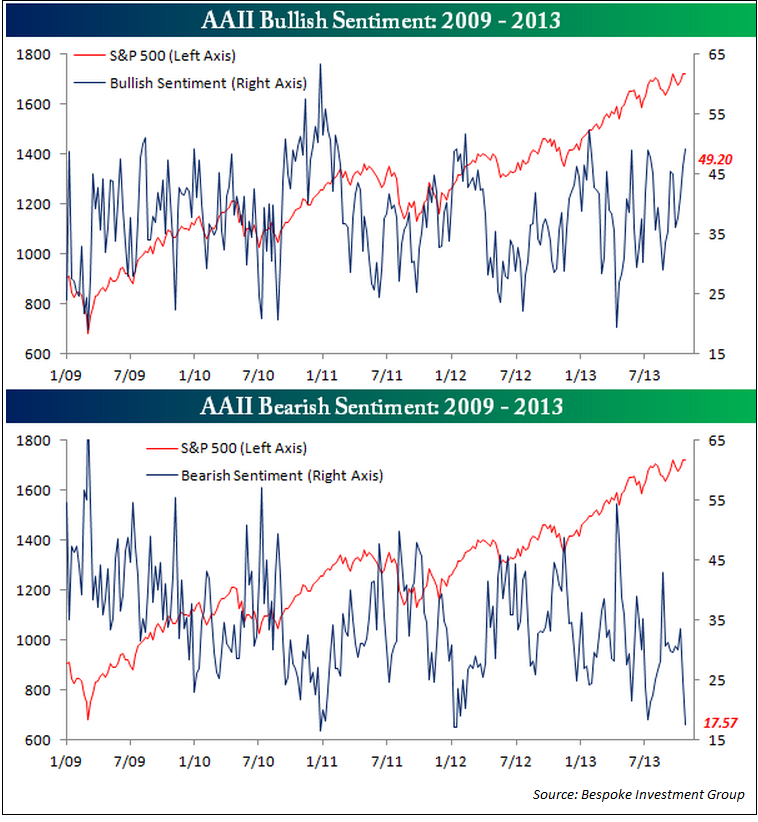 Just look at the variation in the levels of bulls and bears. The fluctuations are massive.

By now every knows Warren Buffett’s line that you should be greedy when others are fearful and fearful when others are greedy but, boy, is it hard to put into practice or what?

We’ve had some bumps along the way, but for the most part, this has been a fairly straight shot up for the stock market since early 2009. Yet the bearish sentiment continued to hit extremes at multiple points along the market’s rise.

So why is this the case and what can you do about it?

Obviously, it’s very difficult to detach your emotions from what’s going on around you. There wasn’t a green light at the bottom that showed an all clear sign. The economy has continued to struggle and investors are still scarred from the two previous market crashes.

If you made your investment decisions every week based on whether you were feeling bullish or bearish on the market, you would be jumping in and out based on what happened the prior week. At that point, you’re probably better off following the George Costanza advice of doing the exact opposite your instincts.

You must have a long-term perspective on the markets. You need to have a greater sense of history than last week or even the past few years.

Markets tend to trade in both long and short-term cycles. But investors don’t think about this when the markets is rising or falling RIGHT NOW. Emotions take over.

Which leads to this graphic by Carl Richards: 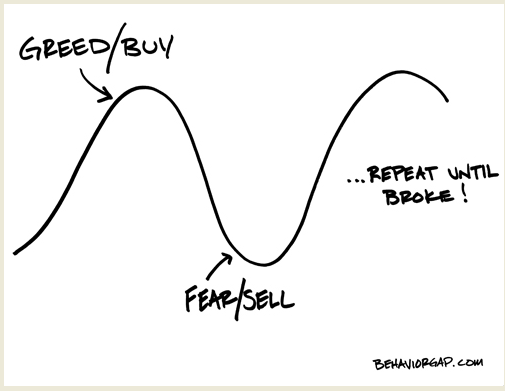 If you would have known that after a 50% decline in stock prices markets have historically shown a median gain of 75% it wouldn’t have been nearly as scary putting your money to work in 2008 and 2009. Or that the average gain in the first 12 months of a bull market has been nearly 50%.

There are also long periods of time where the stock market is volatile but doesn’t really go anywhere. This is what happened after large gains of the 1950s and 60s. From 1966 to 1982, US stocks were basically unchanged.

This period of low market returns set the stage for the enormous bull market that lasted from 1982 to the year 2000.

Again, investors got ahead of themselves and stocks didn’t really go anywhere from 2000 until early 2013. We could still be stuck a sideways volatile market of ups and downs for a while, but eventually the markets will take off again.

Probably when investors are at bearish extremes once again.

Further Reading:
Can the weather move the stock market?