“Hindsight, the ability to explain the past, gives us the illusion that the world is understandable.” – Daniel Kahneman

“Those classes of investments considered ‘best’ change from period to period.  The pathetic fallacy is what are thought to be the best are in truth only the most popular – the most active, the most talked of, the most boosted, and consequently, the highest in price at that time.” – Fred Schwed, Where are the Customer’s Yachts?

Every fund company or financial advisor hits you with the “past performance is not indicative of future performance” line when you look at their historical results. They mainly do this because it’s required by the SEC. But is it true?

Standard & Poors has an interesting study that it releases twice a year that looks at the consistency of the top performing mutual funds. Basically, they look over multiple time frames to see if the top performers can repeat their past success.

The numbers get even worse over 5 years. Here’s a graph I created based on the numbers: 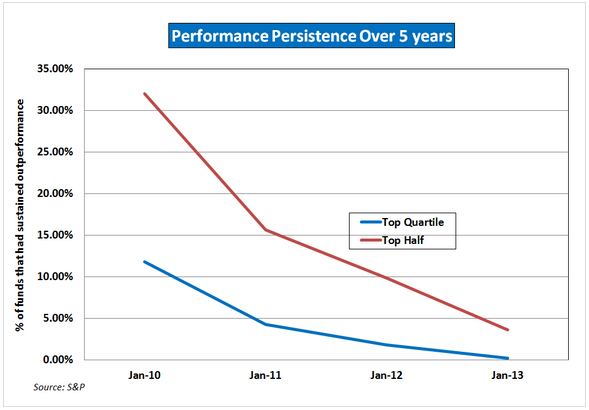 This graph shows the number of funds in the top 25% and top 50% of US equity funds that started out in March of 2009 and continued to in those categories through March of 2013. You can see that the number of funds that were able to continuously outperform dropped substantially each year until it the original top performers were almost non-existent.

FADS COME AND GO
No investor is perfect so these numbers aren’t too surprising as periods of outperformance are usually followed by periods of underperformance. Even the best investors are bound to slip up, which makes it difficult for average investors to know if they should stay with an underperforming fund or move on to a new investment.

Where this becomes a problem for investors is when they try to chase hot funds. The way it usually works is that a fund outperforms, investors pile in after the fact, and then the fund predictably underperforms. This leaves those investors thinking ‘now what?’

That’s why it’s so hard to play the musical chairs game of picking the best funds or strategy year after year.  Market participants adapt very quickly to new information so if there is a strategy (think low volatility, dogs of the Dow, sell in May, etc) that has worked well in the past it quickly gets discovered by investors.

Warren Buffett once said the “If past history was all there was to the game, the richest people would be librarians.”  A historical context helps, but mostly for overall markets, not necessarily individual strategies or funds.

Strategies that outperform are usually discovered by investors right as they are about flip the switch to underperformance because investors don’t get excited about an investment strategy until it has shown periods of solid performance.

And Wall Street knows all too well that investors react this way so they create investment products (especially ETFs) that get everyone excited about the latest great investment idea.  I have an easy rule to help keep you safe from Wall Street in these types of investments: Never buy newly released products with a short history.  They are only created to squeeze more money out of an idea that is already past it’s prime.

Just as fashion trends go out of style only to come back into vogue 30 years later, so too do tried and true investment strategies.  But they tend to go out of style right after everyone has jumped in and come back only when no one wants anything to to with it.

That’s how the cycles work.

PROCESS OVER SHORT-TERM OUTCOMES
Over longer time frames process matters much more than outcomes. Have a long-term rules-based process and positive outcomes should eventually follow.

Make sure you have a diversified rules-based approach that you can follow through different market cycles. There will be times when you underperform certain markets. Know this ahead of time and plan on it happening.

The is no strategy that always works all of the time.  Markets don’t work that way.  Not in the world-is-flat, information is everywhere age that we live in.  By the time you hear about a winning strategy, it has probably run its course.

The most efficient and effective investment strategy for most people involves dollar cost averaging, diversification to broad global markets and a systematic rebalancing plan. You can get out of the performance chasing rat race by simply owning all of the asset classes.  The problem is that this is a boring plan. People are hard wired to look for excitement and a disciplined plan doesn’t offer that.

It’s much more fun to look for the hot hand that will lead to riches. Unfortunately, investors that spend their time constantly searching for the best performing fund will be one step behind and constantly chasing past performance.

If you are in active funds, make sure you aren’t using past performance as a guiding factor. Choose the funds that have the lowest fees and don’t try to outsmart yourself by trading in and out each year based on historical performance.