This week marks the 31st rendition of the series that’s now the longest-running cable TV event in history which has been viewed by millions of people all around the globe.

Shark Week first appeared all the way back in 1988.

The series was originally about promoting the conservation of these animals and clearing up any misconceptions but that’s not what the majority of viewers take away from the show.

Researchers performed a study of different groups of people to record how watching Shark Week would affect their perception of sharks. They found the more people watched of Shark Week the more scared they became of sharks. This was the case even when statistics were given about how few shark attacks there are every year.

People don’t respond to statistics. They do respond to video of an enormous animal with a scary fin and huge teeth that could potentially rip you to shreds.

In some of the talks I give I discuss this phenomenon and ask the crowd what they think the world’s most deadly animal really is. I’d say roughly one-third of the groups I talk to know the real answer: 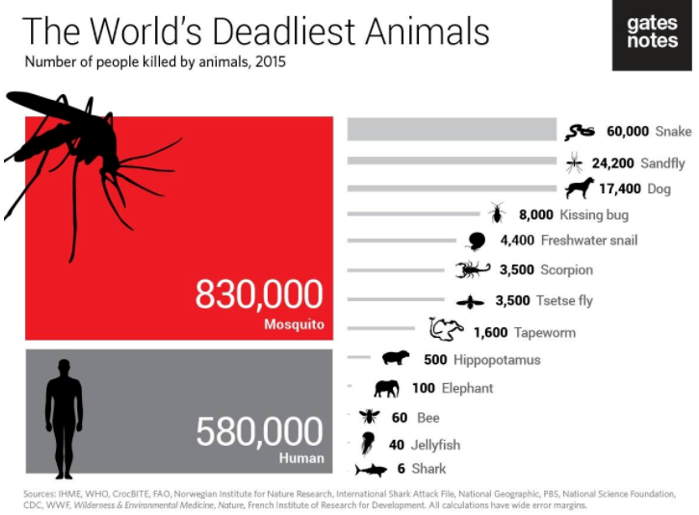 I don’t think Mosquito Week would have the same cache as Shark Week but humans are far more likely to die from a tiny mosquito bite than a reenactment of Jaws.

Lightning kills about 46 people a year while deer that cause accidents kill another 150 or so. More than 300 people drown in the bathtub every year.

I could really tie up this analogy into a neat bow if only there was a place where people misperceive the risks involved. Where they become swayed by scary narratives, headlines, and graphics instead of paying attention to the evidence, probabilities, and statistics. A place where people fall prey to the constant drumbeat of scare-tactics, noise, and clickbait to make decisions.

The stock market is positive roughly 54% of the time and negative 46% of the time on a daily basis. When you factor in the fact that losses sting twice as bad as gains feel good from our inherent loss aversion, this means the stock market will make you feel terrible every single day if you’re checking performance that often.

The more you look the more scared you’ll become.

This same phenomenon plays out on the nightly news as well. By nearly every important metric imaginable, the world is getter better, but you would never know this by watching the news or reading the latest commentary on social media.

The mosquito chart from above came from Bill Gates in his annual letter about his foundation. Gates had a wonderful quote which sums this up nicely when he said, “Headlines, in a way, are what mislead you because bad news is a headline, and gradual improvement is not.”