Fargo is in the conversation for the best show on TV right now. I just finished up with the third season which, like the first two seasons, had a great combination of suspense, dark humor, crime, solid characters and a heavy dose of Minnesota accents.

In one of the best scenes in the season finale Nikki Swango, a fugitive on the run with a score to settle and a sniper rifle pointed at her head, is talking bridge with V.M. Varga, one of my new favorite TV villains of all-time. She tells Varga that there are hundreds of millions of different hands you can be dealt in the game of bridge (I looked it up and it’s well over 600 billion).

Considering bridge is played with a 52 card deck this is an unfathomable amount of different hands to consider.

In many ways, this is how I view security selection in the financial markets. I was reminded of this while reading a great piece by Jason Zweig this weekend. Using CRSP data, Zweig showed how the number of stocks in the U.S. market has fallen substantially since the late-1990s: 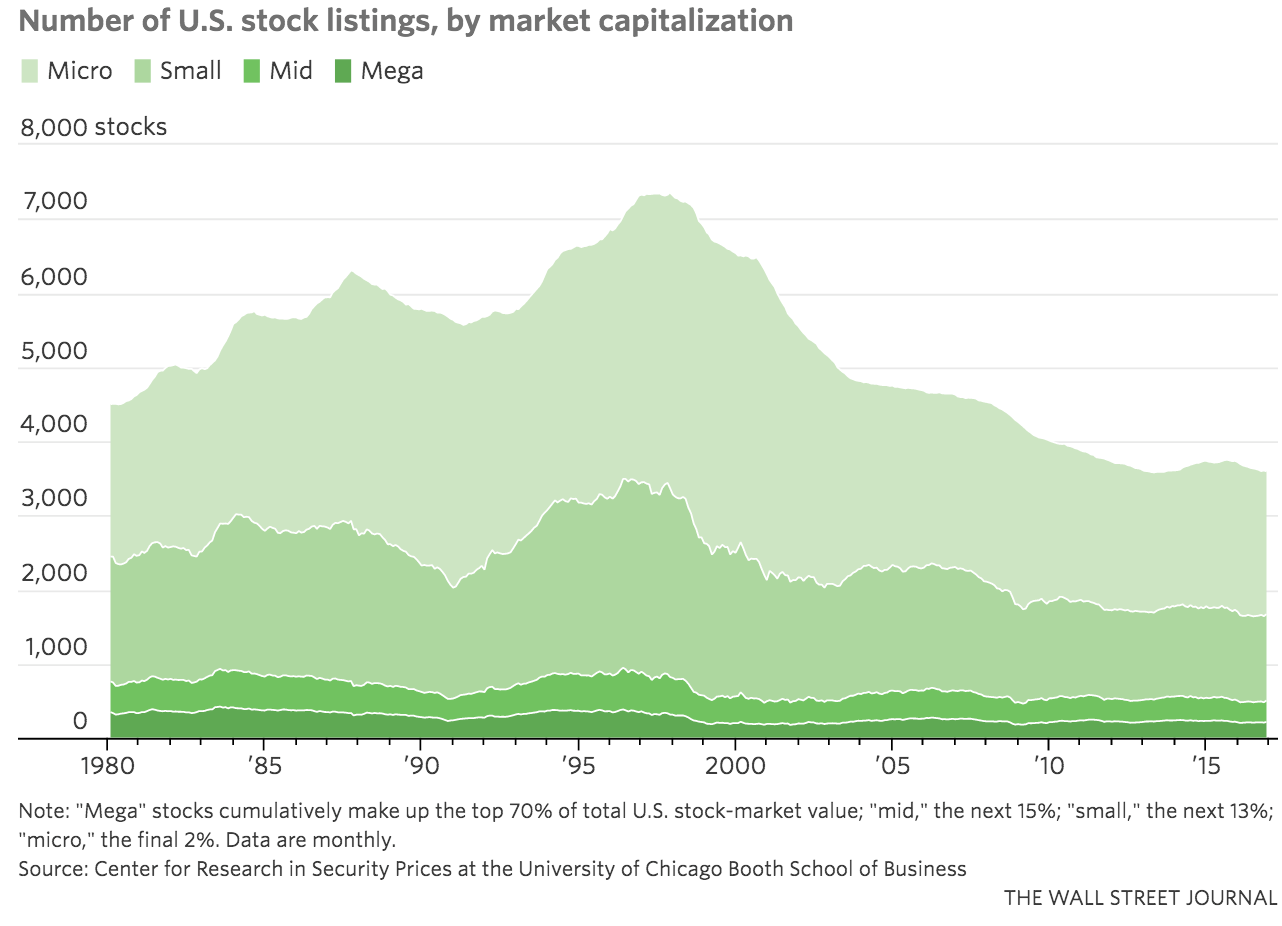 The number of smaller stocks has fallen off a cliff:

A combination of burdensome regulations, increased private equity investment and more controlling start-up leadership have all conspired to decrease the number of small firms entering the public markets. One of Zweig’s conclusions here is that a shrinking number of stocks has made it even harder than ever to outperform because it’s becoming harder to differentiate your stock picks.

While I’m in agreement with Zweig’s assessment I think there could be some other stuff going on here, as well.

Although there are far fewer U.S. stocks, there have never been more fund options available to investors. According to ICI’s 2017 Factbook, as of year-end 2016, there were more than 16,300 mutual funds and over 2,500 ETFs.

Going back to my Fargo bridge stats, while there may be fewer individual listed companies, there have never been so many combinations of stocks to choose from. Stock-picking will likely continue to be marginalized as investors focus more attention on these different combinations in the form of asset allocation, strategies, styles and sectors. Allocation-picking is becoming the new stock-picking.

It’s also possible that the late-1990s were just as much of an aberration with a high number of companies as today is for a low number. There were likely a huge number of small and microcap companies that went public during the dot-com bubble that had no business doing an IPO in the first place. Most of these companies have now been taken private, acquired or gone out of business.

The U.S. is also the outlier in terms of a shrinking stock market when compared to the rest of the world. I’ve used these stats from Dimensional Fund Advisors before but they bear repeating:

Even though the number of U.S. listed companies have fallen significantly in this time, the number of global equities has grown by roughly 10,000 since 1995. And many of these foreign and emerging market stocks are of the smaller variety. The MSCI All Country World Index only counts around 9,000 of the 33,000 total stocks globally as investible in terms of liquidity, volume, market cap and price.

The U.S. opportunity set may be shrinking but globally there have never been more securities available. In many ways, global diversification has never been easier (cost effective) or harder (more choices than ever).

The stock market in the U.S. seems to be something of a winner-take-all with larger companies becoming stronger and stronger. Maybe this makes sense with a more mature economy. But around the world, there are still plenty of smaller companies going public offering investors the opportunity to take part in early-stage growth corporations.

This is one of the main reasons I believe a home bias in U.S. equities could prove to be a poor choice going forward over the coming decades as the developing world plays catch-up.

The U.S. has been the clear winner over the past century. There’s no guarantee this trend will continue. In the words of V.M. Varga, “The past is unpredictable.”

Sources:
Stocks Picking is Dying Because There Are No More Stocks to Pick (WSJ)
Going Global: A Look ay Public Company Listings (DFA)