Just before the market peaked prior to the tech bubble bursting in 2000 Gallup surveyed a group of individual investors to ask for their expected annual stock market returns. On average, these individuals expected the market to return 13.3% over the following year (not even close), but they also expected their own portfolio to earn 15.5%. The same survey was conducted in 2002 — towards the end of the bear market — and investors expected the market to deliver an 8.9% return over the next year. Again, these investors assumed their own portfolios would do even better then average as they expected to see 9.7% gains in their own stock holdings.

The combination of overconfidence and misplaced expectations are a killer in the markets. 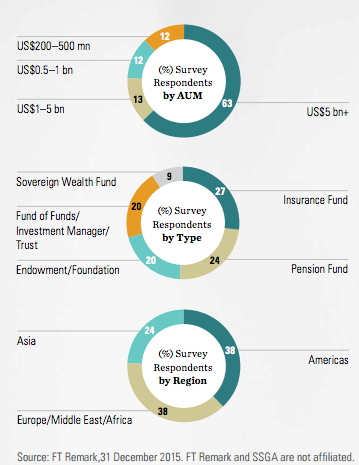 The majority are managing in excess of $5 billion. Here are the forward 5 year return expectations for this group:

These responses are, in a word — ambitious. It’s impossible to predict the future but if investors think they’re going to earn 11%/year over the next 5 years at current interest rate levels then they’re either insane or they’re lying to themselves. And if you look at their own assessment of performance expectations, my guess is that many of these funds aren’t living in reality: 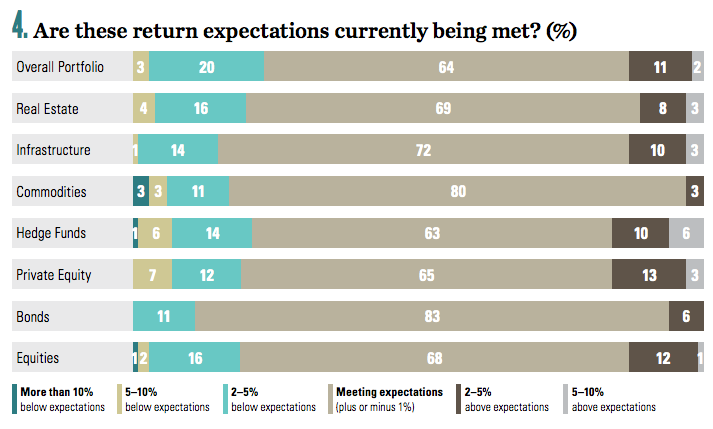 The data would suggest otherwise, but it’s probably difficult for these large pools of capital to admit that they have underachieved. There’s no way that the majority of these investors are meeting or exceeding their unreasonably high return expectations. My guess is they don’t want to fess up to this or have moved the goalposts so many times that they don’t even know when they’re wrong after the fact anymore.

Whether they’re willing to admit it or not, one of the reasons that these investors often underperform simple portfolios is because they are far too impatient and undisciplined. The one party who probably doesn’t get enough blame for active management’s poor performance is the investors themselves. They are constantly chasing past performance by dumping underperforming funds and investing in those funds that have recently done well. It’s a recipe for disaster because you’re always one step behind in both directions as any sort of alpha that does remain in the markets is always going to be cyclical. Just take a look at how impatient these funds are with their investments:

I’m constantly beating the drum on the benefits of a long-term mindset and bemoaning the short-term attitude that most investors exhibit, but even I was surprised by these numbers. Institutional investors have some of the longest time horizons of any group out there, yet they give their investments 1-2 years before looking for a replacement? If you can’t stick around that long you don’t really understand how the markets work or your career risk is too great. In either case, it’s not a wise decision to be so short-sighted. Even 3 years is probably too short of a time frame for most managers to earn their keep considering certain investment styles can see anywhere from 5-7 years (maybe longer in some cases) of relative underperformance.

Add all of this up — unrealistic expectations, a poor appraisal of past performance and a ridiculously short-term mindset — and you have exactly the wrong way to invest. An ever-rising stock market and falling interest rates has probably glossed over any glaring issues that these funds may have had in recent years. That won’t always be the case and eventually these funds will have to face reality. My guess is this will mean some funds won’t be able to hit their spending targets over the coming decades and hard choices will have to be made once they realize that their expectations are totally out of whack.

You can only lie to yourself for so long before reality sets in and the markets don’t cooperate.