Investors throw around the terms bull market and bear market with ease, but there are so many different ways to define them that it can be somewhat confusing. For some reason, a 20% gain is considered a bull market while a 20% loss is considered a bear market. Why not 19% or 21% or another level completely? You got me. And then there are cyclical bulls within secular bears just like there are cyclical bears within secular bulls.

It can also be difficult to define the start of a bull market. Everyone assumes the current run in stocks started when the market bottomed out in early March of 2009. But is that really the start date or should we go by the date when we passed through the previous 2007 high which wasn’t breached until 2013?

There is also an assumption being made by investors that this bull market must “end badly” because they always do. The two prior crashes from 2000-2002 and 2007-2009 are fresh in everyone’s memory so it’s easy to draw parallels to those scenarios after the latest run-up. Good luck going a week without hearing about how eerily similar things are to the tops in 2000 and 2007. Seeing the market get cut in half seems like a natural conclusion to this bull market.

Is it possible we see the market get crushed again? Sure, you can never rule anything out. But can we really draw concrete conclusions about what’s going to happen based on a sample size of two, maybe four if you include the Great Depression and 1973-74? What if this doesn’t end in a crash, but just a run-of-the-mill bear market?

That’s exactly what happened to the enormous bull market of the 1940s, 50s and 60s. Market historians may disagree with the date range of the bull market here, but from 1942-1968 the S&P 500 returned nearly 15% per year. This was a pretty remarkable run over almost 30 years: 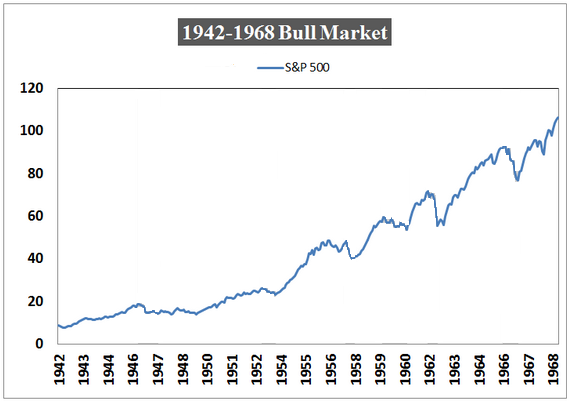 One of the most remarkable aspects of this massive bull market is that it doesn’t get much respect historically. The reason for this is because it never crashed and burned. Investors don’t always remember the big gains, but everyone remembers the market crashes. It’s why 1929, 1987, 2000 and 2007 are discussed so often. Losses leave lasting scars on investors, but not this particular market cycle because you can’t really point to a market-wide bursting of a bubble.

This doesn’t mean there were no losses along the way. There were many bear markets over this time frame:

We should also make a distinction between a bear market and a crash. My made-up definition of a crash would be anything in excess of a 40% loss. A true market crash didn’t occur until the brutal 1973-74 bear market that saw the market fall close to 50%. In fact, from 1938 to 1973 there were zero market crashes. That’s almost 40 years without a single crash in U.S. stocks.

You had the Great Depression that saw stocks fall more than 80% from 1929-32 and then the 1937 echo crash of more than 50% and then nothing for almost four decades in terms of a bubble-induced market crashes.

It would be nice if we knew ahead of time exactly how these cycles will react during their inevitable drawdowns along with pinpoint accuracy on the timing. Many investors seem to think that they know with 100% certainty how this particular bull market will come to an end, to which my reply would be, “good luck.” It’s impossible to predict how much damage a panic in the markets can inflict on the downside. The magnitude and timing of these events is almost impossible to forecast. Ask anyone who’s been calling for a crash since 2009 how that’s worked out.

If your time horizon in the markets can be measured in decades you can be sure that you’ll experience at least one spectacular market crash, probably more. But if you think you know exactly how this current market cycle, or any for that matter, will end you’re kidding yourself. No one knows for sure. That’s what makes the markets interesting.